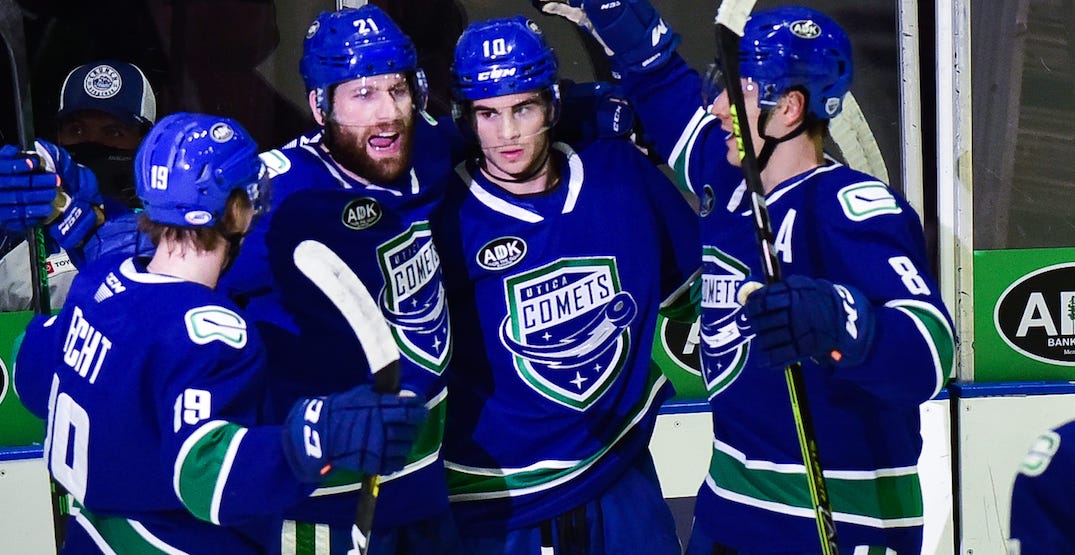 Nearly a week after getting his first NHL call up, Jonah Gadjovich is still in a Winnipeg hotel room, waiting for his chance to realize a dream.

Gadjovich will join the Canucks when they get to the Manitoba capital this weekend, after he has completed his seven-day quarantine, ahead of back-to-back games against the Jets on Monday and Tuesday.

This is hockey during a pandemic, but it doesn’t make things any less exciting for the 22-year-old prospect who had a breakout season in Utica.

Playing in the NHL is obviously a dream for every hockey player, but it’s also true in the literal sense for Gadjovich. After scoring a Gordie Howe hat trick for the Comets last Friday, the 6-foot-2, 209-pound power forward had a good night’s sleep.

In fact, he slept through a call from Comets general manager and Canucks director of player development Ryan Johnson.

“It was crazy… I had a dream that I got called up. So when I woke up from it, I checked my phone just to see if I had any messages and I actually had a missed call from Ryan Johnson and a text saying to call him back. I shot right up,” Gadjovich said in a phone interview with Daily Hive from Winnipeg. “My place in Utica doesn’t have very good cell service, so I’m running around my place trying to get my call to go through.”

When he finally got ahold of Johnson, he was told to get to the airport in Syracuse right away. His flight was leaving in three hours, and Syracuse is an hour away from Utica by car.

He took a step forward last year, but everything has clicked this season, with the Whitby, Ontario native scoring 18 points, including 15 goals, in 19 games.

“I’ve just been more consistent in my game. I thought that last year, I felt like I had a few games where I felt really good. I felt like I could control the puck well, and I was winning more battles, and I had good positioning net-front. I was physical, and I was just playing the game that I needed to play to have success.”

“[Last] summer, all I kept thinking about is ‘I know what I can do, I know what I’m capable of,’ and I just need to have the confidence and the mental power to bring it every night… I knew that coming into this season, I needed to have a change, I needed to be better than I was before. I think that coming into this year I had more confidence, I was more physically and mentally prepared, and I think that showed.”

Gadjovich is big, has good hands, and isn’t afraid to pay the price to score goals.

On draft day back in 2017, when asked to describe his game, he confidently told reporters: “I’m a power forward. I love being in the corners, I’m heavy on pucks, and I make a living in front of the net.”

That was the sign of a player that knows his role on a hockey team. Fast forward to 2021, and he’s still making a living in front of the net.

“I had 15 goals in 19 games and they were all from within a few feet of the net. I’m not dancing around people, toe-dragging. That’s just not my game and I know that. But I know that I can score. I know that I am good in front of the net.”

He’s not kidding. Just look at these goals:

Jonah Gadjovich with his 10th goal in his 11th AHL game.

The man is money in the bank anywhere near that crease pic.twitter.com/bLXMviVIDb

This is one of the prettier ones!
6-1 Comets! pic.twitter.com/QrTs7sQHYq

“It just took me a little bit to find my way in the American Hockey League. If I continue to work at this, I think I can do it in the NHL as well.”

The knock on Gadjovich has always been his skating, which is something that he needed to improve on in order to stick in the NHL.

“I’ve been working with power skating coaches, and obviously a ton in the gym over the past several years trying to improve in that area. I had a 10-month-long offseason… and I kept working at that. I definitely feel faster this year. I feel like I’m first to pucks more. I feel like I’m able to be involved in the play, because I have gained half a step.”

Comets head coach Trent Cull said earlier this season that Gadjovich had picked up a half-step.

“He’s always had good details,” Cull said of Gadjovich, as quoted in the Utica Observer-Dispatch. “He’s good on the forecheck. He’s had great stick on puck. He’s a physical guy… He’s a guy that likes to go to the net-front. He likes to get those greasy goals.”

This isn’t the first time Gadjovich has had to sit in quarantine this season. Before COVID-19 rocked the Canucks, it hit the Comets, and Gadjovich did get sick.

Utica didn’t play a game for a month after the outbreak, which made things more difficult on a player like Gadjovich.

“It took a long time for me to start feeling back to normal again… My body was achy and sore for a few weeks after, but I’m starting to feel more like myself.”

“I just find myself sweating and my heart rate racing”

When you’re on a roll, playing the best hockey of your career, the last thing you want to do is to be away from the rink.

“I’ve been doing some really good workouts, and I feel good about that, because I was kind of nervous. It’s tough sitting in a hotel for a week. You’re kind of worried about what type of shape you’ll be in afterwards.”

Gadjovich said Canucks trainers sent him a gym bag filled with exercise equipment, bands, and protein, and that he’s been eating healthy and doing workouts while he waits to join the team.

When he’s not working out, he’s watching hockey, which includes seeing some ex-Comets teammates making their NHL debuts, like Kole Lind and Jack Rathbone. Both of those players have impressed with the Canucks, and Gadjovich is eager to prove that he can too.

“It’s tough, I’m watching Vancouver play and they show the Jets games on here, so I’ve always got hockey on and I just find myself sweating and my heart rate racing.

“I’m just thinking about getting into the lineup and actually playing. Having to sit here and do nothing for a week doesn’t make that easy, that’s for sure.”