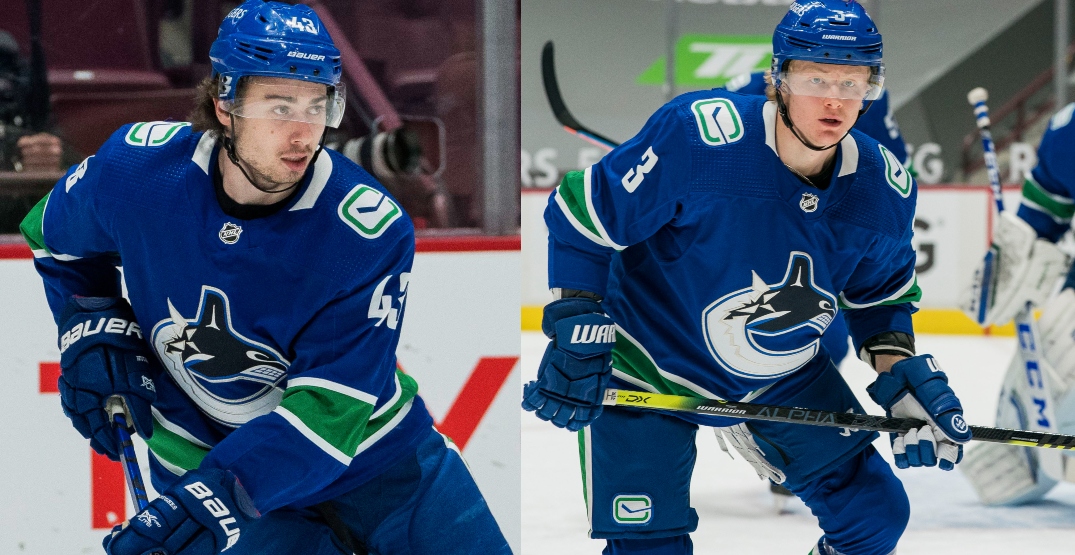 The pandemic has been hard on all of us, but it’s especially difficult for people that live alone.

That included Vancouver Canucks defenceman Quinn Hughes, who had plenty of camaraderie at the rink but nobody else at home, until recently.

Rookie defenceman Jack Rathbone has moved into Hughes’ apartment, as the pair have been roommates since Rathbone’s call up from Utica. This isn’t your typical mentorship role for a rookie in a new city, as Hughes and Rathbone are the same age (21) and have known each other for years moving up the ranks in the United States. They were also roommates at Canucks development camp in the past.

“I’ve known him for a while now,” said Hughes. “He’s a good kid, all the guys like him, so for me to take him in, it was easy and more fun for me.”

“I was just alone during the whole COVID thing, by myself for 12 days… We’re not doing much, we’re not going to restaurants or anything like that, so just to have another guy in the apartment is nice.”

Rathbone had a rather uneventful NHL debut, but that’s not a bad thing for a young defenceman. He played just 12:04 on Tuesday, registering one shot on goal, and wasn’t on for a goal against in a 4-1 loss to the Oilers. He also had a respectable 53.57 Corsi-for percentage in the game, albeit in sheltered minutes keeping him away from the likes of Connor McDavid and Leon Draisaitl for the most part.

He showed head coach Travis Green enough to get into the lineup again tonight in Edmonton though.

It will be interesting to see if Rathbone can supplant another rookie defenceman, Olli Juolevi, who sat out last game. Both players play the left side, so there may not be enough room for both of them in the team’s top six next season.

With the playoffs no longer a realistic goal, the final nine games will be a chance to audition for a spot on the team going forward for players like Rathbone, Juolevi, and others.