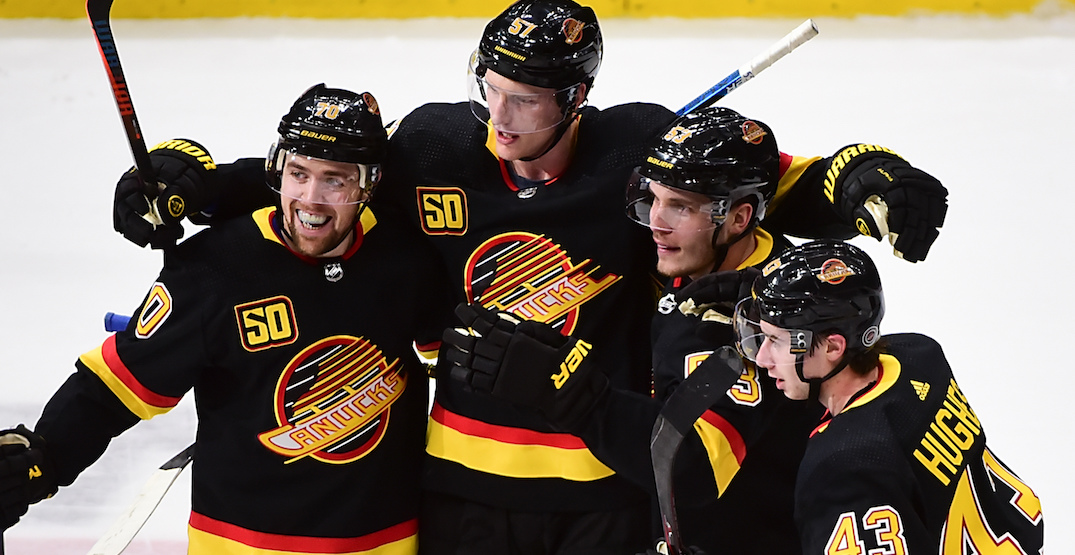 In the midst of a dreadful losing streak, the Vancouver Canucks delivered some delightful news about the impending relocation of the team’s AHL affiliate.

The Canucks announced on Tuesday that they’re intending to bring their AHL team to Abbotsford for the 2021-22 season.

The news inspired fans on social media to drop a barrage of name suggestions. Some were good, some were…a little out there.

Since the announcement stated that the team will have a new name, Comets is out of the running. With that stipulation out of the way, here are the nine best name ideas for the rebrand of the Canucks’ AHL affiliate in Abbotsford.

This is the least creative of the bunch… but you can foresee the Canucks going down this road.

Currently, there are six AHL teams that have the same names as their NHL affiliate

It’s not inconceivable that the Canucks AHL affiliate follows a similar trajectory.

It makes a ton of sense to tie the new team name into Abbotsford’s aviation history.

Since 1962, the city has hosted the Abbotsford International Airshow. It is the largest airshow in Canada, and it was designated as the country’s national airshow by former Prime Minister Pierre Trudeau.

Don’t expect to see the team named “Pilots,” since the city already has a junior B hockey team with the same name.

Instead, the name Aviators seems like a perfect fit. That’s especially true after this template was shared online.

If they went Aviators, we could finally see a concept like this arrive. https://t.co/7rmSrMCJI6 pic.twitter.com/PJYILymNhR

In the 2010s, we saw a revival of the Vancouver Millionaires brand, with the Canucks sporting the burgundy gear on a few occasions.

Aside from Eddie Lack’s questionably stained pads, this was one of the more notable moments that occurred in those jerseys.

This isn’t the most original idea on the list, but it was well-received in Vancouver at the time, and the likely would be the same if the brand were to arrive in Utica.

Stemming from the Greek word for air, the Aeros would be another creative name that ties in with the city’s history of aviation.

The Houston Aeros were the most prominent team to use the name during the old days of the World Hockey Association. Most famously, this was where Gordie Howe played with his sons Marty and Mark.

In case the Canucks want to remain in the same stratosphere as the name “Comets,” they could keep the outer space theme by choosing the name “Astros.”

The term Astro is broadly defined as “relating to the stars, celestial objects, or outer space.” It’s short, slick, and as you can tell from this list, alliteration names are always catchy.

Asteroids could be another option, but it’s a bit of a longer, clunkier name. Astros is the better space-themed option.

The last alliteration-themed name on the list, the name Aces has been used in hockey circles before. The Anchorage Aces (later known as the Alaska Aces) used the name for the ECHL team from 1998 until they relocated in 2017.

There’s also an aviation-themed definition for the word as well. According to Merriam-Webster, the word ace refers to “a combat pilot who has brought down at least five enemy airplanes.”

For years, Canucks fans have been clamouring for the Johnny Canuck character to be integrated into the uniform.

Well, this could be the opportunity.

While Lumberjacks is a bit of a cheesy name, it would allow the organization to pay homage to the mythical Johnny Canuck character that has been a part of the team’s folklore for a number of years.

Abbotsford, British Columbia’s largest city geographically, is a haven for agriculture and farmland.

While many farm-related names are a little silly for a sports club, going with something like Stallions could be a powerful and unique way to highlight the agricultural nature of the city.

Other strong horse-related names include the Colts or the Mustangs.

For those who want Abbotsford’s AHL team to tie in a fun, unique name with the city’s aviation history, Barnstormers might be the choice.

The term barnstorming refers to pilots who performed airplane stunts for tricks back in the early 20th century.