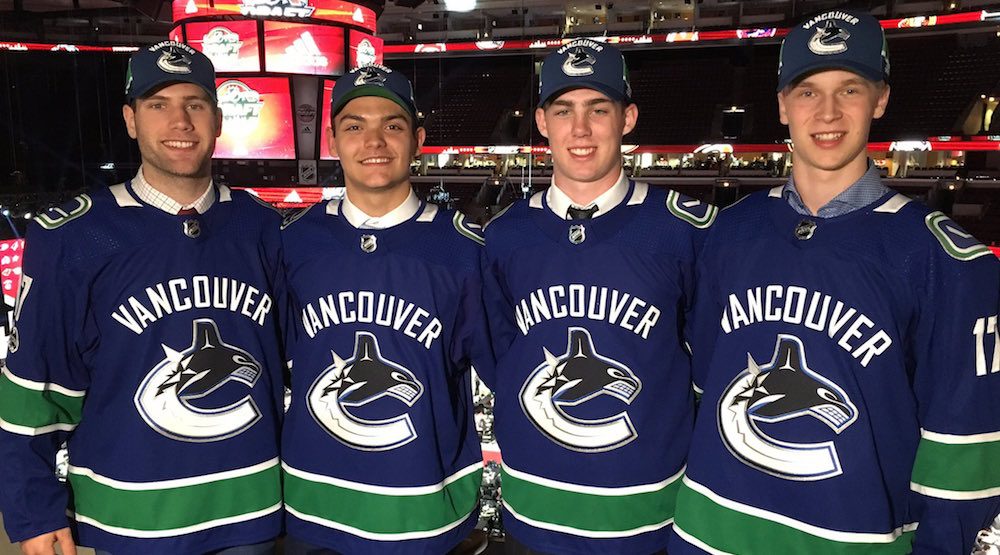 It was an eventful day for the Vancouver Canucks on Day 2 of the NHL Draft.

The Canucks, who entered Saturday with six remaining picks – to go along with their first rounder Elias Pettersson who was selected on Friday – were able to add another in a trade.

The Canucks dealt the fourth round pick (112th overall) to Chicago in exchange for a fifth (135th pick) and a sixth round selection (181st overall).

It was a good day for the Canucks, who made more picks than they have in years.

“When you can address some skill and scoring, we’re always looking to do it,” said Judd Brackett, director of amateur scouting.

Mission accomplished by the looks of it, as the Canucks added four players in the first 64 picks of the draft. The four forwards, three defencemen, and one goalie picked over two days in Chicago have to make Canucks fans feel better about the future of the franchise.

“I feel like we addressed some needs. It was nice to have early picks in the second round, and multiples too.”

Here’s who they picked up:

The Canucks made their first pick early in the second round, selecting Kole Lind, a big point producer with the Kelowna Rockets last season. The 33rd overall pick, Lind narrowly missed getting picked in the first round on Friday.

“Yesterday was a really long day. It was kind of a disappointment,” Lind said. “But joining the Canucks today was really exciting for me. There’s not really words to describe the feeling I have right now.”

The Saskatchewan product, who says he models his game after Filip Forsberg, scored 87 points (30-57-87) in 70 games in the WHL. He was named to the WHL Western Conference Second All-Star Team.

It’s ironic that the Canucks used the 55th overall pick – the one they got from Columbus for John Tortorella – on Jonah Gadjovich. After all, Gadjovich surely would have been a Torts favourite.

When asked to describe his game, who he patterns after David Backes, Gadjovich didn’t hesitate.

“I’m a power forward,” he said. “I love being in the corners, I’m heavy on pucks, and I make a living in front of the net.”

The 6-foot-1, 199-pound forward scored 46 goals for Owen Sound last season, third most in the OHL.

No, this doesn’t mean that Thatcher Demko is on the way out. DiPietro, the fourth-ranked North American goalie by NHL Central Scouting, should be able to make the jump to the AHL right around the same time that Demko graduates to the NHL.

“It feels amazing,” DiPietro said, describing the feeling of being drafted. “I’m very happy to be picked by an organization like Vancouver. Very honoured. I just can’t wait to get started.”

The knock on DiPietro is his size, which he will need to overcome like Jonathan Quick – who he mentioned as someone he plays like – has done.

The Canucks used their fourth round pick on Jack Rathbone, a puck-moving defenceman who played high school hockey last season. He’s committed to high school hockey next year too, sacrificing an opportunity to play in the USHL with better players, because he wants to help out with his eight-year-old autistic brother.

The smooth skating, puck-moving defenceman – who models his game after Kris Letang – will head to Harvard University in 2018-19.

With Dexter School, Rathbone led his team in assists (19) and points (35) in 22 games. He was named to the United States High School All-USA Hockey First Team, and appeared in four games for Youngstown of the USHL.

With the 135th pick in the #NHLDraft, the #Canucks are proud to select defenceman Kristoffer Gunnarsson. pic.twitter.com/xFl8OcKILx

Perhaps the most curious move of the day, the Canucks used their fifth round pick on an over-age player, taking defenceman Kristoffer Gunnarsson. Gunnarsson turned 20 years old in February, making him a full two years older than many of the other players in the draft.

A big, physical defenceman, he can be described as a stay-at-home type of rearguard. He split the 2016-17 season with Oskarshamn IK (Sweden, second division) and Frolunda HC (Sweden, first division). He notched just two points in 39 games combined with both teams.

Gunnarsson was also a member of Team Sweden at the World Juniors.

Petrus Palmu is a Finnish winger who the #Canucks selected at 181 in the #NHLDraft! pic.twitter.com/NP5HY9sgAD

You can’t analyze Petrus Palmu without mentioning his size. At just 5-foot-7, he’s small. In fact, he was the shortest player drafted in Chicago.

As you might imagine, he makes up for it by being speedy, smart, and offensively gifted. As a 19-year-old, he scored 98 points (40-58-98) for Owen Sound in 62 games. That put him in fourth place in OHL scoring last season.

Palmu has scored at every level. Can he translate it to the NHL? If he does, the Canucks could have the next Martin St Louis. If he doesn’t, they may have the next Steve Kariya.

Matt Brassard at 188 was the final selection the #Canucks had in the 2017 #NHLDraft. pic.twitter.com/L9eSWHAwbe

For their last pick of the draft, the Canucks turned to a big, offensive defenceman from the OHL. Matthew Brassard has good size at 6-foot-2, 197 pounds, and scored at an impressive rate for a blueliner.

The Barrie, Ontario product scored 32 points in 62 games, and ranked sixth among defencemen in the OHL in shots per game (3.27).