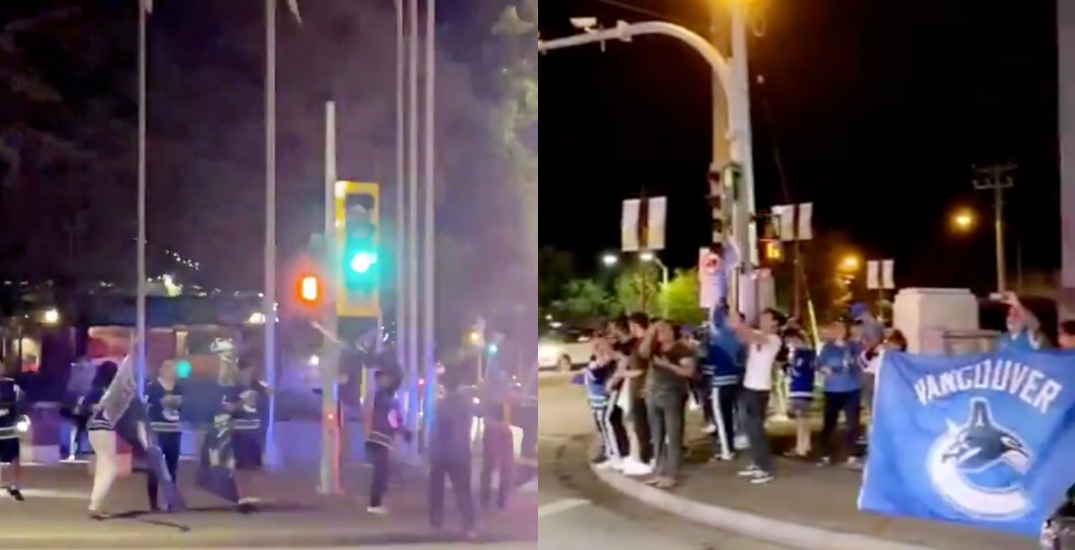 We’ve got a hashtag and the Canucks have momentum, as excitable fans continue to celebrate big wins on Scott Road during the playoffs.

A tradition that dates back many years, fans in Surrey and Delta are showing up in increasing numbers to the corner of Scott Road and 72 Avenue. Fans standing on the street corner have been spotted cheering, waving flags, and even playing musical instruments, while many Canucks fans driving by in cars salute the team by honking their horns.

There was even a celebrity sighting after Game 5, as Jazzy B showed up.

Fans are uploading videos to social media, with the hashtag #ScottRoadCellies picking up steam. The hashtag was started by Sportsnet 650’s Randip Janda, and the all-sports station even had one of their hosts, Bik Nizzar, on the scene after the game.

Surrey RCMP estimates that 750 people celebrated the win at the popular street corner on Wednesday night, which of course is concerning to a degree due to the pandemic. Working together with Delta Police, as the street corner borders both municipalities, there has been a police presence in the area as they monitor the celebrations.

“For the most part the crowd has been pretty good, festive… it hasn’t been a very disruptive crowd.”

Safety is a concern, but Surrey RCMP also recognizes the tradition of celebrating Canucks wins in the area — even if fans haven’t had much to cheer about for most of the last decade. But they are also not encouraging more people to attend.

Fans should of course make sure they’re remaining physically distant from others, even when outside, and Surrey RCMP recommends that everyone attending considers wearing a mask, especially when physical distancing isn’t possible.

“Get a sweet Canucks mask even,” the spokesperson suggested (they do sell them, by the way).

Here’s a look at how Canucks fans celebrated Wednesday’s big win, which pushes the defending Stanley Cup champion St. Louis Blues to the brink of elimination.

The lineup of cars ready to do their lap 😂💙💚 pic.twitter.com/wvo8G1wSrn

Feels like the celebrations here at #ScottRoadCellies are gonna be unlimited!

Man its gonna be live on Friday if we win👀🔥 #scottroadcellies pic.twitter.com/6buQB0iWy9