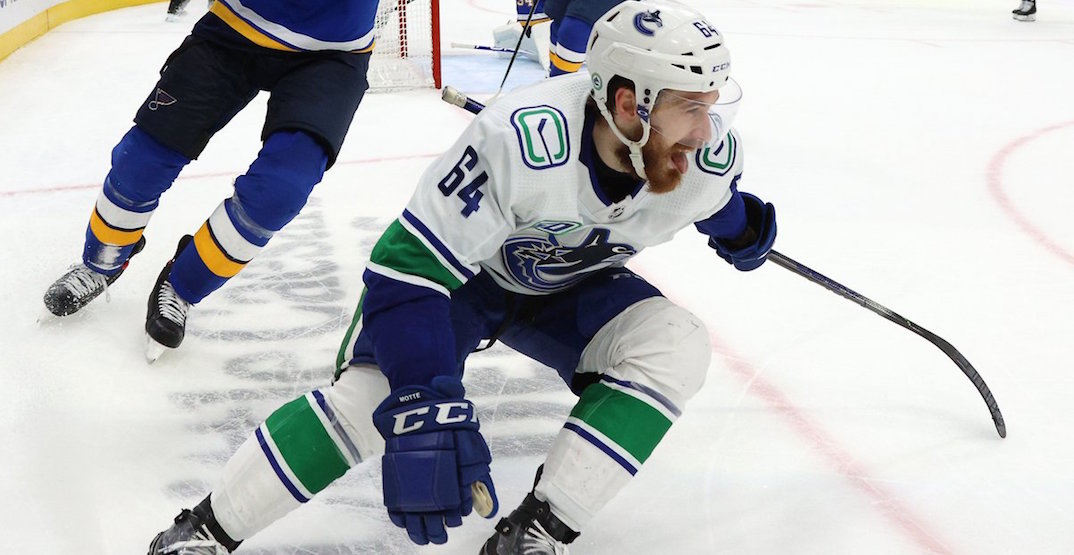 The Vancouver Canucks are one game away from eliminating the defending Stanley Cup champions.

Tyler Motte was the unlikely hero in Game 5, scoring two goals — including the game-winner in a 4-3 win — to give the Canucks a 3-2 series lead.

Motte scored the game winner at the end of the second period with the game tied 3-3. He picked up a loose puck in the neutral zone and sped in on a partial breakaway before snapping a shot past Jake Allen.

“It’s always nice to contribute offensively, especially this time of year,” said Motte after the game. “Goals are tough to come by, so it helped take some pressure off our top guys.”

“I was happy for [Motte],” said Travis Green. “He does a lot of little things for our team. At this time of year you need guys to step up, he did it tonight and played a hell of a game.”

The opening goal of tonight's game was a shorthanded beauty by @tmotte_14 – his first career playoff goal! 🎉 pic.twitter.com/bVhyEfcCKH

It’s the fourth time the Canucks have scored the first goal of the game in this series.

The lead was short-lived though. Brayden Schenn scored 2:26 after the Motte goal to tie the game, and the Blues later took the lead when Ryan O’Reilly centred a puck that went off Jacob Markstrom’s skate and in.

The Canucks came out flat to start the second period and things got dicey when Zach Sanford scored 5:51 into the period to give the Blues a 3-1 lead.

Green had juggled his lines prior to the start of Game 5, and the shuffling continued throughout the first half of the game. Eventually, Green settled on playing Jake Virtanen on the top line with Elias Pettersson and JT Miller.

The trio has had some success in the regular season and they clicked immediately in this game.

Virtanen in on the forecheck gets the puck to Miller who jams it home under Allen. #Canucks #STLBlues pic.twitter.com/QfpyJgGWlB

Virtanen won a board battle and was able to get the puck to Miller, who jammed in his third goal in as many games to get the Canucks within a goal. It was the first playoff point of Virtanen’s career.

Virtanen got his first career playoff goal just over four minutes later, fooling Allen with a short side shot that tied the game.

The comeback wouldn’t have been possible without some exceptional saves by Markstrom, including this diving blocker save after the puck took a weird bounce off the referee.

“I feel like that save Marky made [that bounced] off the ref kind of was a turning point.” Miller said after the game. “That could’ve been 4-1 right there, [then] it’s a way different scenario in the game.”

Markstrom made 36 saves, including 18 in the second period to keep the Canucks in the game.

The Canucks got a scare at the end of the game when the Blues celebrated a last second goal, but a review determined it was well after time expired, and it may not have even fully crossed the line anyways.

Despite the win, there was some bad news from the game when Alex Edler took a skate to the head. The Canucks defenceman was cut on the play and left the game in the second period. With Tyler Myers already out, losing Edler would be a massive blow to the Canucks defence.

The Blues looked poised to cruise to their third straight victory when leading 3-1 in the second period, but the Canucks got good goaltending, managed to get some gritty goals and then protected their one-goal lead. They have earned every inch they’ve gotten in this series, and they just have a little bit further to go to take down the reigning champs.

The Canucks have a 3-2 edge in the series and can eliminate the Blues on Friday in Game 6. The start time is yet to be announced.