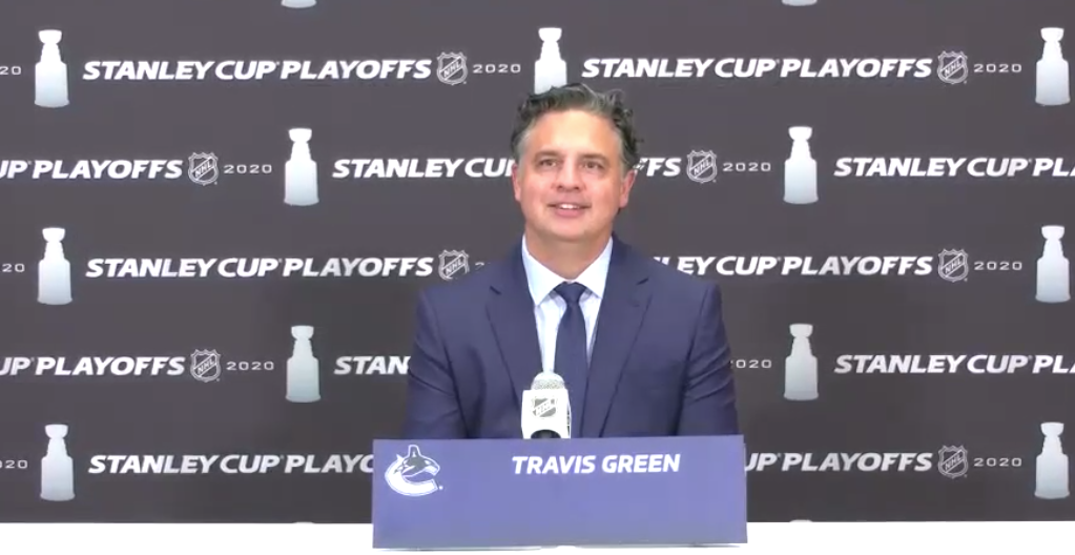 After his hockey playing career came to an end in 2008, Green became a semi-regular on the high stakes poker tournament scene, winning a total of $385,543.

Prior to Game 5 against the St. Louis Blues, Green put all those poker skills to use.

Unlike normal times, in the NHL bubble independent media aren’t allowed to view practices. That has allowed the card shark coach not to show his cards until the pre-game warmup, as the team hasn’t made public the lines used in practices, and they’re not planning on doing it anytime soon. Green even went so far as to remove the numbers from players’ jerseys in warmup to really keep his lineup incognito.

It’s during the warmup that we usually find out how teams will line up, except not on Wednesday.

Showing a poker face appropriate for high-stakes tables in Las Vegas, Green kept his bluff going 30 minutes longer than usual. The line rushes used in warmup were the same as he’d used the previous game, with Adam Gaudette appearing to skate as the extra forward.

Green fooled everyone, including the team’s own social media account, which tweeted out the projected lineup minutes before the game.

LINE IT UP #CANUCKS! 💪 pic.twitter.com/oGbMarAhVf

Some fans might have been getting Willie Desjardins flashbacks.

But when the game started, the Canucks lines looked nothing like they did in warmup, with Bo Horvat and Elias Pettersson swapping spots, Jake Virtanen and Loui Eriksson trading places, and Gaudette in the lineup for Zack MacEwen — though there was even line juggling within those changes in the first period. There were even changes made on defence, with Jordie Benn switching spots with Troy Stecher.

Still trying to get a sense of the #Canucks forward lines, since it looks like Miller-Horvat-Boeser is a thing.

The changes were unconventional and against the grain from how Green usually operates. But after two straight loses, with the Blues appearing to have the Canucks figured out, the Canucks coach needed to give St. Louis a different look.

And you know what? It worked.

The Canucks came out with great energy and looked like the better team for most of the first period.

Blues coach Craig Berube was faced with the decision to play Ryan O’Reilly against Pettersson or a Horvat’s loaded line with J.T. Miller and Brock Boeser.

In the second period, Green juggled his lines again, putting Virtanen with Miller and Pettersson. The move paid off, with Miller scoring a greasy goal to cut the Blues’ lead in half and Shotgun Jake scoring his first-career playoff goal to tie the game.

“We had it in the back of our mind, just over the last day just sort of thinking about different combos,” Green said after the game. “We wanted to switch it up a little bit tonight. We just shook it up partway through the game there. Switched everything up a little bit. Happy for [Virtanen], happy for our group.”

Asked why he didn’t show his lines during warmup, Green cracked a smile and said: “yeah, we just didn’t show our lines today.”

Travis Green on what #Canucks did effectively on O'Reilly's line tonight: “Probably not going to give you my real ideas or thoughts.”

In the third period, Green went back with more familiar lines to protect a one-goal lead, which they did so successfully, limiting the Blues to nine shots and holding on for the 4-3 win.

The game wasn’t a Picasso — Jacob Markstrom made several outstanding saves in the second period to stop the game from being a blowout — but in terms of Green giving his team a different look and juggling his lines, it was a masterpiece.