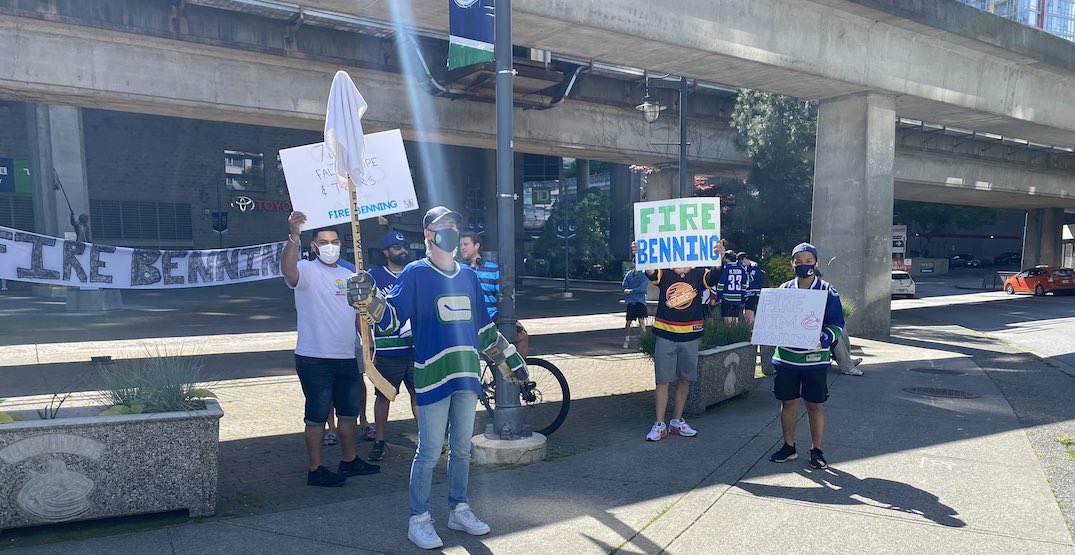 A small group of fans protesting Canucks management showed up at Rogers Arena today, while a banner protesting ownership flew from the sky.

With a large banner that read “Fire Benning,” fans were spotted chanting in protest outside the home arena of the Canucks. For the second time in two months, fans were responsible for flying a banner from a plane, this time reading “#AquiliniOut.”

Another “Banner Day” for the #Canucks Ownership and Management pic.twitter.com/mRsKTbJgYp

The protest comes after the Canucks finished the season in last place in the North Division, missing the playoffs for the fifth time in six seasons.

On Friday, Aquilini acknowledged that the team needed to “repay your loyalty” in a letter to fans.

“The future is bright,” he said. “I know I’ve been saying that for a while now, but progress doesn’t always follow a straight line. Believe me. I’m as impatient as you are to see the Canucks return to top-tier status. Yes, it’s been a long time.

“But the darkest hour is just before dawn.”

The Canucks owner is backing Benning, who has been the team’s general manager since 2014. The team has also decided to bring back head coach Travis Green, who has signed a two-year contract extension.

Benning has promised to be “aggressive” on the trade front and free agency this summer, and will look at using a buyout to clear cap space.