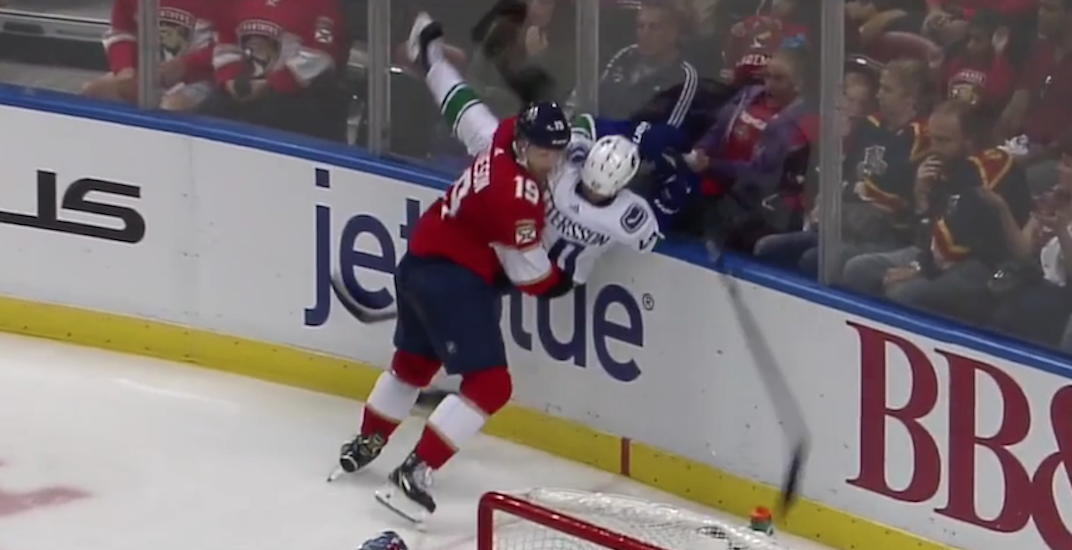 Two days after Mike Matheson body-slammed Elias Pettersson to the ice, leaving him with a concussion, it’s still the only thing Canucks fans are talking about.

The basic point of contention: the Canucks should’ve had a response. They should’ve sent a message. And though most Canucks fans appear to be united on the issue, there are plenty of voices on the other side.

We’ve heard arguments of why the Canucks didn’t respond Matheson’s hit on Pettersson.

Here are some others:

The idea of a suspension or fine for Matheson is nuts. Is a Dman supposed to tailor his physicality to the weight or strength of opposing players? This is crazy!

Brad May on the Pettersson hit: The people in Vancouver are out of their minds thinking this was an egregious hit. I may be a dinosaur and completely in the wrong but, I don't even see it been a penalty. We do need to protect the stars but this is a good lesson for the rookie.

I’m with you, but I’m also okay with what Matheson did on that play.

Journalists, former players – many got in on it. Point is they weren’t alone in their thinking.

2. The fans would’ve fought him

Those who don’t entirely agree with the idea that the Canucks should’ve done something appear to be confused by the attitude of the retributionists.

It’s simple really: “We are all Canucks” is not just a slogan, fans in Vancouver really do identify with their team. That spark has been reborn with the coming of Brock Boeser and even more, Pettersson.

Pettersson’s not only the future of the team, but the most important player now as well.

If those fans were on the ice playing alongside Pettersson, their reaction to Matheson’s hit would’ve been swift and clear – they’d have gone straight to the offender, they’d have got in his face, and he would’ve quickly realized he’d crossed a line.

Seeing at the reaction of the fans online and calling into the local radio stations since, I honestly believe most of them would have jumped through their TVs and onto the ice to exact revenge themselves, with no thought given to size difference or anything else, if it were possible.

That’s all they wanted to see – a response from the team that represents them.

They were sold a strong team identity – one that sticks up for each other, especially its young stars. They didn’t see that so they were upset and embarrassed for their team.

Thinking of it this way, I don’t blame them.

Don’t know what this guy is thinking, if he’s thinking at all:

Leafs-free radio continues on the EFShow on @Sportsnet960 with a chance to win two tix to Thursday’s Pizza Pigout. Name the finishing move Matheson used on Patterson and best ones get tix. Send me the answer on Twitter. Creativity counts

Having fun with an incident that left a 19-year-old out with a brain injury? That’s pretty insensitive stuff from Eric Francis, who is now with Sportsnet after years writing for the Calgary Sun, and should know better.

Unsurprisingly, the responses were not people jumping at the chance to “name the finishing move.” 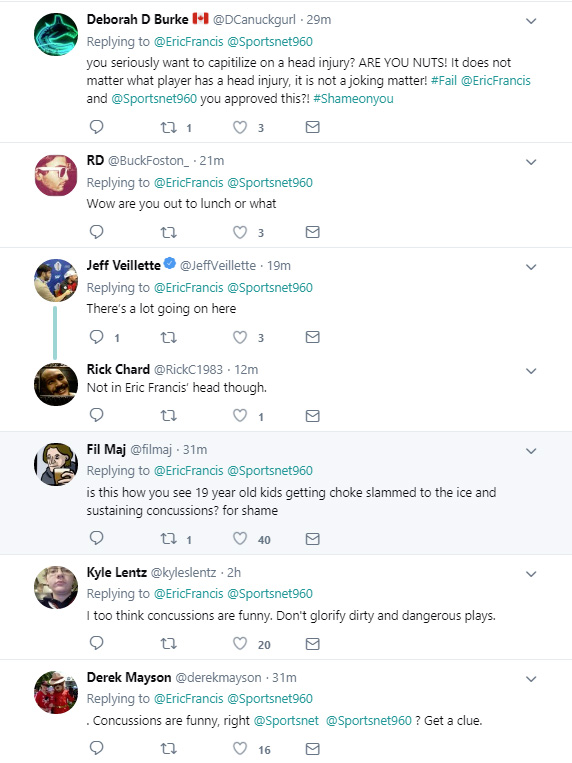 That’s just seven of hundreds of responses like them, by the way.

The best one probably came from former NHLer Daniel Carcillo:

While Green’s response after the game left some fans a bit upset – he talked about needing to be disciplined and winning the game – he had more to say Monday after a few days of reflection:

“I’m really upset. I still am,” Green told reporters. “We lost a bright young player to an injury and I don’t think that was necessary. I’m pissed off right now still talking about it, but composure is part of coaching and it’s part of playing.

“I’m as mad as fans about this with what happened.”

Switching gears now – last week Mike Gillis spoke publicly about his time with the Canucks for the first time since he was let go in 2014.

Listening to him and Laurence Gilman speak – we heard Gilman regularly with Sekeres and Price last year – it’s clear they are great leaders.

That they’re strong and not afraid to make big decisions is a given, but more importantly, you get an understanding of their thought process – the way they use all empirical evidence they can come up with to to come to conclusions, the way they constantly evaluate and re-evaluate, the way they are always trying to find another competitive advantage.

They’re leaders who empower everyone in their organizations to maximize their potential.

Does listening to Francesco Aquilini and Jim Benning give interviews inspire that same sense of confidence in you?

I’ll leave that to you to answer.

The key to me is everyone makes mistakes – in life, in their jobs, in leadership positions – and the ones who are the most successful are those who actively seek to learn from those mistakes, who make themselves better because of them.

We saw the Gillis regime do this when they made Roberto Luongo captain, then realize a couple years into the experiment that it wasn’t working. They changed course and gave Henrik Sedin the C and never looked back.

They did it with their scouting system too, albeit far too late (Gillis admitted this and owned it during the interview), eventually putting Eric Crawford in the head scout’s chair.

This past week, we’ve heard Gillis say he realized he’d made a mistake hiring John Tortorella early on, and some reports he would’ve ended that relationships mere months into it if he had his way.

Have we seen that ability to learn from the current regime?

Re-signing Erik Gudbranson to a bigger contract after paying a high price to acquire him in a trade initially, signing three more free agents to long term deals this summer after signing Loui Eriksson a couple years ago… no, we probably haven’t.

That’s what I got out of last week’s interviews anyway.

Thought radio had to have peaked after both Gillis and Aquilini were on last week? Trevor Linden, the Canucks former president, spoke with Sportsnet 650 Monday morning.

And although the questions had to be pre-approved, he did provide the following food for thought:

Linden on how he left the team, "I think I left it in a better place than I found it in. The other thing I am proud of is
the impact I had on the organization and the people I worked with and the feedback I got from them." #Canucks

The question: did Linden leave the Canucks in a better spot than he found them?

Look, the team now has Brock Boeser and Elias Pettersson so it’s hard to make any argument that the team would be better off without these two future superstars.

Now, it’s hard to say if the team is better off now than it was then, but think about this: aside from the “untradeables” the team Linden inherited had many more players than the current team who would be desirable to other teams.

We know how many of those assets were squandered, and we know that the current team really doesn’t have many trade chips.

All I’m saying is if Vancouver didn’t have Pettersson, his statement would be pretty easy to shoot down.