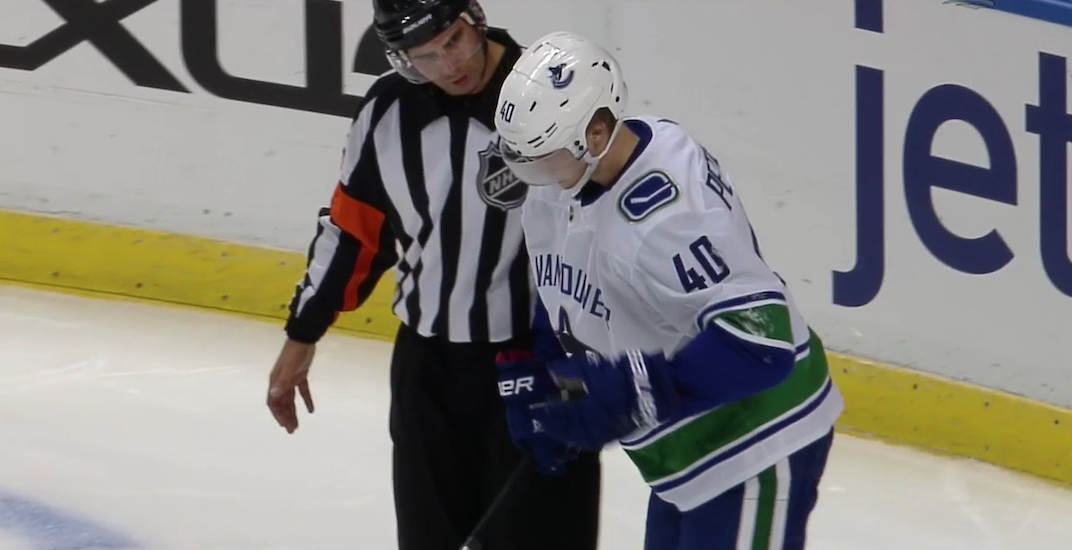 Elias Pettersson boarded a flight to Pittsburgh with his Canucks teammates on Sunday, as they prepare for their next game against the Penguins on Tuesday.

We don’t know if Pettersson will be in the lineup, although it would seem unlikely given how he exited Saturday’s game in Florida. Pinned to the boards before being body slammed to the ice by Panthers defenceman Mike Matheson, Pettersson left the game with an apparent head injury.

Canucks players couldn’t have been happy seeing their leading scorer woozy and headed straight for the dressing room. Travis Green called it a “dirty play.”

And yet… They did nothing.

There was 15:03 left in the third period when Matheson injured Vancouver’s best player, who also happens to be a 19-year-old rookie.

They needed to do something.

Fans on social media are out for blood. It’s 2018 but a significant amount of people sound like they want 1970s-style vigilante justice.

It’s hard to argue against it.

Look, the Todd Bertuzzi incident is still fresh in the minds of fans in Vancouver, and nobody is asking for something like that. But in a physical sport like hockey, teams need to stick up for each other – particularly when their most vulnerable player has been taken out of the game with a cheap shot.

That may sound too Don Cherry-esq for some of you, but it’s reality in the National Hockey League. Reputation matters. Camaraderie matters.

Matheson will have a hearing with the NHL Department of Player Safety on Monday, and he may receive a suspension. But whether he does or doesn’t is immaterial to the Canucks.

Elias Pettersson of the @Canucks became the sixth player since 1997-98 to record at least eight points through his first five career NHL games. #NHLStats pic.twitter.com/MI06YRdEgR

The incident happened in a 2-2 game and Bo Horvat scored the winning goal not long after, so chasing Matheson or taking a bad penalty would not have been advisable. But there were opportunities to do something.

So it’s not just Erik Gudbranson or Antoine Roussel that we should point the finger at.

Someone – anyone – needed to at least shove Matheson. Get in his face after a whistle. Say something mean to him.

Their best chance came with 6:35 left in the third period. On a delayed offside, Matheson chased the puck behind the Canucks’ net and actually made a play on goaltender Anders Nilsson after the whistle.

The Canucks’ No. 1 line and top defence pair was on the ice, but it was still a perfect opportunity to step in after the whistle.

Something more than nothing would have been a better response.

When Gudbranson took a liberty with Calgary’s Dillon Dube – a 20-year-old rookie on his first shift in the NHL – the Flames responded. Unfortunately for them, Travis Hamonic bit off more than he could chew with the 6-foot-5, 217-pound Canucks defenceman and suffered a facial fracture.

That probably wasn’t worth it for the Flames, but at least they can hold their heads high.

“When a teammate does that for you it shows that we’re a tight group,” Dube said of Hamonic sticking up for him. “When [Hamonic] does that four a young guy like me it shows how much of a leader he is and the leaders we have on our team. It’s pretty incredible.”

“We think the world of [Hamonic] in this room,” added Matthew Tkachuk.

Hockey players say dumb things all the time, but in this case, they’re onto something. Even in getting his butt kicked, Hamonic brought his Flames teammates closer together.

And the thing about the Panthers is, they’re not even a very tough team.

They didn’t need to throw away two points to have an answer.

All they needed to do was something, anything, to make Matheson a little more uncomfortable for the rest of the third period.