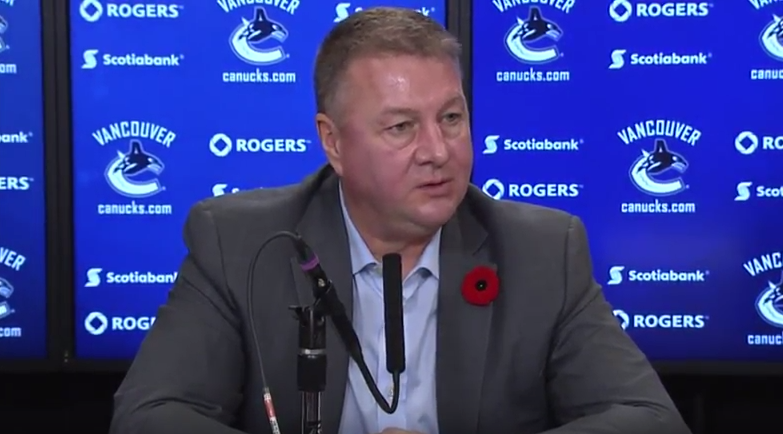 Upon being let go, NHL executives often try to stay in the game. Some find jobs in the media, others jump right back in when another team comes calling.

Mike Gillis did neither. He went dark.

It was known, of course, that he was teaching at the University of Victoria. Still, he didn’t speak to anyone, not publicly at least, about his time with the Canucks.

On Wednesday that changed. Gillis appeared on TSN 1040 with Matt Sekeres and Blake Price and he spoke for the first time about his six-year reign as general manager from 2008 to 2014 in a two-hour long interview.

Despite being the most successful period in team history, it may have also been the most tumultuous. Listening to Gillis, it clearly left some scars.

The most emotionally revealing portion of Gillis’ interview came when he spoke about the 2011 run to the Stanley Cup Final.

“We went through that first series where we thought we were going to win that series in four, we were going to have time to rest, we’re going to do this, and suddenly we’re in Game 7 in overtime. It was incredibly stressful.”

“Being in the finals, the pressure that brings and the pull on everybody – the amount everyone wants out of you and your team. Trying to protect them was draining.

“We lost the series, stuff happens and to have what happened in this city which was our adopted home afterward, I couldn’t believe it. It’s a hockey game and it’s a hockey team. We had done our best under the circumstances given and for people to take advantage of that and hurt one another and try to destroy businesses using that as an excuse was just one of the worst things I’ve ever seen.”

Gillis addressed how he felt the media treated the team during that run too.

“The Canadian media pressure in itself was almost unbearable. And trying to manage all these guys that came from other cities in Canada that did not want us to win. It was quite clear that they had agendas. I didn’t deal with it properly. I don’t think our staff dealt with it properly. I was the leader and if I’m not dealing with it properly then the trickle down effect does occur.”

“We did take things personally and that shouldn’t have happened.”

Seven years after that memorable time, Gillis has clearly taken the time to reflect and learn from the mistakes he and his team made. Still, introspection is a side of him we didn’t hear very often when he was GM.

Later in the interview he continued on the effect of the media, again owning his actions.

“I should’ve ignored it and not even concerned myself with it.”

The year of Torts

The other most memorable portion of the Gillis era, for fans, was probably the tumultuous year John Tortorella was head coach.

Although he was holding back, the former GM dropped some bombs during this portion of the interview.

“We all felt the team needed a different viewpoint but it became apparent to me early on that this (Tortorella as head coach) wasn’t going to work, and as I made those feelings clearer and I made them clearer on this station – I said later on that I didn’t like the direction of the team and where we were headed – I knew I was becoming part of the problem and not the solution by doing that.

“The solution is to find your way out of it and do your best, but I didn’t see a way we could emerge from this intact. I was watching a lot of the things we had done that gave us a competitive advantage go out the window, and I made my position clear. And in professional sports, 90 per cent of the time, as Laurence likes to say, you get rid of your problem. I was the problem and I deserved to go because I disagreed with certain things.”

“It makes good television I guess, but when your head coach gets suspended for 15 games, you’re done, it’s over.”

Gillis also spoke about the infamous Murphy bed we heard so much about during the Torts’ year.

“We built a Murphy bed because he said he likes to be at the rink the whole day and I don’t recall it being used ever, except maybe Ryan Kesler going in there to have a nap.

“Anyway, I just don’t think John was fully invested in the team and where we were going and what we were doing and the player personnel we had.”

The Luongo trade and months following

Another unforgettable storyline from the Gillis years was the Luongo saga.

From being named captain of the team, to being supplanted as the starter, to saying his contract “sucks,” to his eventual trade to Florida, fans still remember the roller coaster of emotions and have open wounds.

Gillis addressed those too when he was asked if Tortorella’s benching of Luongo in the Heritage Classic led to the trade.

“Roberto and I had a really good relationship and we were completely honest with each other in everything that happened with his tenure and my tenure here, and it was clear he could not remain after that.”

In the years after his firing, Gillis would be oft blamed for the state the team ended up in, particularly with respect to the no trade clauses.

He was asked if the number of contracts with no-trade clauses inhibited the Canucks’ ability to rebuild.

“No,” he responded. “Because I wasn’t there so I wasn’t doing it. My background as a player agent may have led to a different conclusion. It’s really hard for me to say that those things could’ve been done differently or handled differently, but I know that if Laurence (Gilman) and I were doing it, we would’ve tried to do it in a way that would’ve expanded the horizon for the Canucks.”

Considering the way Gillis and Gilman handled contracts during their tenure, their ability to find and create value through trades, and their handling of the salary cap, it’s interesting to think of how differently the team may have fared had they been given that chance.

He also spoke about how he would’ve recaptured the draft picks the Canucks had traded away to help win them the Cup.

“We had a plan for that,” said Gillis. “We had really strong players who were highly desirable. We had some trades on the table at the deadline before I got fired that would’ve changed the landscape of the team.”

If you didn’t catch that, that “organizational decision” means his trades were vetoed by the one party who has the power to veto his decisions.

Speaking about things he’d do over, Gillis talked about scouting. We heard Gilman speak about this at length last year on the radio but it was interesting to hear Gillis’ thoughts.

“My biggest regret in actually running the Canucks was I didn’t change the scouting staff and system early enough,” he said.

“I should’ve done that a lot quicker, but with our group we felt we could work through a better process, make things better, and we came to the conclusion too late that wasn’t the case.”

Why didn’t he react more quickly?

“I wanted a chance to evaluate it properly.”

Near the end of the interview, Gillis took the chance to thank everyone who was part of the Canucks team he presided over. He also talked about how some members of the media treated his dismissal.

“The thing I really took issue with was when anyone made a request of me when I was the GM or president, I did my very best to honour that request and be part of what they were trying to do,” he said.

“The piling on that went on after we were let go by certain people, I just thought was cowardly. They had ample opportunity to say whatever they wanted to say to me or Gilman and they chose not to, and then they chose to paint me and some of us as some of the most evil things to ever happened in Canucks history.”

Will we see Gillis return as an NHL executive?

While the entire two hours were incredible radio (credit to Sekeres and Price for the way they navigated the interview) the biggest bombshell came when Gillis was asked if he’d be interested in working with the new franchise in Seattle.

“If they flattered me enough by asking if I’d be interested in talking with them, I’d be most definitely interested,” he replied.

Price: “So you haven’t talked with anyone there yet?”

Gillis: “I’m not going to say that, but if things continue to evolve and they get approval in December, I’m hopeful to have a discussion with them.”

“I’ve known Todd Leiweke (CEO of the new Seattle franchise) from when he was with the Seahawks and we’ve discussed working together in some phase over the years. He’s got great connections with the guys I worked with in Vancouver.”

So there you have it. It sure looks as if Gillis will be back in the saddle before long, and his new team will be have the benefit of having a president or GM who’s taken the time to learn from his mistakes and grown as a person and leader.

I also think we can safely say that was the best two hours of sports radio we’ve had in Vancouver in years.