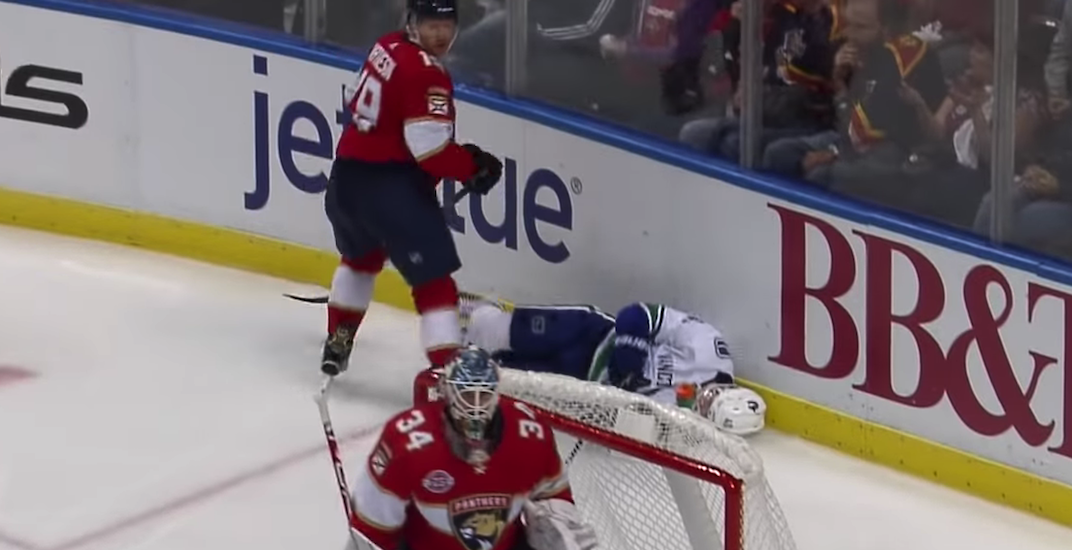 Elias Pettersson has certainly had an eventful start to his NHL career.

Scoring at a pace rapid enough to surpass even the most optimistic expectations, he has registered a point in every game and leads the Canucks in scoring with five goals and eight assists.

After being taken out of Saturday’s game, he has already picked up his first NHL injury, and is in the middle of his first controversy too.

The Canucks’ prized 19-year-old rookie suffered a concussion after he was body slammed to the ice by Panthers defenceman Mike Matheson. Matheson had a hearing with the league over the phone on Monday morning, as the NHL ponders suspending or fining him.

Pettersson travelled with the team to Pittsburgh, so that’s a positive sign. TSN’s Bob McKenzie reports that he’ll miss the rest of the road trip though, and will be out for a minimum of seven days.

Elias Pettersson (concussion) remains with VAN on their road trip (PIT Tues and WPG Thursday) but will not be seeing any game action for a minimum of seven to 10 days and perhaps longer depending on his recovery from symptoms.

Because of the nature of the injury, nobody really knows how long Pettersson will be out for. Antoine Roussel played his first game of the season on Saturday, after the team initially expected him back before the end of training camp.

Thatcher Demko suffered a concussion during the preseason, but that didn’t stop the Canucks from putting him on a plane to Utica. He’s still waiting to play his first game of the season.

Pettersson wasn’t the only player injured in Florida. Jay Beagle has a fractured forearm, McKenzie reports, suffering the injury blocking a shot. He’s expected to miss four to six weeks.

Adam Gaudette has been called up from Utica, and will slot into one of the vacated centre spots. Alex Biega, who was placed on waivers when the Canucks were 100% healthy for a hot minute, was not claimed by another team.

Monday practice lines for the #Canucks:

Gaudette was in Pettersson’s spot on the second line between Nikolay Goldobin and Loui Eriksson at practice on Monday, while Markus Granlund moved to the middle on the fourth line to take Beagle’s spot.