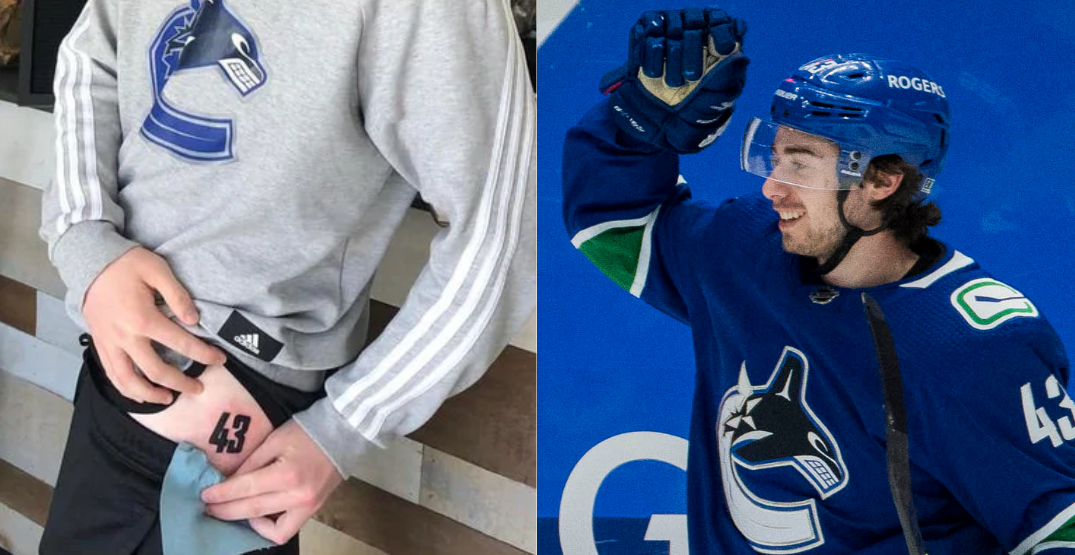 JC Clemas will never welch on a bet when it comes to his Vancouver Canucks.

Clemas, known on Instagram as @nucksmemes, was “a man of my word” after getting the number ’43’ of Quinn Hughes tattooed on his hind side to fulfill a promise he made to the Vancouver Canucks defenceman in an Instagram comment guaranteeing he’d get the ink work done in exchange for a goal against the Vegas Golden Knights on April 13.

“He posted on Instagram a day before and I wanted to have some funny comment so I made that comment,” Clemas said in a chat with Daily Hive. “Quinn is a great player obviously, but not a notorious goal-scorer, so I thought it was a safe bet.”

Hughes, who scored just a total of eight goals in 76 games this season, netted the game-winner in overtime, giving the Canucks a 5-4 win to help keep some slim playoff hopes alive at the time.

Clemas was watching live, tuning into the game from his dorm at Carleton.

“I was watching the game with a couple guys who aren’t hockey fans, but I explained the situation to them,” he said. “It’s 4-3 Vancouver, but Vegas scores to tie it with 40 seconds left, and I’m immediately disheartened. I forget about the bet completely, cause I’m so focused on winning an OT game, which the Canucks struggled with.

“Cut to (Conor) Garland storming in and Quinn grabbing the rebound. It all happened in seemingly slow motion. My mind clicked that it was Quinn, and I had bet an ass tattoo on a goal from him, just as he roofed it.

“So in the middle of exam season, in my dorm, I screamed ‘NOOOOOOOOOOOO ARE YOU KIDDING ME?’ at the top of my lungs.”

Quinn Hughes called game in overtime on his backhand, as well as a three-point night for Elias Pettersson, including a goal, in the 5-4 win over Vegas.@BudweiserCanada HIGHLIGHTS | https://t.co/YdRWEIYiAt pic.twitter.com/6NLSvRMtPj

No joking matter. And it didn’t take long for Clemas to start feeling the heat online.

He was immediately flooded with DMs about his bet — messages that continued until seeing the offer through almost two months to the day.

“At first, I was thinking like, ‘I probable don’t have to go through with this’ but after I got hundreds of comments and DMs about it, i just committed to it,” Clemas said.

“I’d never been anti-tattoo, but I also never really planned on getting one.” 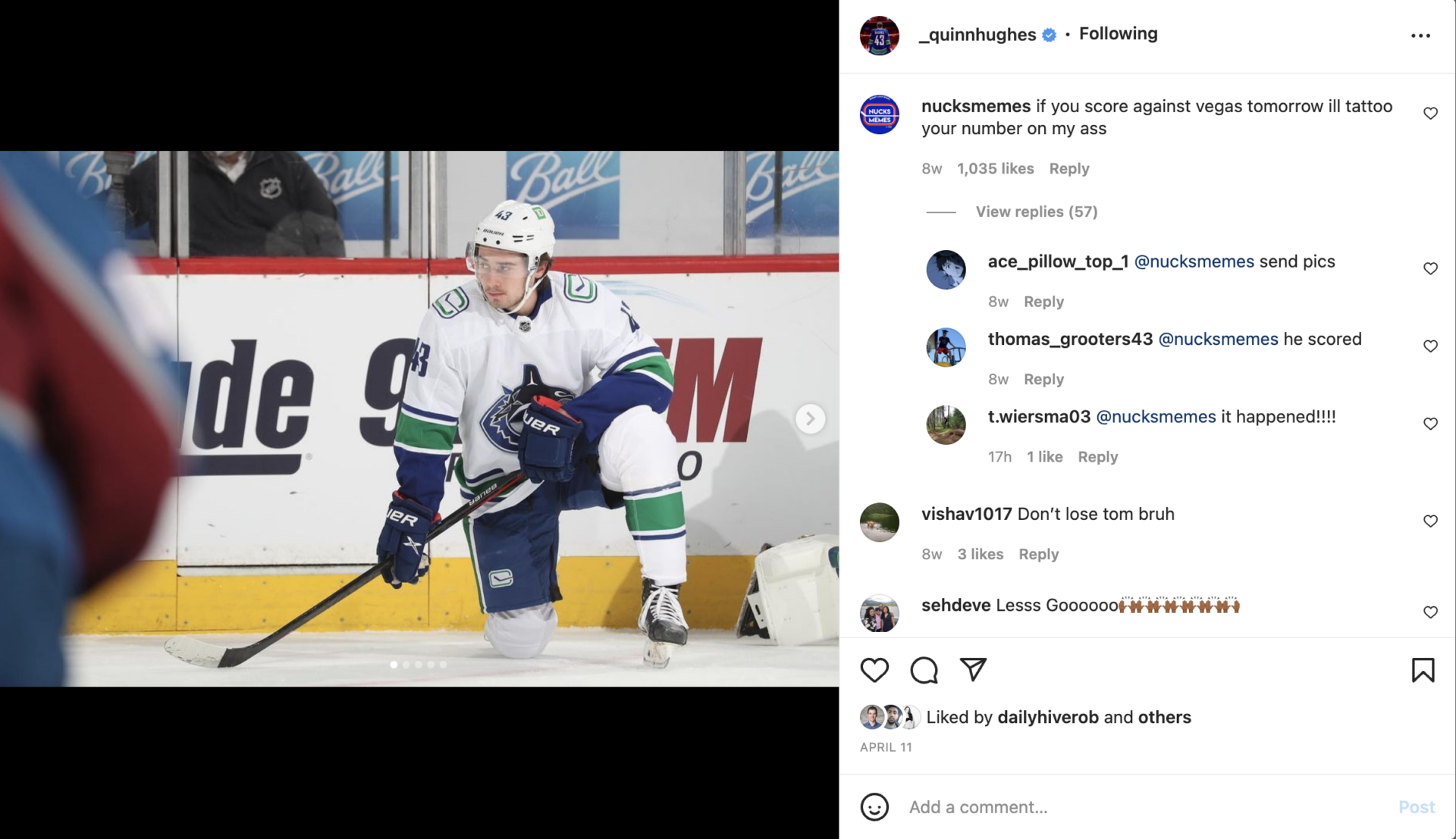 Clemas displayed his fresh ink, done at Village Tattoo in London, Ontario, on Instagram on Friday. It had over 8,300 likes by Saturday morning, including one from Hughes himself.

It made it all worth it, Clemas admitted.

“I instantly started screaming ‘NO WAY’ and ‘OH MY GOD’ as I ran outside to tell my dad,” he said. “I sent it to some group chats and we were all freaking out. Most of the excitement was obviously about Quinn acknowledging me, but there was a bit of me that was just relieved I didn’t tattoo my ass only for him to never see it.”

With, perhaps, a new one on the horizon.

“I mean…I do have another cheek… so who knows what the future can hold,” Clemas said.

“I definitely do not regret this tattoo. I mainly just find the whole thing really really funny.”