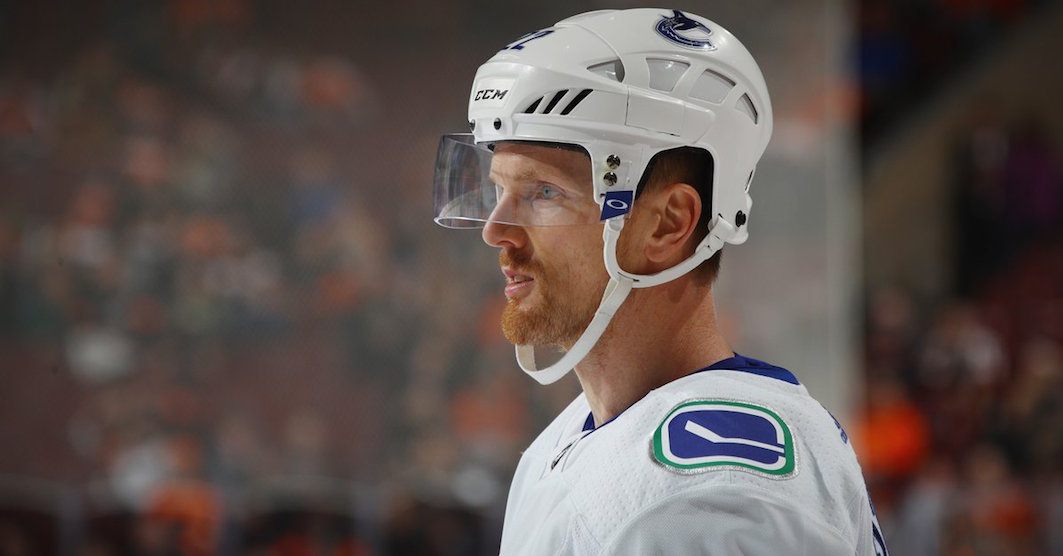 They also can’t blame “lucky goals” like Matt Murray did on Wednesday.

No, the Canucks simply got outplayed. Even with some help from the refs (the missed calls on Alex Edler and Michael Del Zotto come to mind), they couldn’t salvage a point in a 3-2 loss to Cory Schneider and the New Jersey Devils.

The Sedin twins looked dangerous against the Devils all night. Daniel picked up a goal and an assist, and is now just two points from hitting 1,000 in his career.

Wouldn’t it be something if he hit the milestone on Sunday against the New York Rangers and his former coach, Alain Vigneault?

Would be almost as good of a story as Henrik getting his against Roberto Luongo.

This is undeniably a hit from behind by Alex Edler. Making matters worse is that it was on Nico Hischier, an 18-year-old rising star who weighs 30 pounds less than Edler.

There was somehow no call made on the play, though Edler got a penalty shortly after that seemed an awful lot like a makeup call.

Still, I wouldn’t be surprised if the league looks at this one. Right in the numbers. This is the kind of stuff they want out of the game. Rightfully so.

Hischier stayed in the game, and he would later get his revenge on Edler.

Of course, being substantially smaller, his version of revenge came via the scoreboard. Hischier got to the puck before Edler behind the Canucks net and set up Taylor Hall for the game’s opening goal.

Later, Hischier used his speed and skill to get around Edler, which led to Sam Gagner taking a tripping penalty.

The Devils scored on that power play thanks to some terrible penalty killing that we’ll get to in a bit.

Hischier wasn’t done though, he picked up the second assist on the Damon Severson goal that put the Devils up 3-1 late in the middle frame.

For the first time in his career, Bo Horvat scored on the man he was traded for.

So the Canucks won the trade, right?

The Canucks appeared to be out of right-handed defenders when Erik Gudbranson left Wednesday’s game with an injury. Fortunately the other two (Tanev and Stecher) both returned to the lineup against New Jersey.

Alex Biega came out to accommodate their returns, meaning only half of the six defencemen that played in Wednesday’s game were also playing on Friday.

Gotta say, I’m a big fan of these pairings.

Last season with Willie D it was one puzzling lineup decision after another. This season Travis Green has – for the most part – done a great job with the lines.

At least at even strength, these pairings fared pretty well.

The Canucks have appeared to revive their power play of late, but their penalty kill continues to struggle.

Their man-to-man coverage doesn’t look good at all, and when someone gets beat, the other three Canucks have no idea how to adjust.

It starts with Ben Hutton being caught completely flat-footed and getting danced around by Will Butcher.

Tanev plays it well (par for the course for him) and races to catch up to Butcher so he doesn’t have a clean break.

He can’t do everything though. After Tanev bolts, neither Hutton nor Brendan Gaunce fill in Tanev’s original position, which allows Brian Boyle an easy tap-in goal once the pass gets through.

Poor Markstrom has no chance.

I loved this video the Canucks posted of the team taking the ice in New Jersey.

Take a left and go straight until you hit the ice. 🗺 pic.twitter.com/w6sNRWw5O3

I’m always big into the behind-the-scenes videos, and any chance to see some player personalities.

Love Boeser’s facial expression exiting the tunnel, his look of confidence is like that of a five-year vet. Kid is a gamer.

He also picked up an assist to extend his point streak to six games.

My favourite part though?

“Look at the grease!”