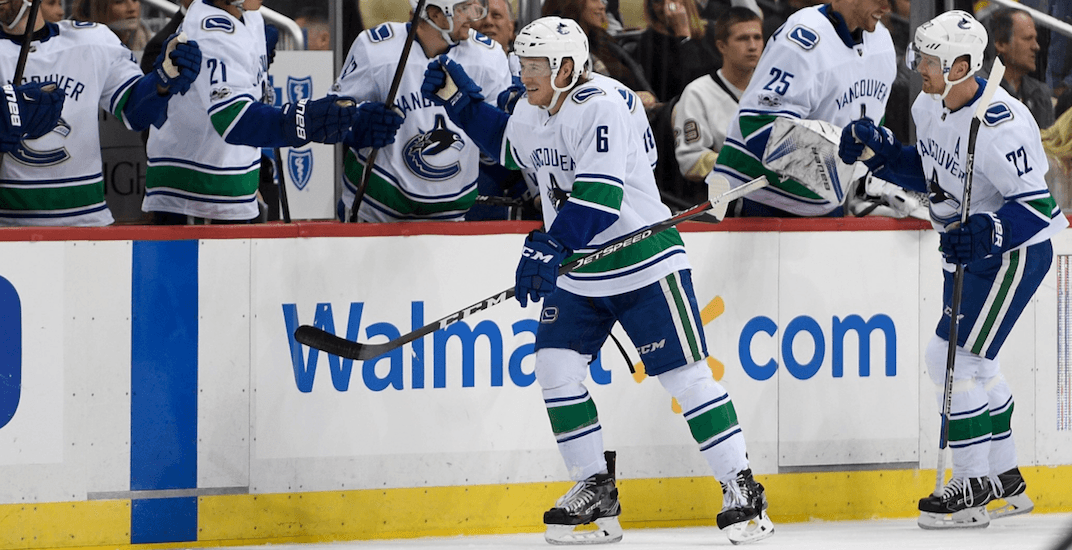 Brock Boeser is off to a nice start to his NHL career.

The 20-year-old Canucks rookie is turning heads with his play and is surpassing the already lofty expectations fans had for him coming into this season.

With 21 points in 19 games, the Burnsville, Minnesota native leads the Canucks in scoring. And with two goals against the Pittsburgh Penguins on Wednesday, he pulled into a lead in NHL rookie scoring – ahead of Arizona’s Clayton Keller in five fewer games.

Including the nine games he played at the tail-end of last season, Boeser now has 26 points in 28 career NHL games. Boeser has more points in his first 28 NHL games than the likes of Auston Matthews, Johnny Gaudreau, Patrik Laine, Filip Forsberg, and Jack Eichel had.

The best news? He’s not showing signs of slowing down.

While Boeser’s shooting percentage (20.8%) is likely going to regress, he’s also going to be put in more of a position to succeed than he has to this point. Boeser only ranks seventh in average ice time among rookie forwards, at 16:03 per game.

Here’s how he ranks among other NHL rookies this season:

After being a healthy scratch for the first two games of the season, he’s now a fixture on the team’s top line with Bo Horvat and Sven Baertschi. Boeser has also recently found a home on the team’s top power play unit in a prime shooting position – one that will allow the team to take advantage of his incredible shot.

That’s how he scored this rocket against the Pens:

Any harder and @BBoeser16 was ripping that through the net. pic.twitter.com/ihiyaRJp9z

If Boeser keeps this up, he’ll etch his name into the Canucks’ record books.

Boeser is on pace for 87 points, including 45 goals, this season. If he does that, he’ll shatter the rookie record for goals (34) and points (60) held by Pavel Bure. Bure accomplished those totals in 65 games, while Boeser can play up to 80 games this year – although it was easier to score goals in the NHL during Bure’s rookie year.

He’s also on pace for 42 assists, which would equal Dale Tallon’s rookie record. 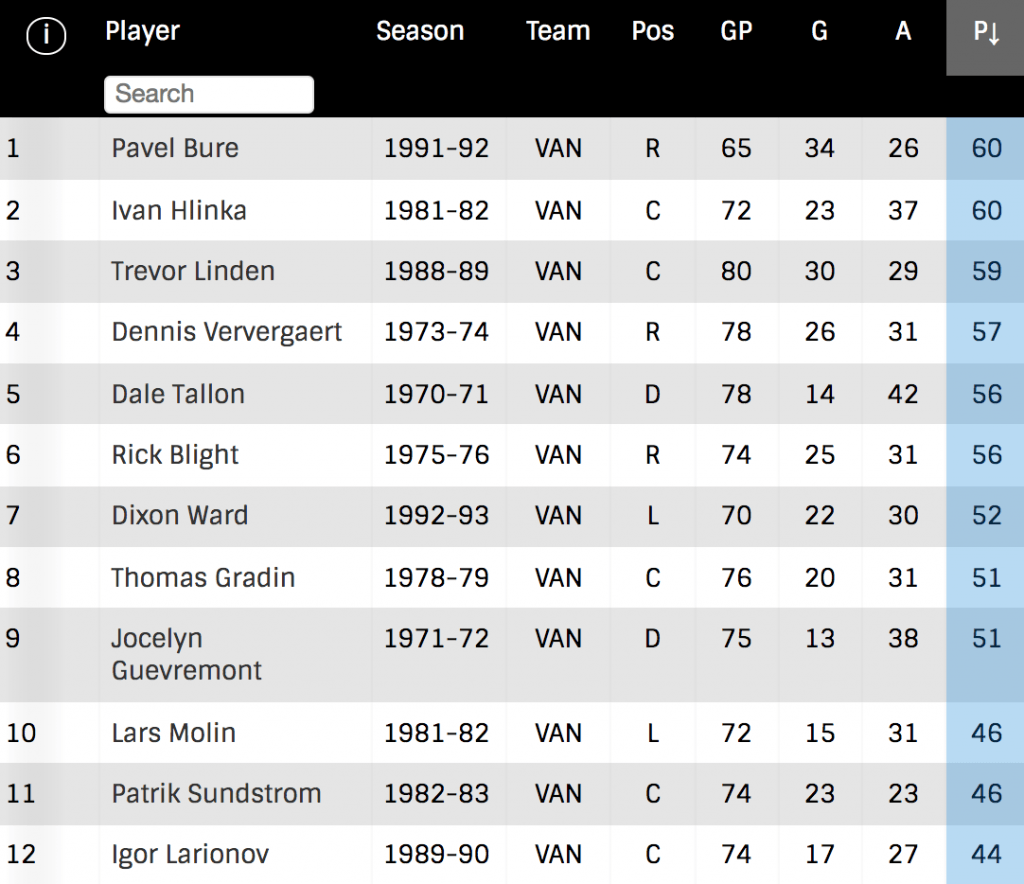 The soft-spoken winger has got a long way to go before compiling those totals, but if he does, this season would stand up as one of the best-ever by a Canucks player – rookie or not. Only Pavel Bure, Alex Mogilny, Markus Naslund, Todd Bertuzzi, and Tony Tanti have ever scored at least 45 goals in a season for Vancouver.

Boeser won’t come close to the best-ever season by an NHL rookie, a distinction held by Teemu Selanne with 132 points for the Winnipeg Jets in 1992-93. But 87 points would nothing to sneeze at.

An 87-point season would tie Boeser with Steve Yzerman for the 15th-most points ever scored by an NHL rookie. 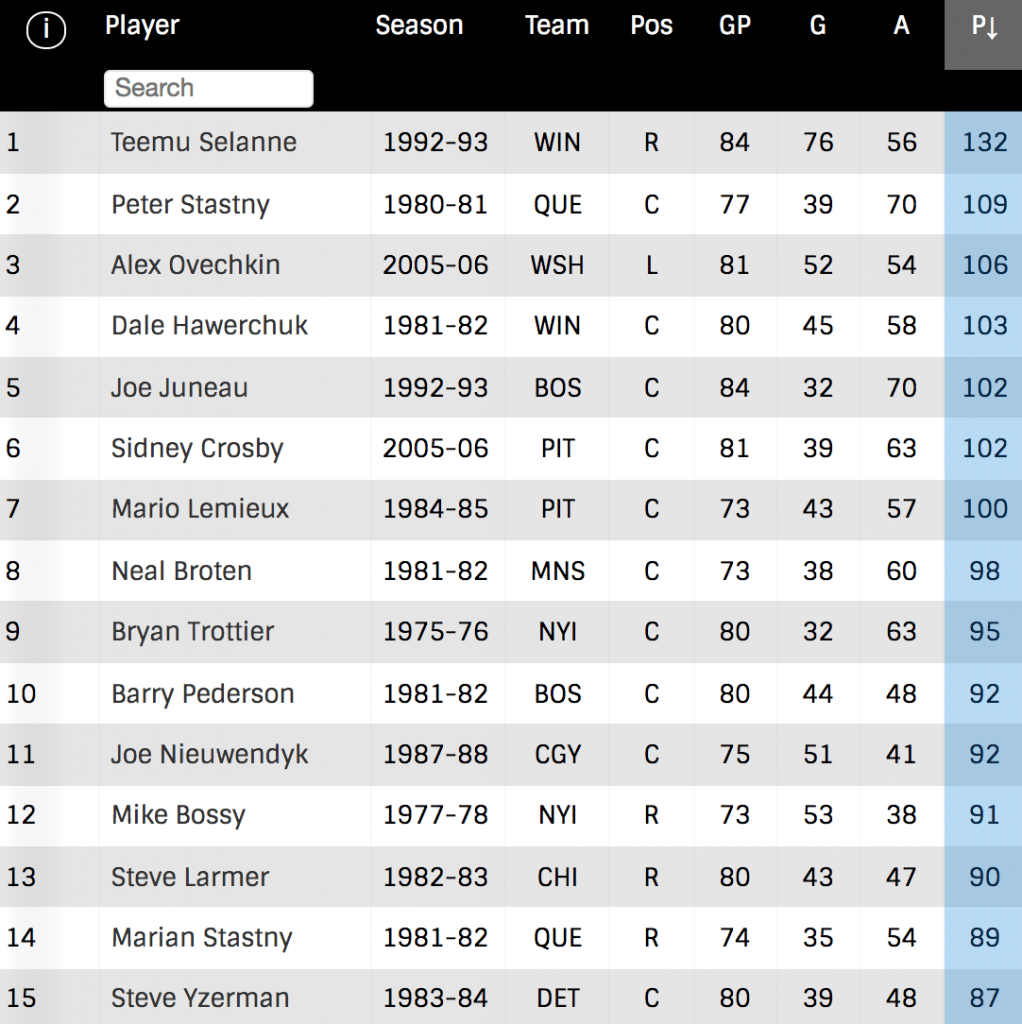 The Boeser bandwagon is certainly filling up in Vancouver. That’s no surprise as he’s the kind of talented young player that Canucks fans have been clamouring to see for a number of years now.

If he stays healthy, Boeser has a great chance to become the second player in team history to win Rookie of the Year, as Pavel Bure did in 1992.

The challenge for Boeser will be to keep his composure while maintaining his production over the course of an entire season as other teams begin scouting him more intensely.

But so far, so good.