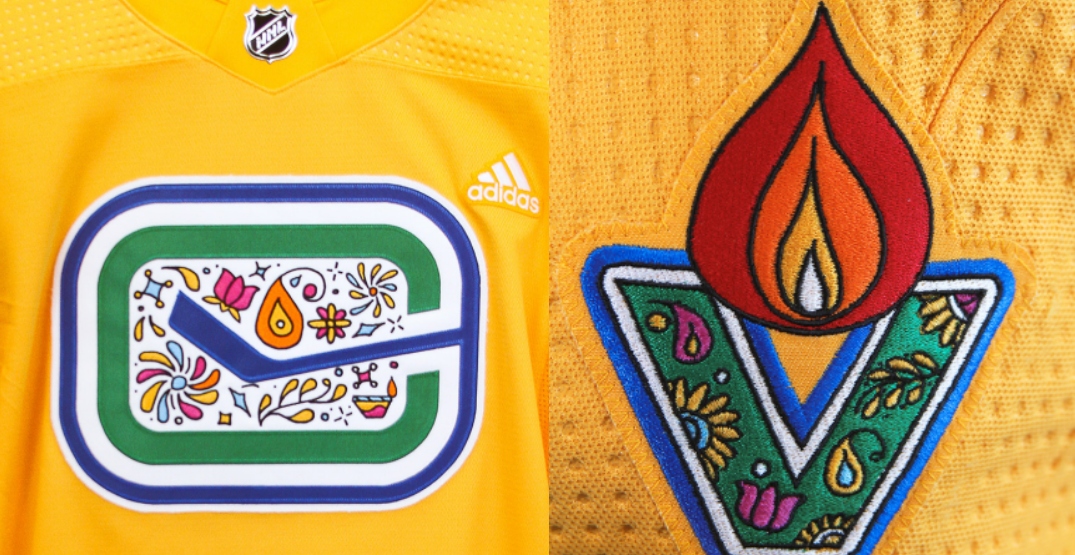 The Vancouver Canucks will be celebrating Diwali in style this week.

Diwali is the festival of lights, which is an important religious celebration for Hindus, Jains, and Sikhs (Bandi Chhor Divas). This year it is being observed on Thursday, November 4.

Prior to Friday’s game against the Nashville Predators, the Canucks will be rocking special warmup jerseys as part of Diwali Night — a first for this annual event. Player name bars will be featured in Punjabi and Hindi to complete the look.

#Canucks will wear these jerseys in warmup for Diwali Night at Rogers Arena on Friday.

They were designed in collaboration with local South Asian artist, Jag Nagra. pic.twitter.com/yKgLXLDAap

The yellow-coloured Canucks jerseys were designed in collaboration with local South Asian artist Jag Nagra, who developed custom artwork for the jersey.

“The main crest has been transformed into a special Diwali icon that incorporates the Canucks Stick in Rink logo stylized with iconography familiar with Diwali festivities including a diya (clay lamp), fireworks, lotus flower, stylized mustard plant and other South Asian motifs. The colours are reminiscent of the twinkling hues at dusk during these festivities and celebrations,” the Canucks explained in a media release.

“Traditionally, rows of clay lamps are lit on Diwali to mark the triumph of light over darkness and of good over evil. The secondary icon — the Johnny Canuck V — has been transformed into a decorative diya with a flame on top, which will be worn as a commemorative shoulder patch.”

Player-worn jerseys will be sold through an auction on Vanbase.ca, with partial proceeds being donated to the Punjabi Market Regeneration Collective (PMRC).

A Canucks spokesperson told Daily Hive that “limited quantities” of the jerseys will be for sale at the game, with cresting available for player names in English, Punjabi, or Hindi. Vanbase is also offering a limited edition Diwali collection, featuring the special Diwali Canucks logos on T-shirts, hoodies, pins, keychains, and lanyards.

Here’s a list of what else the team has planned: