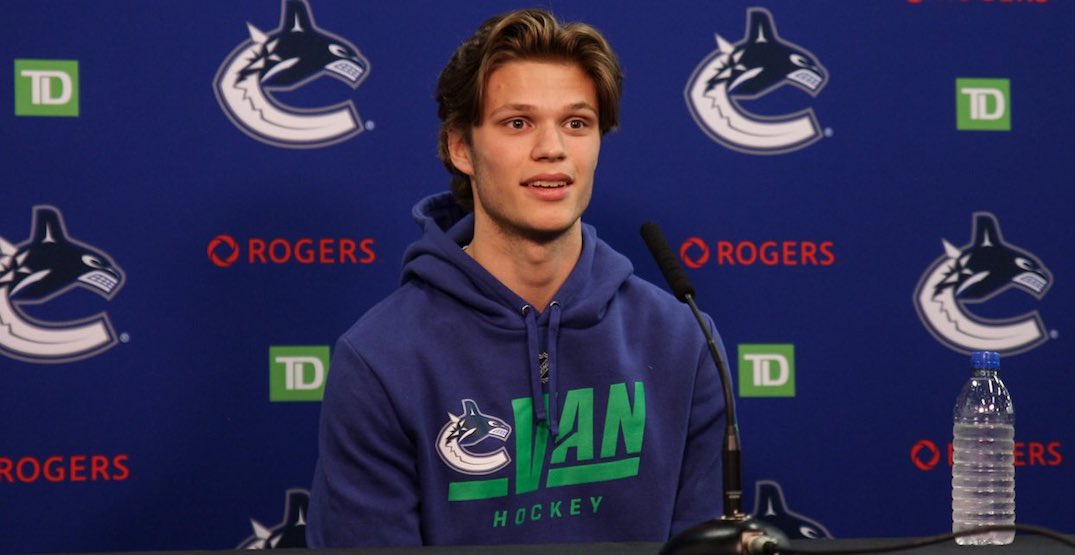 In 2005, a young, newly drafted Alexander Edler, made his way to North America to join a powerhouse Okanagan-based WHL team, with designs to get acclimated in a new country’s culture, playing style, and way of life.

Viktor Persson is on the same path.

While comparing Persson, the Vancouver Canucks seventh-round selection in 2020, to the Canucks all-time leading games-played defender is completely unfair, it’s hard to ignore the symmetry of the 19-year-old prospect’s journey to North America.

This wasn’t always the plan for Persson, who was set to join the Kamloops Blazers a year earlier– the pandemic not making that possible. Regardless, the Hedesunda-born defender is in the WHL now, a full member of a Blazers team that has designs to go far this season. He’s off to a productive start, scoring seven points in eight games-played so far this season.

Persson is a 2001-born overager in the WHL with a November birthday. This means that he is older than most players in the league; production, skill-refinement, and execution should be present in his game given his age. Persson is legitimately one of the few players in the entire league that has played professional hockey games.

Persson’s Blazers team is also one of the best CHL teams in the country. Kamloops recently landed fifth on the CHL Team Power Rankings. The team has a plethora of scoring overagers, drafted star-level quantities like Logan Stankoven, and a bevy of future NHL draft picks. They are a force, dropping upwards of 40 shots a game in my live viewings.

With this context in mind, you will be delighted to know that Persson plays in a top-pairing role for the Blazers, taking hard match-ups, killing penalties, and is prominently featured on their second power-play unit. Like gear in the famous English icon, Big Ben, Persson is a major part of a CHL marvel.

So what do the Canucks have in Swedish defender?

What’s ever apparent across all eight of Persson’s WHL games, is his ability to defend against transitional attacks. The Swede is like an airport ground marshal, directing traffic, through the use of his stick and body positioning. Watch as Persson kills rush-after-rush with his angling, stick-work, and physicality.

Persson’s gap control remains consistent, his feet steadied to combat weight-shift manipulations. Timed activations and punishment along the boards permeate through each sequence. The smaller ice-surface has allowed the overage-defender to suffocate space from his opponents at much higher intervals than in Sweden, activating into transition stopping pins in the corners, eliminating further opponent activations.

While his current pivoting ability is a detriment to his overall game, the frequency in which it becomes an issue in the WHL was far fewer than my previous viewings. Like any young defender, four-way mobility and pivoting will need to be improved upon to combat the up-ticked speed of the NHL. In the clips below you can see Persson’s pivoting in action, along with some secondary-threat reads that he missed.

The former 7th-round pick, will have to be a very proactive scanner to recognize and pivot early when he is attacked with an overwhelming amount of speed off the wings.

On the opposite side of the coin, Persson has proved to be a quite accomplished breakout maestro for the Blazers in his short time with the club.

His transitional habits are in short, immense. Persson’s breakout passes are akin to a rubber band snapping back to its original form, executing facilitations tape-to-tape on most occasions; velocity, accuracy, and two-touch facilitations highlight his attempts. There’s also a lot of passing skill in his game, Persson making use of the boards, his backhand, and slips through opposing defenders.

What’s probably most remarkable is the Swede’s ability to execute breakout passes while in-motion, moving his feet to open up more lanes and options while a continuing forward momentum attack. On top of these habits, Persson is an active rush-participant off-puck, who executes give-and-go’s and files through the slot to magnetize defenders and open space for his teammates. Oftentimes he provides pass support to the very teammate he just facilitated to.

Persson also possesses some great large-ice maneuverability habits when he carries the puck. Not only does he have a ton of escapability under tight checking pressure out of his puck retrievals, he also protects the puck by holding it on his hip, implements weight-shifts to misdirect forechecking pressure, and can string passing plays out of these activations. Have a look at some of his carry attempts.

After said transitional attacks, Persson is fairly competent running plays off the blue line. While he is simplistic in his approach, the Blazers’ defender funnels pucks from the perimeter of the ice, into the high slot. From there, Persson is manipulative with the puck, moving to open pass lanes, faking shots into slap-passes, using eye-line manipulation, and occasionally sending bombs into traffic.

Wristers through legs and even activating deeper on the weak side to open himself up as a pass option are all part of his repertoire.

These are all positive habits that should push some level of competency at higher professional leagues like the AHL.

Persson has spent the vast majority of his shifts with 17-year-old, 2022 NHL Draft prospect Mats Lindgren, son of the former Canuck of the same name. As they structurally stand, Persson handles a majority of the pairing’s net-front traffic, activating regularly into pins and physical retrieval battles below the goal line. Lindgren supports said activations as the pair looks to work transitional plays out of their zone.

The apotheosis of Persson’s game while defending sustained pressure is his box-out ability, proactive stick-control and the leveraging of his frame to win battles. He is like a bouncer, deflecting away unwanted traffic from the net front. Like any bouncer, Persson will have to make sure he is always scanning for the next threat, as he becomes a bit too puck-focused on longer sequences.

With this analysis in mind, Persson is exhibiting an overabundance of translatable habits that should at least help him become an AHL contributor.

While his pivoting ability and defensive processing might become formidable hurdles to overcome, it wouldn’t be off-base for the 20-year old to be a bottom pairing defender down the road — even when considering the context mentioned at the start of this piece.

His handedness is rather valuable in today’s game and his adaptation to a smaller-ice surface has resulted in more benefits than question marks. With the majority of the WHL season left on the horizon, there is still plenty of time to keep honing skills and habits.

Look for Persson to sign an amateur try-out contract with the Abbotsford Canucks if things line up right at the end of the WHL season.