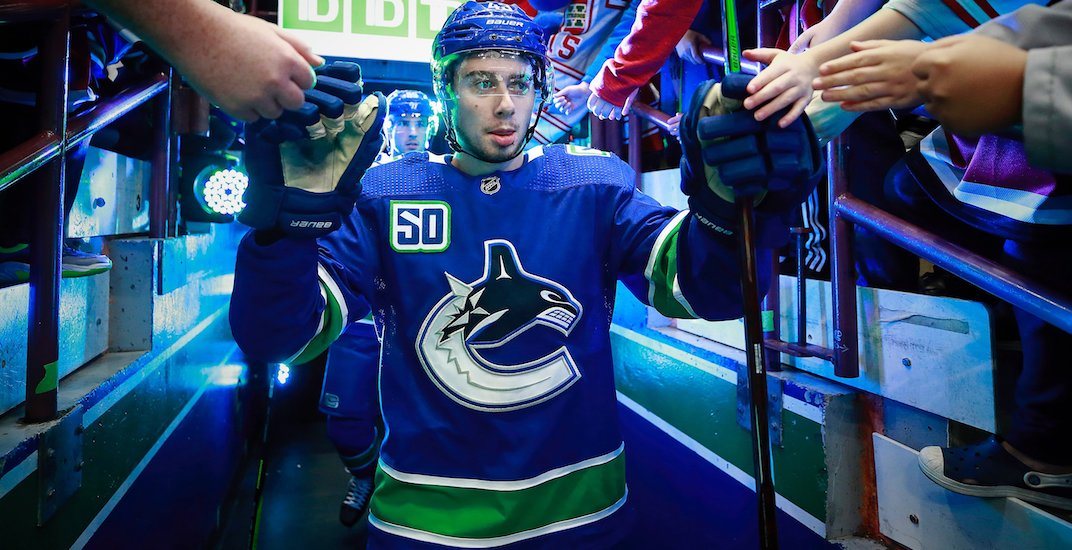 Never in the Vancouver Canucks’ 50-year history have they gone five years without making the playoffs.

Are they really going to set a record for futility now, during their 50th anniversary season?

Oh sure, it’s easy to pile on this team after they’ve posted the second-lowest number of points in the league over the last four seasons (thank you, Buffalo Sabres).

It’s also easy to jump on the bandwagon for a team that boasts one of the better goaltending tandems, one of the league’s rising superstars, and a potential superstar rookie on defence.

The Canucks arguably haven’t looked this good on paper since Jim Benning took over as general manager of the Canucks, and I’m going to tell you why that’s going to translate to the team’s first playoff birth in five years.

Elias Pettersson is a superstar in the making

Most questions about the Canucks making the playoffs start and end with Elias Pettersson. There’s no doubt that this team needs him to stay healthy if they want to make the playoffs.

If he is healthy, watch out.

Pettersson preemptively lifts the defenders stick to give himself more room for the one timer #canucks pic.twitter.com/KoZjnQROp9

The reigning Calder Trophy winner scored at nearly a point-per-game pace last season. If he kept up his scoring pace over the first half of last season, he would have ended up in the same ballpark as other star rookies such as Alex Ovechkin, Evgeni Malkin, and Patrick Kane.

During the summer I wrote a piece trying to predict Pettersson’s production based on past Calder Trophy winners. Based on his best comparables (Auston Matthews, Patrick Kane, and Peter Forsberg), there’s certainly a chance that Pettersson’s busts into the superstar echelon and flirts with 90 to 100 points.

Horvat and Boeser still have room to grow

Behind Pettersson, the Canucks will heavily rely on Bo Horvat and Brock Boeser to produce offence. The good news is that both players have the capacity to hit the 70-point threshold for the first time in their careers.

With Bo Horvat and Brock Boeser reunited, the Bromance is very real pic.twitter.com/5uZXuG1SLf

Health is a huge factor for Boeser, especially after suffering a preseason concussion. When healthy over the past two seasons, his 1.1 goals-per-60 minutes at even-strength ranks among the league’s best, ahead of stars such as Timo Meier, Brad Marchand, Mark Stone, and Johnny Gaudreau.

As for Horvat, are we really going to doubt a guy who’s improved every season since entering the league?

Look, I’m not going to come and say that the Canucks forward depth is spectacular. I will say that it looks better than it has at any other point under Benning.

Travis Green also knows that this team needs more than just the marquee players to be successful.

“It can’t just be Petey, Hughes, Boes and Bo. We need some other young players to come in and help us,” Green said following the conclusion of preseason.

Micheal Ferland back into the lineup and he gets his first of the preseason driving to the front of the net. #Canucks pic.twitter.com/MP9KkoK9aC

The price to acquire J.T. Miller was steep but he’s a physical, playmaking winger who should easily surpass the 50-point plateau. Micheal Ferland is also a good bet to hit 20 goals alongside Pettersson, as long as he stays healthy (a big caveat with many Canucks).

There are also some X-factors for the Canucks on the wings with Tanner Pearson, Josh Leivo, and Jake Virtanen. That doesn’t even include Antoine Roussel, who played above expectations in an injury-shortened campaign.

The centre depth will be questioned as long as Brandon Sutter and Jay Beagle continue to play down the middle. If Adam Gaudette is able to break through as a productive NHL player this season, then this forward group could surprise a lot of teams.

Speaking of X-factors, there are none that have the potential to impact the Canucks other than Quinn Hughes.

In just five NHL games last season, Hughes pulled off wizardry with the puck that’s been seldom seen in 50 years of Canucks hockey.

His first point in the NHL wasn't too bad, absolute filth! pic.twitter.com/kHrvlVYO0e

Will he have lapses on the defensive side of the puck? Sure, but he’s well-positioned to provide highlight-reel offence from the back end, something the Canucks have been missing for, well, 50 years.

For once, the goaltending tandem looks formidable

Not since the Cory Schneider and Roberto Luongo days have the Canucks had an above-average goaltending tandem. With Jacob Markstrom finally playing like a number one goalie and Thatcher Demko in the fold, this tandem has the potential to be above average.

For that to happen, the Canucks need the Markstrom from December 1 onward from last season. In 40 games after that date, Markstrom’s .921 save percentage was 10th among starting goaltenders.

Demko only played in nine games last season, but his .913 save percentage was actually better than Markstrom’s .912.  If Demko continues to push Markstrom for playing time, that healthy competition will pay dividends for the Canucks in the standings.

They play in the NHL’s weakest division

If the Canucks were playing in the Central Division, then it would be easier to doubt their playoff odds. However, they play in arguably hockey’s weakest division, and this young team needs to take advantage of that.

Although the Vegas Golden Knights, San Jose Sharks, and Calgary Flames are clearly better than the Canucks on paper, they aren’t without their flaws. The other four teams in the division are all beatable teams, and the Canucks will play a combined 16 games against the Los Angeles Kings, Anaheim Ducks, Edmonton Oilers, and an improved Arizona Coyotes.

Last season, the Coyotes, Sharks, and Golden Knights were kryptonite for this team, as they went a combined 10-1-1 against the Canucks.

With an improved roster, the Canucks are well-positioned to steal some more points in a weak division. If they’re able to do that, there’s a good chance we’re talking about playoff hockey in this market for the first time in five years.