After a sparkling rookie campaign for the Vancouver Canucks in 2018-19, what will Elias Pettersson do for an encore during his sophomore season?

Scoring 66 points in 71 games, the young Swede turned heads in his first NHL season, winning the Calder Trophy as Rookie of the Year.

Pettersson got off to an amazing start before tailing off somewhat in the second half of the season. If he kept up that first half pace, Pettersson would have been solely compared to first-year seasons from Evgeni Malkin, Sidney Crosby, Alex Ovechkin, and Patrick Kane.

Unfortunately, the man nicknamed ‘Alien’ came back down to Earth a bit in the second half of the season, when teams started to zero in on shutting down the Canucks’ budding superstar. 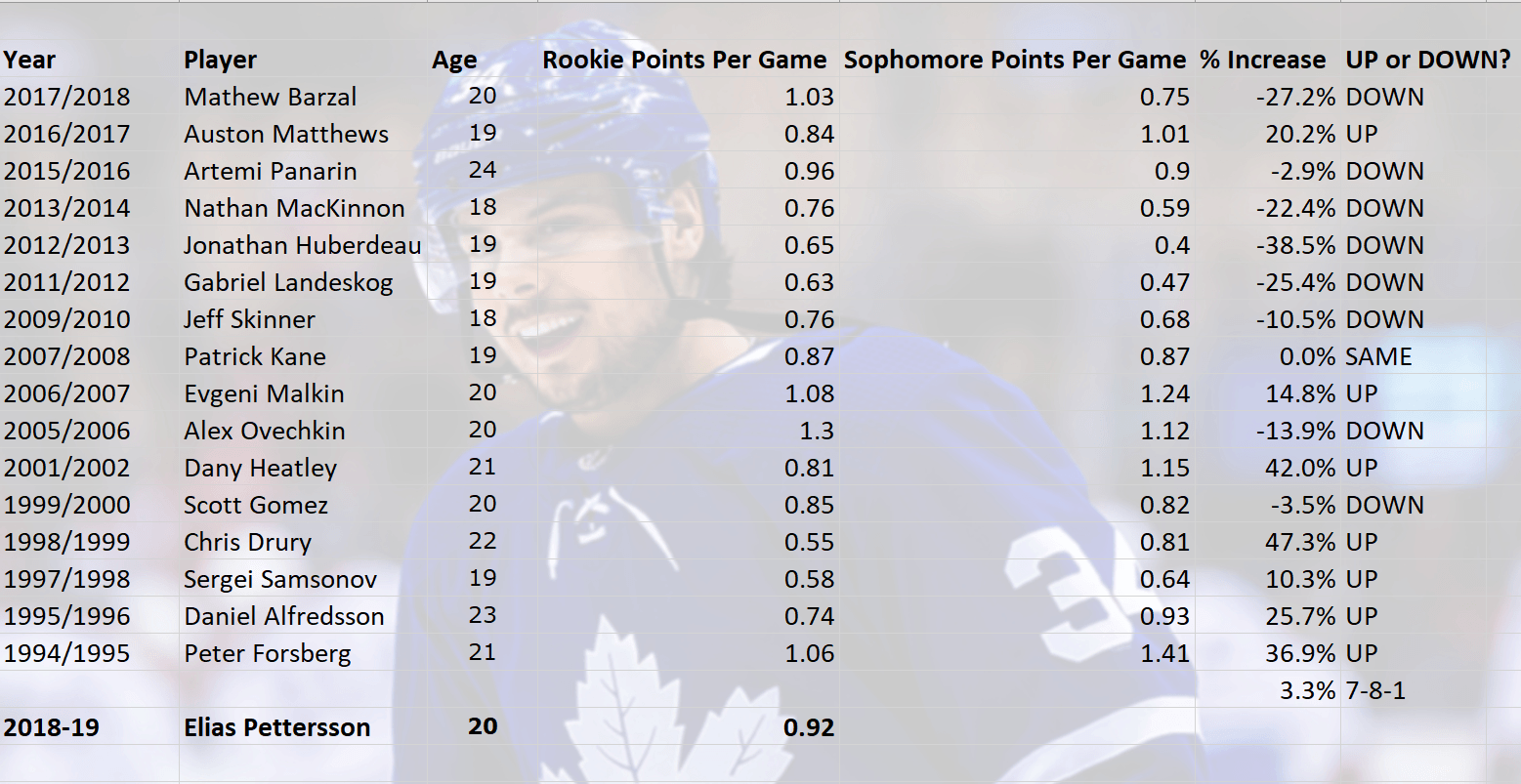 A look at the 16 forwards who have won the Calder since 1994-95, and their production the following season.

Although forwards in their early 20s usually tend to trend upward, you can see here that more than one half of forwards saw a dip in their production after winning the Calder Trophy. With a small sample size that can happen for a variety of reasons.

Take last year’s winner Mathew Barzal, for example. The Islanders scored 20% fewer goals as a team during the 2018-19 season, as they completely revamped the style of hockey they played. It obviously worked out better for the team, but Barzal’s production dipped by 27% because of it.

I eliminated everyone who scored more than 0.25 points per game above or below Pettersson.

I also eliminated Daniel Alfredsson and Artemi Panarin on the basis that they were three or more years older than Pettersson when they won the Calder.

Here are the remaining nine comparable players to Pettersson:

Pettersson is clearly among some elite company with these players, as all of them have spent multiple seasons as first-line players at some point in their career. Four of the nine have also won multiple Stanley Cups.

Still, there is a big variance in sophomore production among these players, making it pretty murky to pinpoint Pettersson’s best comparable.

Here are the three players that best compare to Pettersson moving forward:

Toronto’s newest multi-millionaire had a similar impact on the Leafs as Pettersson did for the Canucks. Hopefully for Pettersson, this means a 20% uptick in his point production next season.

Patrick Kane was the only Calder winner on this list with stagnant production in year two. However, he did get his first taste of playoff action as a sophomore, something Pettersson will aim to do in his second NHL season.

Pettersson and Peter Forsberg have been compared for a long time, especially after Pettersson eclipsed Forsberg’s production at the same age in the SHL.

What it means for predicting Pettersson’s production

Let’s take a look at a couple of totals to predict what Pettersson could accomplish next year.

Over a full 82 games last season, Pettersson would have posted 76 points. If Pettersson were to increase his production by that 3.3% average from the first graph, he’d put up 78 points over 82 games.

If we based it off of the 5.6% increase among Pettersson’s closer comparables, his production would be 80 points over a full season.

Health is obviously key, but here’s why those totals are probably the floor for Pettersson in his sophomore campaign.

We all witnessed those blistering one-timers on the power play last season, but as a whole, the Canucks were a bottom-10 team with the man advantage. The addition of Quinn Hughes specifically should help with that, although Tyler Myers, J.T. Miller, and Micheal Ferland could help boost the power play as well.

2. The team should be better

What was one of the common trends among rookies that saw a drop in year two? The team was worse overall. Say what you want about the Canucks offseason moves but on paper, they are a better team compared to last year.

3. Goal scoring is on the rise

If we look at the three closest comparables to Pettersson, their average point-per-game increase in year two was 28.55%. If we apply that to Pettersson, that prediction would have Pettersson posting 97 points in his sophomore season.

That’s a tough ask, though it should be considered the ceiling if all goes right for Pettersson in year two of his NHL career. Even though it’s not probable, he certainly has the skillset and the superstar potential to make it happen.