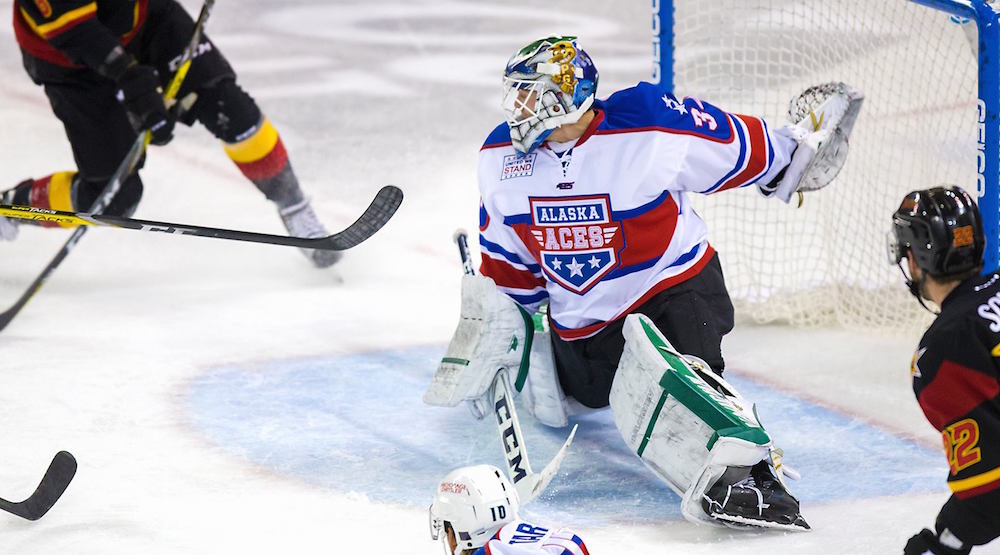 The Vancouver Canucks have called up 25-year-old goaltender Michael Garteig from the Alaska Aces of the ECHL to back-up Jacob Markstrom tonight against the Arizona Coyotes at Rogers Arena.

Ryan Miller has the flu, which meant that the Canucks needed a last minute back-up for the second time this season. Unlike last time, they won’t need to turn to the UBC Thunderbirds for help.

A Prince George native, Garteig was signed as an undrafted free agent out of Quinnipiac University by the Canucks in April. Last year he helped lead his school to the NCAA Frozen Four, eventually losing to Brock Boeser, Troy Stecher, and the University of North Dakota in the championship game.

Garteig was called up in lieu of Thatcher Demko or Richard Bachman who are higher on the Canucks’ organizational depth chart. Getting to Vancouver from Utica, where the latter two goaltenders play, is a logistical nightmare, which is why Garteig got the call.

Travel from Anchorage, Alaska is no walk in the park either, but Garteig should be used to it. Vancouver is closer than Alaska’s nearest rival in Boise, Idaho (5+ hour flight with a stopover in Seattle). Alaska was en route to Wichita, Kansas for three games in three nights, beginning tomorrow.

The Anchorage to Wichita trip, if you’re wondering, is a nine-hour trip by plane with stopovers.

If you’re wondering if Alaska has the worst travel schedule of any team in the world like I was, they don’t! That distinction goes to the KHL, who have teams as far apart as Zagreb and Khabarovsk (nearly 18 hours away from each other by air travel according to Google).

Having to grab a goalie from an ECHL team will once again spark up debate over the Canucks having their AHL team based in Abbotsford, something the Flames did for five seasons.

It’s something that would work better in today’s conditions, given that the AHL has expanded to California, although travel would still be significantly worse day-to-day than it is for players in Utica. Utica has four teams in their division who are less than two hours away by car.