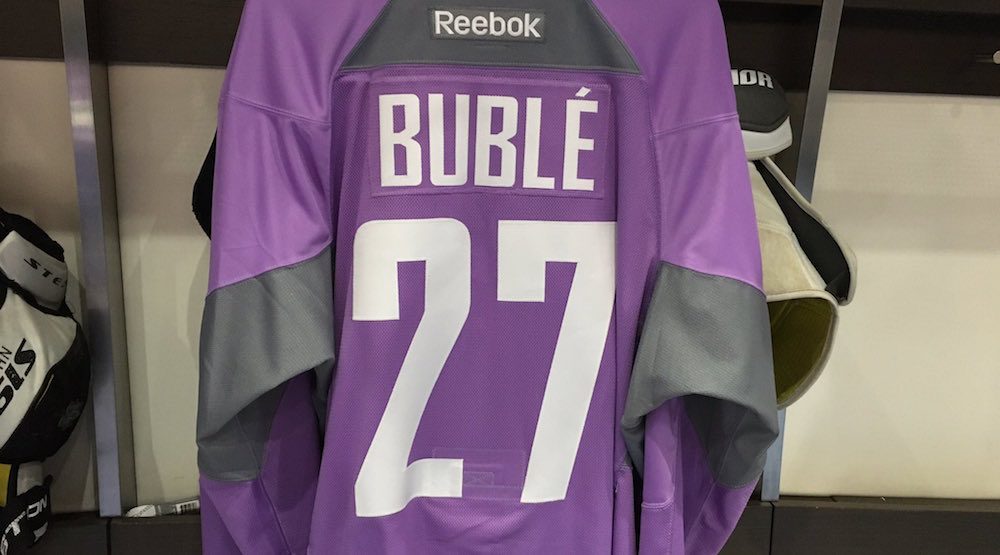 Instead of his surname, Canucks defenceman Ben Hutton will sport the name Bublé on the back of his jersey before tonight’s game against the Arizona Coyotes.

Each player will wear a lavender Canucks jersey during tonight’s pre-game warmup, with the name of who they are “fighting for” on the back as part of Hockey Fights Cancer Night. It’s a touching tribute.

Hockey Fights Cancer is an NHL-wide initiative that was founded in 1998 to raise money and awareness for cancer research.

Hutton chose the name Bublé for Noah, the three-year-old son of Vancouver’s Michael Bublé, who was recently diagnosed with cancer.

Brandon Sutter also chose the name of someone who was in the news recently, honouring Nicholle Anderson, the wife of Ottawa Senators goaltender Craig Anderson.

Derek Dorsett took it one step further, flying someone in from his hometown in Saskatchewan.

Dorsett flew this little guy in from his hometown to be at the game tonight. #HockeyFightsCancer #Canucks pic.twitter.com/Jq4YXB9zWo

Meanwhile, Bo Horvat will wear the name of his grandfather who passed away six years ago.

Bo says his grandfather was his biggest fan and playing in #NHL was their shared dream. He passed in 2010. #Canucks pic.twitter.com/h2162vUral

The name on the back matters as much as the logo on the front for the #Canucks tonight. #HockeyFightsCancer https://t.co/Rw6dxr9a0n pic.twitter.com/x7gUgiVxBe

Hockey players are always told to fight for the name on the front of their jersey, not the back, but most certainly an exception will be made for tonight’s game.