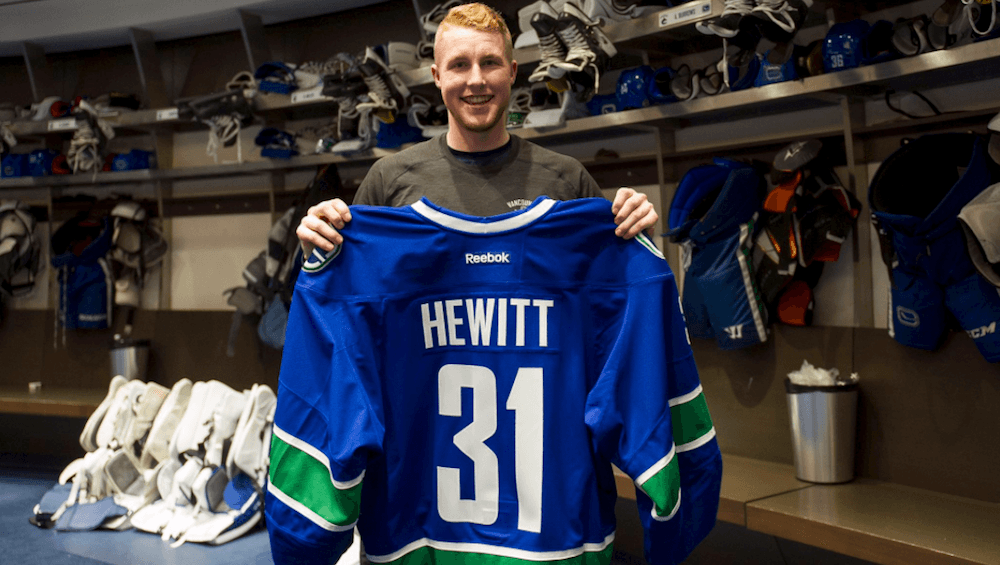 What would you do for a chance to play just one game in the NHL?

For anyone that has ever played hockey at a high level, they’d do just about anything: make personal sacrifices, move away from home at a young age, train all summer, work hard all winter, play through pain. It’s the price you have to pay.

Well, goaltender Matt Hewitt did all that, except he never got the payoff.

When the Canucks learned on Tuesday morning that goaltender Ryan Miller would be unable to suit-up for the team’s game that night, the search began for someone to back-up Jacob Markstrom.

With Richard Bachman and Thatcher Demko in Utica, and Michael Garteig in Alaska, there wasn’t enough time to fly in another goaltender from within their organization. That’s when the Canucks turned to the UBC Thunderbirds, and Hewitt, to lend a hand.

“The whole day has just been really exciting, a lot of emotions I’ve had to deal with all day,” Hewitt said following the Canucks’ 2-1 overtime win against the St. Louis Blues. “Just coming to the rink and knowing that I was going to dress for the Canucks tonight was just kinda out of my mind.”

He moved to Saskatchewan at age 17 to play for the WHL’s Regina Pats. Hewitt played three seasons in Regina, appearing in 146 games.

He was never drafted by an NHL team, and once his junior career was over, he decided to play hockey and study sociology at UBC.

UBC is a great place to get an education while playing a high level of hockey, but it’s not exactly a path to the NHL for most players.

Now 23 and in his fourth year with the T-Birds, his dream of playing in the NHL was most certainly done.

Then out of nowhere, for one night, his dream became a reality.

“I guess I can add this to my resume, to my career, to say that I lived the dream for one night. Not many people can that they did that.”

Not only can Hewitt say he played in the NHL, but the Canucks fan from New Westminster can say that he played for his hometown team.

Hewitt shared similar stories from other goalies – Chris Levesque is the most famous one – that have had the opportunity to be an emergency recall goalie.

Canucks players were very welcoming, making him feel a part of the team, even though he was unlikely to contribute in any meaningful way.

The best part about this story though, is Hewitt’s personality.

“If they ever need me back, they know where to find me, you know, 1-and-0 so far,” the back-up goalie said after his first, and likely last, NHL game.

“They made me feel like one of the boys right off the bat. I got chirped here and there, I didn’t mind dishin’ the chirp back to them, you know, that’s hockey culture.”

Wait, Hewitt was chirping NHL players? Did he call the Sedins old? Did he tell Tanev his shot sucks?

Hewitt was never really in danger of coming into the game, although Markstrom was knocked down by Alex Steen at one point.

“I knew Marky was fine. He was battling all game and I had his back. You know, if they needed me, I was here.”

I love this guy.

Markstrom, for the record, said he wasn’t worried either.

“He was looking great in the warmup there, I wasn’t too worried,” the Swedish netminder said.

When pressed, Hewitt did admit that the chance to come into the game crossed his mind.

Still beaming from his 60+ minutes of fame, it’s back to reality now for Hewitt, as the Canucks will likely bring in Richard Bachman for Thursday’s game against Buffalo. Hewitt, meanwhile, will rejoin the T-Birds who play back-to-back home games against the University of Alberta on Friday and Saturday.

“I’m looking forward to going back and playing hockey for UBC, but I’ll definitely remember this for the rest of my life.”