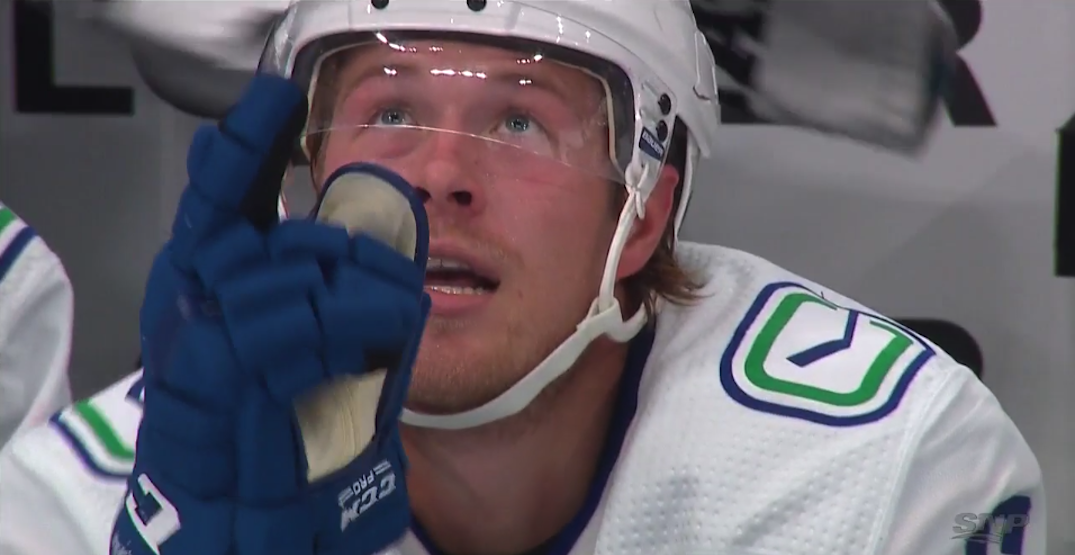 Thursday’s game was special for many reasons for Vancouver Canucks star Brock Boeser.

Playing against his hometown team, Boeser scored the winning goal in a 3-0 win over the Minnesota Wild in Game 3. It gives the Canucks a 2-1 lead in the best-of-five series.

The Sportsnet television broadcast caught Boeser on the bench moments later, pointing to the sky, in what was clearly an emotional moment.

After scoring today, Brock Boeser sends some love to his friend, Ty Alyea who passed away in a car accident on this day in 2014. pic.twitter.com/VTOld3Hooy

Boeser pointed upwards to remember his close friend Ty Alyea, who died in a car accident six years ago on this day. The goal was for him.

“It’s obviously a tough day for my friends and I,” Boeser said after the game. “It’s crazy how fast time flies. To be able to get one for him, it’s something special. It’s an emotional day for sure. Tried to make the most of it today out on the ice.”

This is the first time that Boeser has played a professional game on the anniversary of Alyea’s death, given that hockey usually takes the summer off.

“Obviously it’s weird and different that we have a hockey game in August, but I know my friends are all hanging out today and being with each other.”

This is Boeser’s first taste of postseason hockey in the NHL, and a chance to redeem himself following a season that wasn’t up to his high standards.

He battled injuries and was even bumped down to the third line at one point this season, going goalless in each of the final 12 games before the pause.

“I didn’t think I scored enough for our team this past year and I needed to come here and they needed me to score and help our team win. Overall I thought our will to win was high today, we did the little things right, that gave us success and the big win.”

When the Canucks returned to the ice for training camp this summer, Boeser was not only on the second line, he was on the second power play unit as well, as newcomer Tyler Toffoli had taken his spot in both roles.

With Toffoli missing the last two games due to injury, Boeser has taken full advantage. He scored his first-ever postseason goal in Game 2, and followed that up with a goal and an assist in Game 3.

“We’ve all seen Brock over the years here… the things he can do with the puck — the shot, the goals-scoring,” said head coach Travis Green after Thursday’s big win. “But what I love right now is he’s really bought into the other parts of the game. Puck recoveries on the power play. Wall battles in your own zone. Forechecking, trying to turn over a puck. And getting to the net.

“You want to score at this time of the year, you can’t just wait for a shot. Sometimes you just got to get your nose dirty and find a way to score. He did that tonight.”

Boeser certainly got his nose dirty to score his goal on Thursday.

Back on the first unit power play, Boeser is no longer set up in one of the three prime shooting positions on the outside, which are now occupied by Pettersson, J.T. Miller, and Quinn Hughes. Playing in the middle of the ice with the man advantage, Boeser has to do more of the little things, which is exactly how he scored his goal.

After battling with Wild defenceman Ryan Suter in front of the net, Boeser was quick to recover a rebound and dove to put the puck in the back of the net.

Boeser will look to add to his point totals and help his team win again in Game 4 of the Stanley Cup Qualifier series, which is scheduled for Friday at 7:45 pm PT.