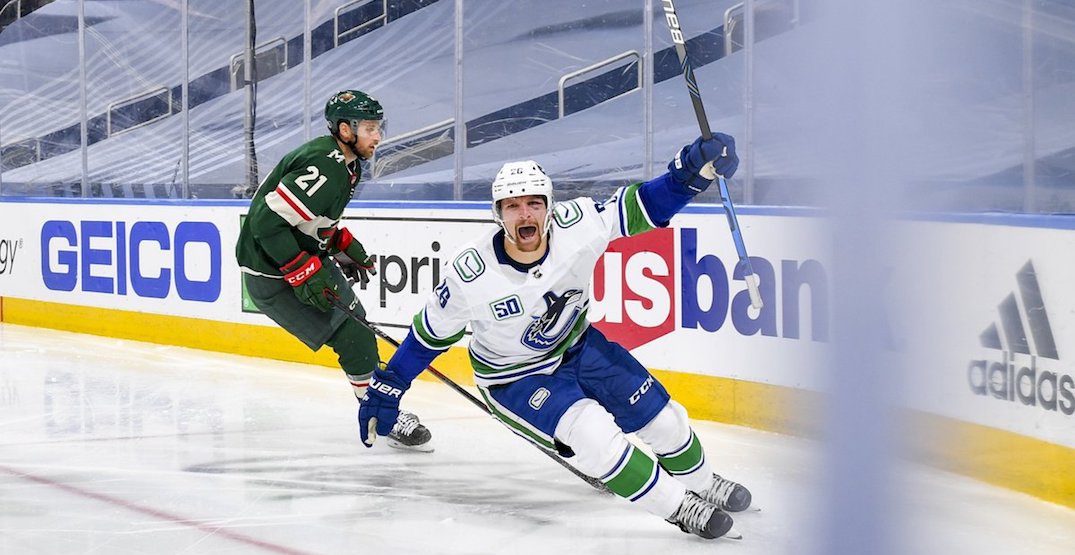 The Vancouver Canucks earned a gritty, hard-fought win over the Minnesota Wild in Game 3 this afternoon, winning 3-0. Jacob Markstrom earned the first playoff shutout of his career, while goals were scored by Brock Boeser, Antoine Roussel, and Elias Pettersson.

Neither team showed much discipline, in what has become a nasty series between these new rivals. Both teams had seven power plays, but the Canucks were the only ones to make theirs count, scoring twice with the man advantage. Boeser scored the game-winning goal midway through the second period, pouncing on a rebound after Wild goalie Alex Stalock couldn’t handle a patented Pettersson one-timer.

It stayed 1-0 until early in the third period, when Roussel took advantage of a Minnesota miscue, scoring on a breakaway with a backhand deke on Stalock for the insurance goal.

Third career playoff goal for @Rous_ant and the #Canucks lead 2-0 with 12:24 to play in the 3rd. pic.twitter.com/ZnUGDAvFJK

Pettersson scored his first-ever playoff goal in the final minute on the power play, converting on a two-on-one with Quinn Hughes to put the game away. Hughes had three assists in the game, in 22:47 of ice time.

Boeser’s game-winner was extra special for him, as it came against his hometown team on the anniversary of the death of his close friend, Ty Alyea. A Minnesota native, Boeser wears jersey No. 6 because of his friend.

Boeser pointed to the rafters after the goal.

Why is @BBoeser16 pointing to the heavens? Six years ago today he lost a very close friend, Ty Alyea, in a car accident. Boeser's goal was for him.

“It’s obviously a tough day for my friends and I,” said Boeser, who has never played a pro hockey game on this date before. “It’s crazy how fast time flies. To be able to get one for him, it’s something special. It’s an emotional day for sure. Tried to make the most of it today on the ice.”

After a frustrating opening game of the series on Sunday, the Canucks’ top players have come alive. Hughes has four points in the last two games, while Boeser and Pettersson have three points each. JT Miller and Bo Horvat have also been very good for Vancouver, with two points each, as has veteran defenceman Alex Edler, who has contributed two points of his own.

Not only did the Canucks shut out the Wild today, but they’ve now gone three games without giving up a five-on-five goal. Following a somewhat shaky first game on Sunday, Markstrom has improved with every minute in the series, and was dialled in Game 3. Still, the Swedish netminder didn’t need to be spectacular, which is a testament to the players in front of him, who blocked 22 shots this afternoon. The Canucks outshot the Wild 29-27.

Rookie Zack MacEwen drew into the series for the injured Micheal Ferland, and made an impact despite just five minutes of ice time. It was the penalty he drew on Wild forward Jordan Greenway that led to Boeser’s power play goal in the second period.

The Canucks now lead the best-of-five series 2-1 and can earn their spot in the next round with a win tomorrow in Game 4, which begins at 7:45 pm PT. Vancouver hasn’t won a postseason series since 2011, when Kevin Bieksa sent the Canucks to the Stanley Cup Final.