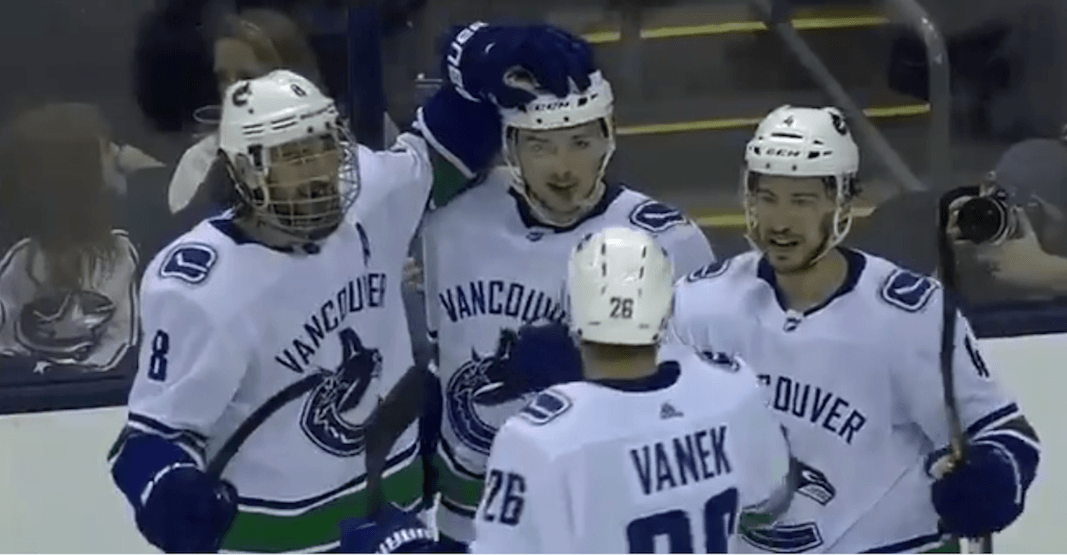 Would if I told you that Brendan Gaunce and Erik Gudbranson would both score in the same game?

What if I told you the Vancouver Canucks would score five goals without Brock Boeser’s name anywhere on the score sheet?

What if I told you they would comfortably beat the second-best team in the NHL’s toughest division?

The Canucks had a lacklustre start but bounced back with four goals in the second en route to a 5-2 victory over the Columbus Blue Jackets.

It’s the third career goal for Brendan Gaunce, but this one likely feels a lot better than the first two.

While his previous two goals came off his body, Gaunce scored off of his own shot for the first time in his career.

Broken stick – you didn’t think it would be completely normal did you?

Brendan Gaunce is physically incapable of scoring in an ordinary way. #Canucks

GAUNCE SCORED IS THIS A DAMN DREAM

Yes it was a magnificent snipe from Gaunce, but that play doesn’t happen without that incredible pass from Thomas Vanek.

Are we positive Vanek isn’t related to the Sedin twins?

Because this is a Sedin pass.

It was nice for Sven Baertschi to get a goal. He missed a month with a broken jaw, and had dried up offensively even before that. Friday’s goal was his first since November 21st, a stretch of 11 games without one.

With two assists on Friday, Vanek now has 31 points in 44 games with the Canucks. He’s on pace for just shy of 60 points, which should be attractive to some buyers at the trade deadline.

The Canucks may have won the game but their first period was terrible.

They were possibly a little deflated after another weak goal – a worrying trend for the Canucks this season.

Seth Jones has way too much time to shoot here – which makes it tough on Jacob Markstrom – but that’s a shot he needs to stop.

Luckily, it didn’t matter too much and Markstrom went on to stop 27 of 29 shots in the win.

Don’t look now, but the Sedin twins have been producing like star players again in the last few months.

Since November 21, a stretch of 24 games, here’s what the Sedins have done.

It’s partricularly impressive for Henrik , who hasn’t scored in that stretch but is averaging an assist-per-game. Since November 21, his 24 assists is second to only Claude Giroux in the entire NHL.

Was it Travis Green’s reduction in minutes early in the season that’s responsible? Hard to say, but they have been relied on more since the injury bug hit, and they have delivered.

It goes without saying, but the reworked power play is also a big part of the increase in offence.

This was just the Canucks’ third win in their last 16 games, and you have to think having Chris Tanev back was a big part of it.

Tanev will always be someone whose actual value is higher than market value. He doesn’t put up the points, but his work in the defensive zone is second-to-none.

You can see a massive improvement in the Canucks’ overall defensive play when he’s in the lineup. It’s why I’m not in favour of a Tanev trade. Sure it would bring in more future assets, but he’s just too valuable to this team.

Can we all just agree that we shouldn't trade Tanev? His peak trade value has passed, yet he can still help out this team and the youth movement in the coming years. Besides the tan man, our D worries the deal outta me.#canucks #KeepTheTanEvenInWinter

Down 1-0, this is an underrated play by Tanev, our SixPack Superstar. If Columbus scores here, it’s a completely different game.

It could’ve been easy for Tanev to sit this game out (and the one on Sunday) considering he just lost ‘six and a half’ teeth and needs surgery – and the Canucks have their bye week after that.

But Tanev is a warrior, and he couldn’t sit on the sidelines and keep watching his team lose anymore games.

He was in against the Blue Jackets with a face cage on and didn’t miss a beat. It’s easy to spot him out there with the cage, but that’s not the only thing that makes him easy to spot. He’s always in the right spot, making the right play.