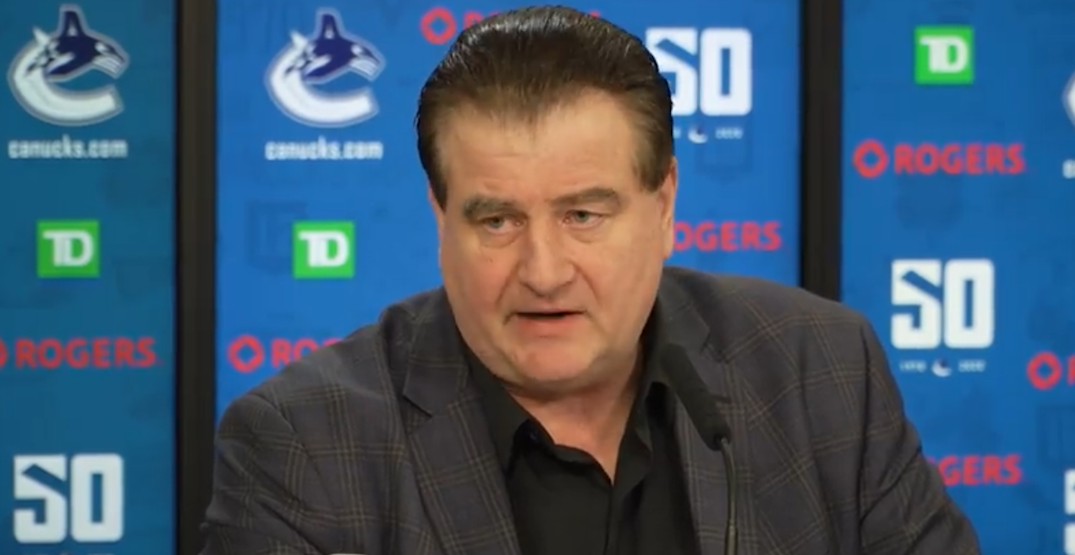 Vancouver Canucks general manager Jim Benning was made available to the media today, as usual on the eve of the NHL Draft.

That’s about all that’s normal about this week of course, as the draft will be held virtually on Tuesday and Wednesday, with the start of free agency in a flat cap world kicking off on Friday.

Benning kept his cards close to his chest for the most part, but did provide some insight on a big week ahead that will shape the future of the team.

Markstrom decision coming down to the final days

The biggest decision Benning has to make this week regards Jacob Markstrom, who can sign with any team he wants on Friday if he remains unsigned.

There’ll be a big lineup of teams throwing money at the Swedish netminder, who finished fourth in Vezina voting this season. That list is widely believed to include division rivals like the Calgary Flames and Edmonton Oilers.

Needless to say, it’s a huge decision, especially for a team without much cap flexibility and Thatcher Demko waiting in the wings. Add in the fact that next year’s Seattle Kraken expansion draft will only let them protect one goalie, and the decision only gets more difficult.

“I don’t comment on where we’re at in negotiations,” said Benning during a Zoom call with reporters today. “We still own his rights until Friday and we’re going to continue to keep trying to work with his agent, and we’ll see if there’s some sort of a place where we can find common ground.”

Benning said that re-signing Markstrom was his first choice, but the Canucks GM is clearly lining up his backup plan in case a deal can’t be made.

“We’ve spent a lot of time these last three weeks contacting all the other teams and trying to get a feel for where the marketplace is at. We still have Jacob Markstrom that we’re still talking about and trying to figure out. But if that’s something we can’t get done, then we’re going to have to look to the free agent market to try to fill that void, or through a trade.

“We’re keeping all of our options open.”

Robin Lehner, who is a year and a half younger than Markstrom, just signed a five-year contract worth $5 million per season, which includes a modified no-trade clause. That’s the best contract comparable for Markstrom.

Benning won’t get fined for tampering in his answer to the Oliver Ekman-Larsson trade rumour, saying that he “has discussions with lots of teams,” characterizing the talks as “due diligence.”

“I don’t know where it’s going to end up going, but those are just conversations that we have to do our due diligence.”

While fitting the Arizona Coyotes defenceman and his $8.25 million cap hit on his roster seems like an impossible task, given that Ekman-Larsson will reportedly only accept a trade to Vancouver or Boston means that the asking price could be low.

On the worry that bringing on another big contract could negatively affect the team in the future with Elias Pettersson and Quinn Hughes needing new deals next season, Benning says the team has looked at “a hundred different scenarios” with capologist Jonathan Wall constantly reviewing where the team projects to be in the future cap-wise.

There’s a possibility that could happen to Troy Stecher this year, depending on his marketability around the league and Benning’s ability to keep him.

Benning said they’ve sent out some qualifying offers already and have more to decide on before the deadline on Wednesday at 2 pm PT. He didn’t mention names.

The deadline to buy out a contract is on Thursday, with Sven Baertschi and Brandon Sutter among the potential candidates.

“We have a few more days to decide on that but we haven’t decided if we’re going to buy anybody out or not.”

Benning admitted that some “tough decisions” will have to be made, in part because of the flat salary cap. He remained optimistic though, pointing to young players coming up that will be cost-controlled.

“We’re in a good position because of the young players that we drafted, we developed, and we have coming through our system.”

Certainly, getting some more young players to push for spots sooner than expected would help out immensely. It remains to be seen if anyone is truly ready though.

Nils Hoglander might be a candidate, but that would be characterized as a surprise. Vasily Podkolzin is under contract for one more season in Russia.

Young defencemen “knocking on the door”

Benning was very high on some young defencemen, saying they’re “knocking on the door” and could push for a spot on the Canucks next season.

He not only said Olli Juolevi was “ready to play,” but he said the same thing about Jalen Chatfield too. Benning also said that Jack Rathbone could “push for a position” in training camp.

Leivo an option to re-sign

Josh Leivo hasn’t played since before Christmas, suffering a fractured kneecap that has kept him out ever since.

“He’s on the road to recovery. He’s been working out, skating every day. I talked to our doctors about him the other day. It looks like he’s not that far off to be cleared to play.

“He’s a guy that we’ve talked about, depending on what happens here through free agency, that we’d like to maybe sign and bring back.”

Preparing for the virtual draft

The draft does feel like an afterthought this season, and that’s not just because it’ll be held virtually without most of the bells and whistles.

The Canucks don’t have a draft pick in the first or second round. They don’t officially have a director of amateur scouting yet either, with Judd Brackett now in Minnesota.

Todd Harvey, who will be leading a lot of the amateur scouting decision-making, has flown in to town, Benning said.

The team will pick the “best player available,” which Benning and every other GM always seems to say, in rounds three and four. For some of the later round picks, Benning admitted that he could look instead to positional need. Unprompted, he mentioned the possibility of drafting a goalie, and talked about depth on the wing and on defence. So perhaps we can expect the team to add a goalie and some centres with their five picks.

As for the possibility that the team could add a higher draft pick than the 82nd selection?

Benning said it would be “hard” to trade into the first round, but left the door open about potentially adding a second-rounder.