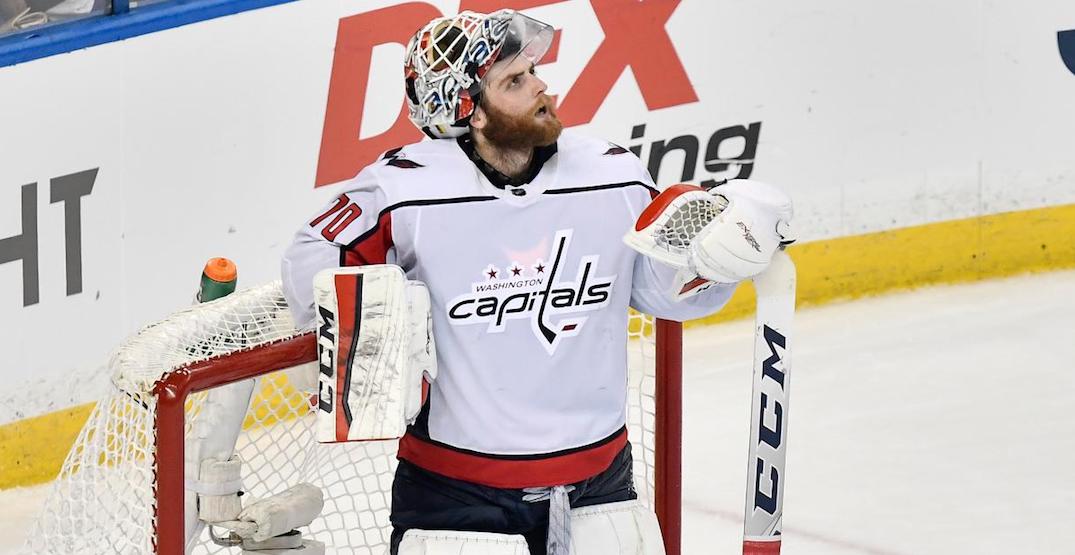 It should be a busy offseason of musical goaltenders this year, as an impressive list of established NHL netminders are pending unrestricted free agents.

A pair of Stanley Cup winning goalies are available this year, as are two goalies who finished top-six in Vezina Trophy voting this year.

With a flat salary cap and lost revenue due to the pandemic, it’ll be interesting to see how teams spend money when free agency opens on October 9. It’ll be especially interesting with goaltenders, given teams can only protect one goalie in the upcoming Seattle expansion draft, which will take place after the season.

Here’s a look at the top 10 pending unrestricted free agent goalies in the NHL this year.

Named the Canucks’ MVP in back-to-back seasons, Jacob Markstrom is coming off the finest campaign of his NHL career. The 6-foot-6 Swede has established himself as one of the best goalies in the league, finishing fourth in Vezina voting this year.

With Thatcher Demko in the fold and the ability to only protect one goalie in the expansion draft, the Canucks have an interesting decision on their hands.

Markstrom wants to stay and the Canucks want to keep him, but Vancouver is facing a salary cap crunch. Meanwhile, the vultures are reportedly circling, ready to pounce on Markstrom if he hits free agency.

Dealt to Vegas by the Blackhawks at the trade deadline, Robin Lehner supplanted Marc-Andre Fleury as the Golden Knights’ starter in the playoffs. There are rumours that the Golden Knights already have an agreement with him in place, which would surely mean the end of Fleury’s time in Vegas.

But if Lehner hits the open market, there’ll be no shortage of teams lining up for his services.

A Stanley Cup champion two years ago and a Vezina Trophy winner four years ago, Braden Holtby’s resume is impressive. But he’s also 31 years old and coming off the worst season of his career, in terms of save percentage (.897).

Capitals GM Brian MacLellan has told reporters that he expects Holtby to hit free agency, so it appears his time is up in Washington. A native of Lloydminster, Saskatchewan, perhaps he’s destined for a return to the prairies with the Calgary Flames?

Corey Crawford enjoyed a bounce-back year in Chicago, a place where he has won a pair of Stanley Cups. He’s getting up in age though, but the Blackhawks have reportedly offered him a one-year deal to stay.

If he wants more financial security in the form of a two or three-year deal, it may be time for him to move on.

A career-backup, Anton Khudobin is proving to be a pretty good No. 1 goalie in the playoffs, leading the Dallas Stars to the Stanley Cup Final with Ben Bishop lost to injury. Khudobin did play 30 games during the regular season and posted a league-best save percentage (minimum 20 games), so perhaps he’s for real.

He’s 34 and never been counted on as a true starting goalie, but maybe that changes this offseason.

After 10 years in Ottawa, the Senators have already announced that they won’t be re-signing Craig Anderson, so he’s assured of hitting the open market.

He’s long in the tooth, but if there’s still gas left in the tank, the 39-year-old could be a good short term solution for a team. His numbers aren’t overly impressive in the last three seasons, but that has to be viewed in the context of the dreadful teams he played behind.

After losing his status as a No. 1 goalie in 2018-19, Cam Talbot won the starter’s job for the Calgary Flames in the playoffs and looked good, posting a .924 save percentage in the postseason.

After a one-year show-me deal, he’s likely looking to cash in with a team as a bonafide No. 1 goalie again. Expect him to end up in a tandem situation though.

After one season in Edmonton, Mike Smith is a free agent again, after an interesting season with the Oilers. Smith split the net with Mikko Koskinen during the regular season but was benched after a poor performance in the postseason. He’s got experience, but age isn’t on his side.

A bit of unheralded goalie during his NHL career, Thomas Greiss has thrived playing behind Barry Trotz’s system with the New York Islanders. That will raise a red flag with potential suitors about his ability to play in another system, given that every goalie seems to thrive under Trotz.

Probably best suited as a backup goalie at this stage of his career, Brian Elliott had a winning record with the Flyers last season, but posted a save percentage under .900 for the first time in nine years.

Here’s the best of the rest:

Aaron Dell: A capable backup for a team that needs one.

Ryan Miller: At 40 years old, he hasn’t retired yet and he always puts up solid numbers.