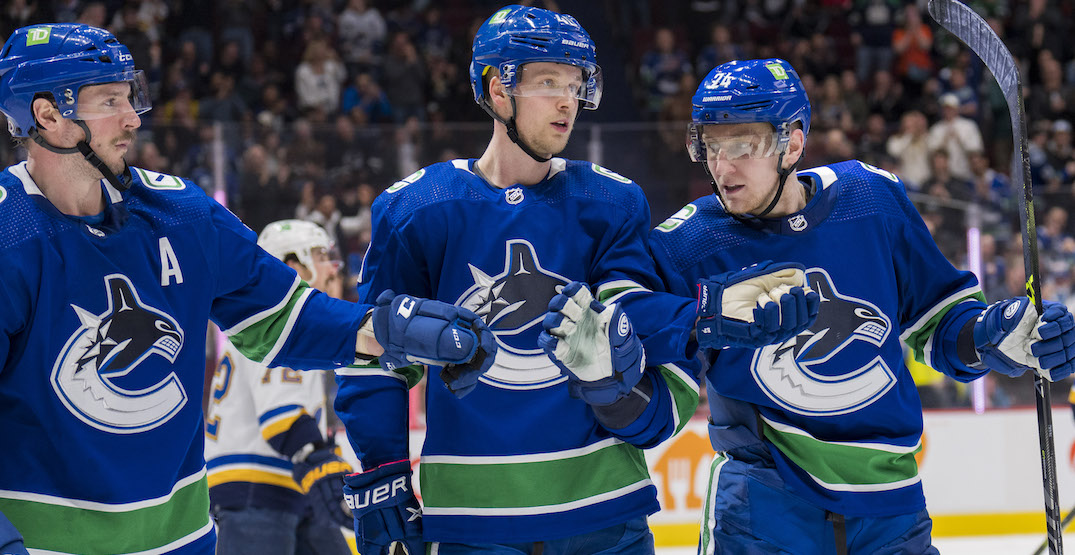 Ever since the NHL returned from the 2004-05 lockout, parity has increased on a yearly basis thanks to the salary cap.

At least, that was the case until this season.

Parity is now moving in the other direction, highlighted by the lack of playoff races towards the regular season’s conclusion.

No team wants to be stuck in the “mushy middle” where they aren’t good enough for the playoffs, nor are they bad enough to contend for a lottery pick.

You can take a look at the bottom of the NHL standings for evidence of this. Everyone might think they can make the playoffs in September, but how many of these teams were realistically gunning for a postseason berth this season? 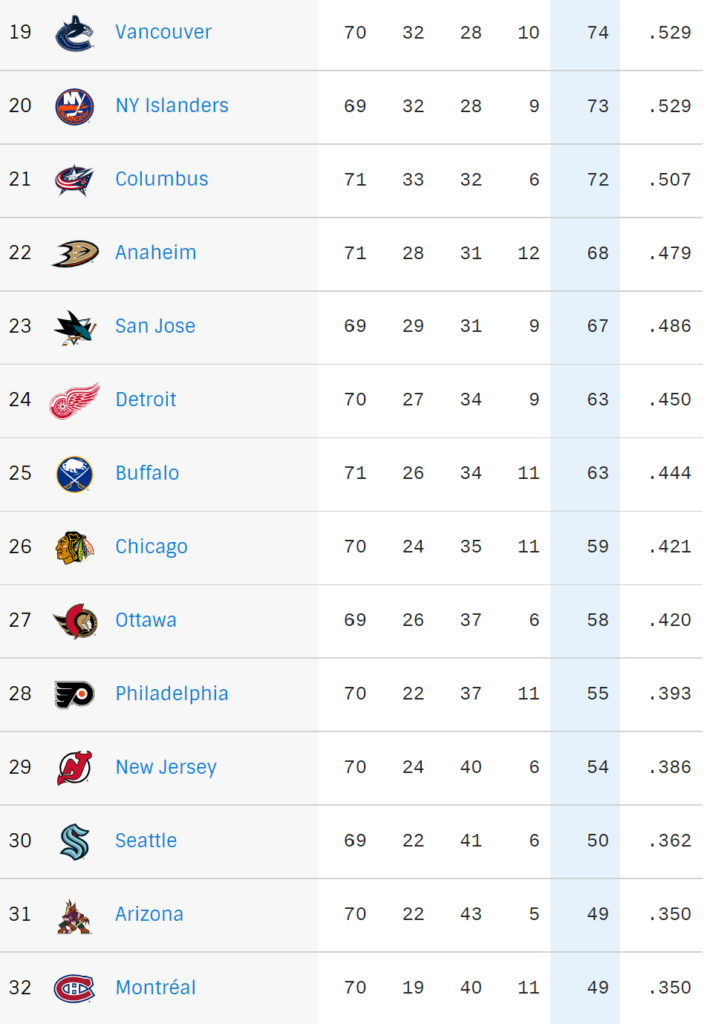 The Philadelphia Flyers and Chicago Blackhawks are the largest catastrophes of this group. Both teams made moves this season with an eye on the playoffs, but will instead likely land a top-10 draft pick.

Meanwhile, teams like the New York Islanders, Winnipeg Jets, and Vancouver Canucks had their sights set on the playoffs, but are instead stuck in the dreaded mushy middle.

What NHL contenders are doing well

Dom Luszczyszyn from The Athletic wrote about this recently. He denotes that Stanley Cup contending teams generally win in the regular season 60% of the time.

This season, there are eight.

There were nine when Luszczyszyn posted that article, although the Calgary Flames have fallen below the mark with losses in three of their last four.

Still, it’s clear that there are more true Stanley Cup contenders now than there have been in a long time.

So, what can the Canucks learn from these teams so that they can enter that upper echelon?

Here are four commonalities between these contending teams.

1. Get star players on bargain contracts

This might apply to every contending team, aside from Toronto (even then, you could make the argument that Auston Matthews has become a bargain).

The two top teams in the league right now, Colorado and Florida, are perfect examples of this. Colorado’s Nathan Mackinnon makes his $6.3 million for this season and next. Florida has two of the league’s best players, Jonathan Huberdeau and Aleksander Barkov, earning $5.9 million this season.

Boston might be the best example, where none of Patrice Bergeron, David Pastrnak, or Brad Marchand make over $7 million.

This is an important lesson for the Canucks with Bo Horvat, Brock Boeser, J.T. Miller, and Elias Pettersson all up for new deals by 2024.

Even the best teams have some, but at least they’re able to limit the number of bad contracts.

Every single bad deal brings you one step closer to the NHL’s basement or worse, the mushy middle.

In Tampa Bay, their most inefficient contract is probably Ryan McDonagh’s. His $6.75 million per season contract is a high number, but he’s still a good shutdown defender who logs big minutes.

Based on his defensive impact, his cap hit makes more sense than both Oliver Ekman-Larsson and Tyler Myers. Here’s what Luszczyszyn pegs their true value based on their underlying performance:

If the Canucks want to be competitive next season, they need to try to find a way to get out of one of those contracts.

Florida has done a masterful job of this during their run to the top of the standings. Carter Verhaeghe, Mason Marchment, and Anthony Duclair are all perfect examples.

Tampa Bay sent some shock through the hockey world when they traded away two first-round picks for little-known forward Brandon Hagel.

One of the primary reasons they did this? Hagel makes $1.5 million for two seasons following this one.

Efficient contracts are golden tickets in this league, especially when they’re up-and-coming 23-year-old forwards like Hagel.

For the Canucks, Miller ($5.25M) and Thatcher Demko ($5M) are the team poster boys for efficient contracts.

4. Have a cap hierarchy

While all of the current contenders do a decent job of this, there’s arguably no team who’s nailed it better than Tampa Bay.

They’ve had to have a strict internal cap hierarchy based on the fact that, well, they’re always capped out. 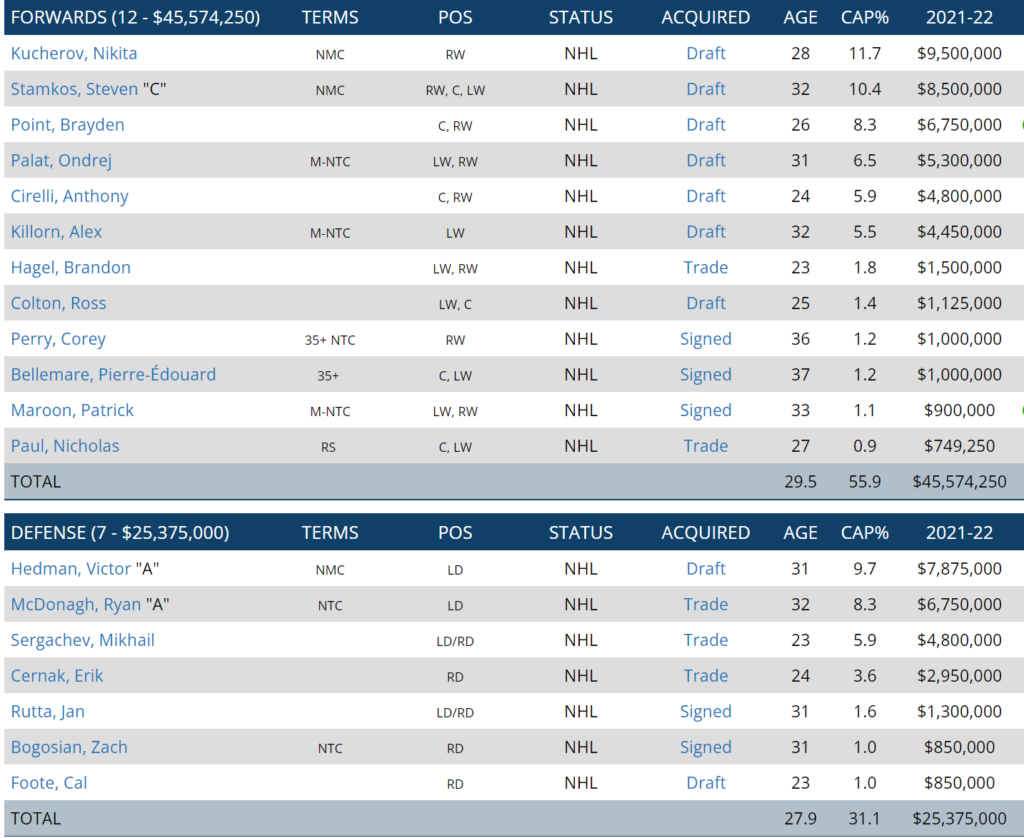 There’s a clear gap cap-wise between Tampa’s top-six and bottom-six forwards. This lines up with how much ice time their forwards receive on a nightly basis. Ondrej Palat’s 16:47 average time on ice per game (ATOI) is lowest among the top-six forwards. Pierre-Edouard Bellemare’s 14:03 ATOI is highest among the bottom six.

On defence, there’s a clear top-four with Victor Hedman, McDonagh, Mikhail Sergachev, and Erik Cernak. The first three players mentioned there all skate at least 22:36 per night, which lines up well with how much they make.

The Canucks have a similar structure, although it’s clearly not as efficient as Tampa Bay’s. 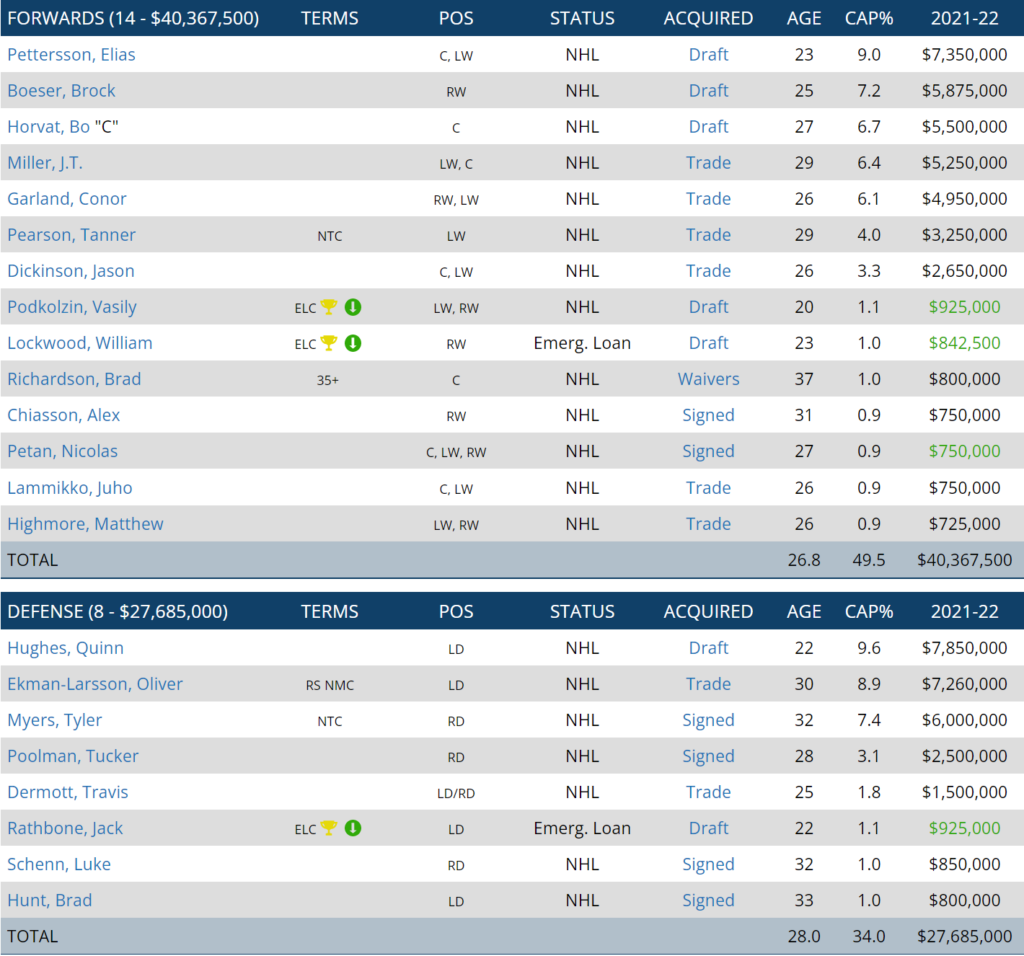 The Canucks have lacked an internal cap for a long-time, even if it looks slightly better this season thanks to the absence of Loui Eriksson.

Regardless, this club still has a lot of work to do before reaching contender status.

They’ll likely have to employ these four strategies in the next two years if they truly want to contend during Pettersson and Hughes’s prime.