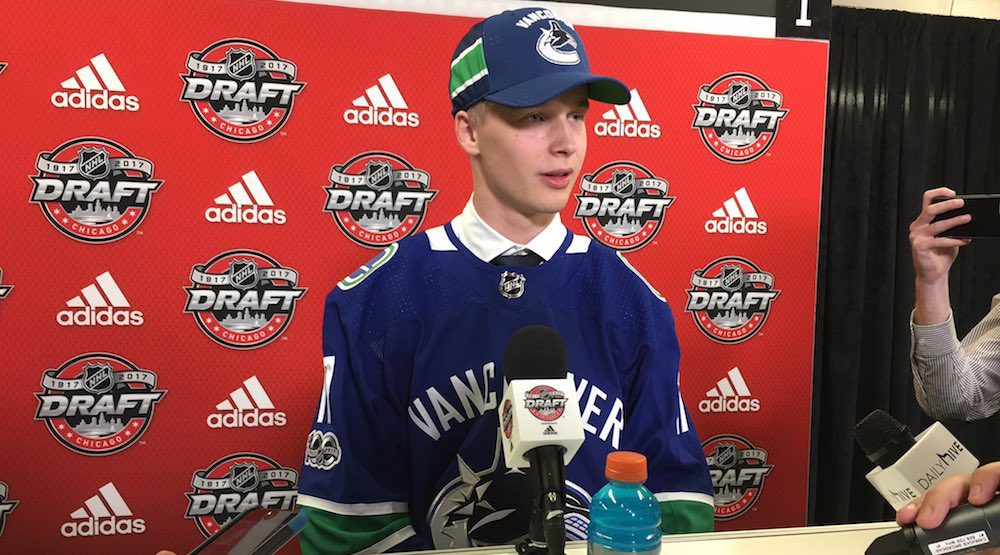 Like the past, the future includes a playmaking Swedish centre.

GM Jim Benning selected centre Elias Pettersson with the fifth pick in the first round at the 2017 NHL Draft in Chicago on Friday.

He may not be the second coming of Henrik Sedin, but he could take his spot on the Canucks’ top line one day.

The first two picks of the 2017 edition of the draft went as expected, with Nico Hischier and Nolan Patrick being selected 1-2. From there two defencemen – Miro Heiskanen and Cale Makar – were selected by Dallas and Colorado, respectively.

That left Timothy Liljegren as the lone option if Vancouver wanted a defenceman, and many more options to pick a centre.

Benning, who stated his desire for a playmaking centre or a power play defenceman before the draft chose the 18-year-old Swedish centre. The Canucks passed on some North American centres that received more press leading up to the draft in Cody Glass, Gabriel Vilardi, and Casey Mittelstadt, to take Pettersson.

“They were the team that showed the most interest in me,” Pettersson said minutes after being selected.

Pettersson says he patterns his game after Washington Capitals centre Nicklas Backstrom, though he admits he’s got a lot of work to do before he gets to that level.

“I think I create a lot of scoring chances, for me and for my teammates,” Pettersson added. “I’m a playmaker. I like to pass more than shoot it.”

A crafty and agile two-way forward, Pettersson is consistently productive in all three zones. As he gets stronger, he’ll become even more physical and aggressive than he is now, and his creativity could definitely elevate his game to dominant levels. He can be described as a tenacious, jack-of-all-trades kind of player; he is well versed in all the important aspects of his own game. His speed and top-end acceleration continue to improve game by game, and his hard-nosedness shows through in his dogged pursuit of puck control. Elias Pettersson is a complete hockey player with exceptional hockey sense who brings intellect and youthful exuberance to a game that feeds on his kind of exciting athleticism.

Pettersson played on the same line as Canucks prospect Jonathan Dahlen, who he described as his best friend, for Timra IK in the second tier of pro hockey in Sweden last season. With 40 points (19-21-40) in 43 games, Pettersson finished second in scoring on his team, right behind Dahlen.

Apart from impressive stats against men in Sweden, Pettersson has good bloodlines. His brother Emil was drafted by the Nashville Predators in the sixth round back in 2013.

Here’s the reaction of the Pettersson family, captured by Emil:

“I need to become stronger and faster, I’m aware of that, and I’ll be working on that this summer.”