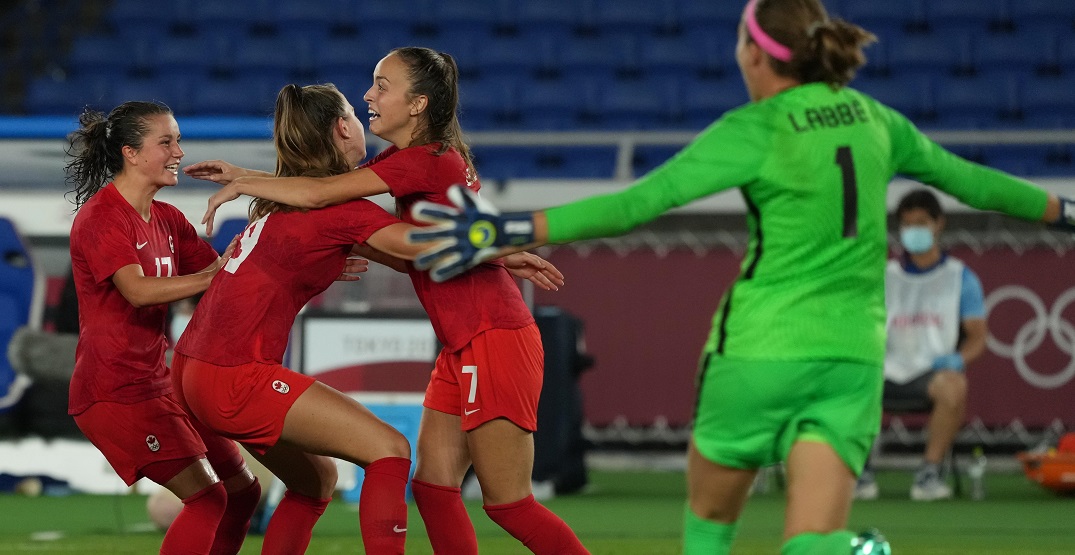 You can’t fault Canadians for getting a bit emotional after the women’s soccer team came through with an epic win in the Olympic gold medal match in Tokyo.

Topping Sweden 3-2 in one of the craziest penalty shootouts you’ll ever see, Canadians everywhere were euphoric for a historic Olympic championship.

A late penalty scored by Jessie Fleming tied things up at one goal apiece, with extra time solving nothing in the women’s soccer final.

Canadian Bayern Munich star, whose partner Jordyn Huitema was among Canada’s gold medallists, posted a video of his postgame reaction.

Was watching on my phone… absolutely amazing!!! Congratulations, #TeamCanada!
🥇🇨🇦🙌

Could not be happier for this group. @sincy12 – created much from nothing. @stephlabbe1 brick wall. The rest-❤️ of champions. Enjoy Canada long time in the making. So great!!! https://t.co/AyrLSh4p81

Canadian swimmer Maggie Mac Neil, who won the gold medal in the 100m butterfly event in Tokyo, gave some love to Jessie Fleming, who shares a hometown of London, Ontario.

Just to be funny, I thought I’d record my reaction if #TeamCanada won and I was going to make a joke…instead I just started bawling. I always cry watching people celebrate. Congratulations to these incredible players and thanks for bringing Canada together. I think we needed it. pic.twitter.com/4sTrRcohgy

They’re not called Can’tada for a reason

Julia Grosso a fitting hero to score the winning penalty. Her introduction completely changed the game. Played as a true 8, so comfortable with both feet and the angles of her passes, playing forward allowed Canada to gain momentum in the second half & bring doubt to Sweden.

Even the Toronto Blue Jays got in on the fun.

In three years, Canada will get a chance to defend the throne in Paris at the 2024 Summer Games.

But for now, it’s party time.