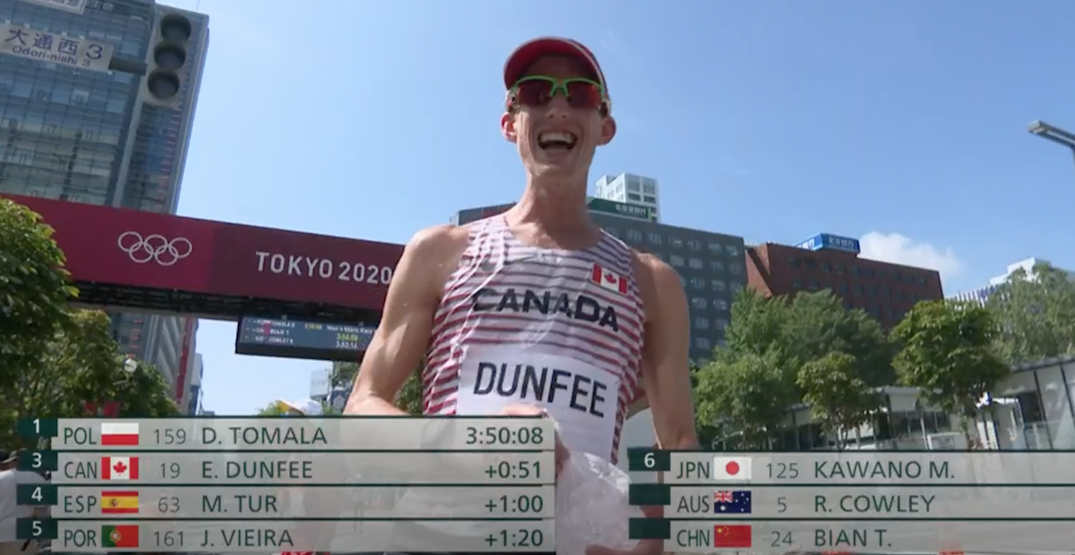 This time, it’s for good.

Dunfee’s late push in the 50-kilometre race walk was good enough for the Canadian to win bronze in the Tokyo Olympics. With sweltering hot conditions in Sapporo, the Richmond, BC native passed Spain’s Marc Tur late in the race to move into third place.

Dunfee was elated as he crossed the finish line.

A late charge for BRONZE 🇨🇦🥉

Canada's Evan Dunfee captures bronze with a late push to the finish in the men's 50km race walk pic.twitter.com/TLxbUrbj1y

His post-race reaction says it ALL 🙌 pic.twitter.com/gFu5nYn3Il

“I didn’t know if my body was going to give it to me that last kilometre. I kept asking for it,” Dunfee said in a CBC television interview after the race. “I thought about my parents, I thought about my grandparents, my nana… I felt them with me every step of the way there, my friends and family back home watching. Like I felt them pushing me that last kilometre… I’m so pumped.”

The podium finish is sweet redemption for Dunfee, who was briefly awarded bronze at the 2016 Olympics in Rio after Japanese race walker Hirooki Arai was disqualified for bumping him. After an appeal, Arai was reinstated, and Dunfee was dropped back down to fourth position.

Dunfee was widely admired for the incredible sportsmanship he displayed through the ordeal, as he had an option to appeal the decision, but declined.

“I had to ask myself, if I got this medal, would I be proud of it and be able to sleep at night?” Dunfee said in 2016. “I came to the decision that I was so proud of my race and that I couldn’t honestly take away from him what he did. I’m very happy with how the process has gone.”

Safe to say, Dunfee can be proud of the medal he won today.

"I felt them with me every step of the way"❤️

Canada's Evan Dunfee reflects on a gruelling race that saw him earn bronze 🥉 in the men's 50km race walk at #Tokyo2020 pic.twitter.com/JOsS9aXbVb