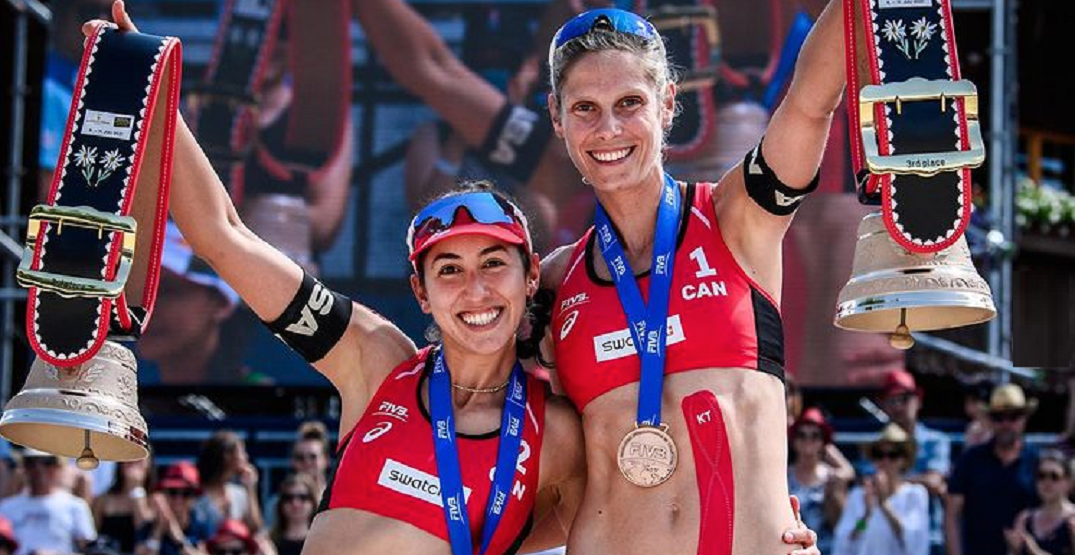 Canadian beach volleyball athletes Melissa Humanas-Paredes and Sarah Pavan headed out to Tokyo on Thursday in preparation for the upcoming Olympics.

Flying out from Switzerland fresh off winning a bronze medal at the FIVB World Tour event in Gstaad, Pavan said the pair hopes for a fast recovery from any potential jet lag.

“We usually adjust pretty quick,” Pavan said in an interview with Daily Hive before leaving. “I’m happy we’re already sort of halfway there, being in Europe. I think the bigger adjustment will be to the heat and humidity.”

Both athletes are aiming high. The pair won the gold medal at the 2019 beach volleyball world championships and are among the favourites of the 24-team field in Japan. But they’re hoping to stay grounded and enjoy each day in Tokyo as much as possible.

“I think the process gets pushed aside,” Humanas-Paredes said. “You don’t want to look back on the experience and not really have lived it, so I think that is probably top of mind for me.”

Pavan competed at the Rio 2016 Olympics with partner Heather Bansley, bowing out in the quarterfinals. Humanas-Paredes, meanwhile, is making her Olympic debut. Bansley will be competing in Tokyo alongside Brandie Wilkerson.

Both Pavan, 32, and Humanas-Paredes, 28, had similar exposure to volleyball, catching the Games on TV as small children.

For Humanas-Paredes, she had an added family connection: her father Hernán Humaña played for the Chilean national team and coached Canada to a bronze medal in men’s volleyball at the 1996 Atlanta Olympics.

“At a very young age, the Olympic dream and the Olympic journey was kind of around me,” Humanas-Paredes said.

Pavan says the duo is looking to serve as an inspiration for those who are in a position similar to what they were as youngsters.

“I think that this whole experience is just a really great platform for us to be great female role models for young girls in Canada and around the world to kind of springboard the sport of beach volleyball,” Pavan said.

The pair embraces the Olympic format that sees the competition spread out throughout nearly the entire games, with the potential for up to seven matches if they win.

As for what goes into their pre-match prep, the pair says they typically arrive at the venue and get in the zone about ninety minutes before the competition.

“We have a very strict kind of like sunscreen regimen that we’re very into because it’s very important with our job to protect from the sun,” Humanas-Paredes said. “That’s also kind of therapeutic in a way and really starts focusing you.”

The pair’s partnership with Kraft Peanut Butter’s “Your Cheers, Their Ears” campaign allows the opportunity for Canadian fans to record messages that will be relayed directly to the duo prior to competing through special headphones.

“We can listen to these messages right before our game to kind of get us in the zone and feel the support of  Canadians that we won’t really have without having anybody in the stands,” Humanas-Paredes said.

But it isn’t just Canadian fans keeping the two going amidst an Olympics that is slated to be played without fans. A particular Canadian sitcom has also been a favourite of the duo as they travel across the world competing.

“We’re going to have to find a way to kill some time in our rooms,” Humanas-Paredes said. “We’ll have to play some board games, watch some Netflix, right Sarah?”

“We do love Workin’ Moms,” Humanas-Paredes confirmed. “We support that show a lot.”

The pair get their Pool A round-robin games started with a matchup against the Katja Stam – Reija Schoon duo from the Netherlands on July 24.  They will also face off against teams from Switzerland and Germany as they look to land a spot in the Round of 16.

“Fortunately, we have played all of these teams when they’ve been at their best,” Pavan said. “We know what we’re getting. And we’re going to be very prepared when we face them.”