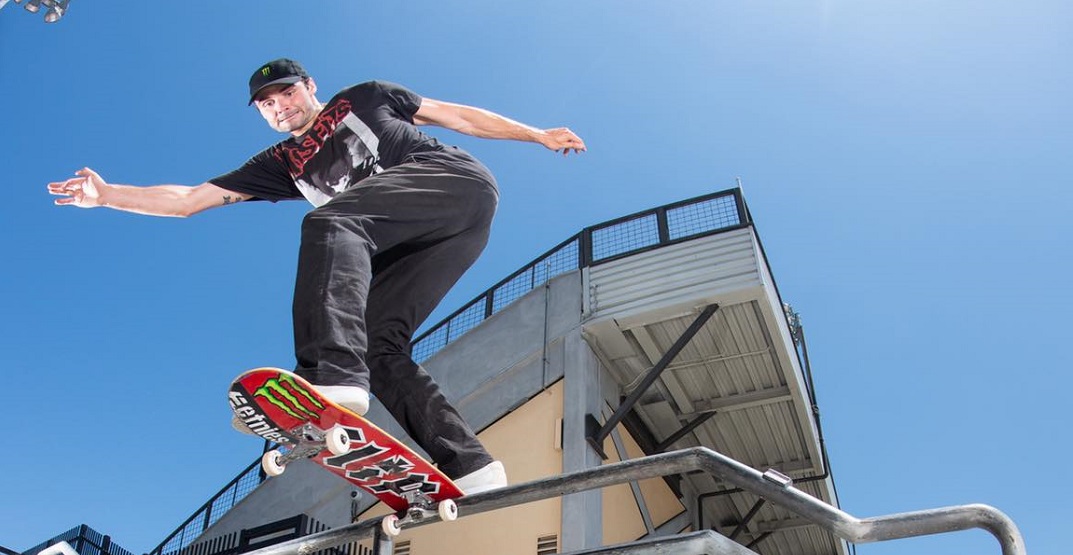 “I just knew I was gonna figure this out.”

The internal monologue of Canadian skateboarder Matt Berger at the age of “eight or nine” was one of hope that one day he’d have a career doing what he loved.

“I remember thinking… I have to do this,” Berger told Daily Hive in an interview.

It’s safe to say he’s figured it out.

Berger’s biggest stage yet comes at next month’s Tokyo Olympics, where the 27-year-old will be one of three athletes representing Canada in the skateboarding competition, alongside Andy Anderson and Micky Papa. Berger and Papa will be competing in the street event, with Anderson wearing the maple leaf in the park event.

Berger’s childhood is about what you’d expect from a skater growing up in the 1990s: reading magazines, playing Tony Hawk’s Pro Skater video games, and hitting up his local skatepark in Kamloops after being gifted a board by his grandmother at Christmas when he was four.

After honing his skills on his parents’ backyard concrete patio, competitions and spending hours every day at the park became the norm for the BC native.

“I genuinely was just so obsessed and passionate from such a young age,” Berger said. “I watched all these videos of other pros travelling around the world skateboarding and making a living. I didn’t care about anything else. [I thought] if I just keep going, it’s almost like a naïve belief that you’re going to have a career.”

“My teachers were constantly trying to talk to my parents to get me on Ritalin,” Berger said. “I couldn’t pay attention to anything in class. But as soon as it came down to skateboarding, I was locked in, I was hyper focused, and I skated for hours.”

That internal drive has pushed Berger to his current number-one rank among Canadian skaters in street, and a 10th-place ranking internationally to qualify him for the Olympics.

Olympic dreams, though, aren’t what most, or really, any, skaters typically have in mind. The event is making its debut at this year’s Olympics after a few decades of lobbying from various groups.

“The Olympics was never on my radar, because that was never an option. It never was a path of success to me,” Berger said.

Success is never a guaranteed thing for any athlete, especially a Canadian skater growing up in a city dealing with winter temperatures for the better part of four or five months each year.

Berger detailed the various issues he’s dealt with, including a pair of knee injuries, a lack of indoor parks in Canada, and a poorly constructed park in Kamloops that he described as “one of the worst in the world” prior to its renovation in the mid 2000s.

But after entering his first competition in Kamloops at the age of eight, it’s been full speed ahead ever since.

“I was so infatuated with skateboarding and so passionate about it and I just wanted to try everything,” he added.

The formation of the organizing body Canada Skateboard in 2016 has helped athletes like Berger to achieve their dreams. Berger said Canada Skateboard’s biggest influence has been helping with funding and medical treatments in a way that was previously usually left for skaters to figure out on their own.

“Hopefully people see the value in what we do,” Berger said. “Then, in turn, we get more support to do what we do for ourselves and for future generations.”

Cheerios’ Cheer cards initiative, of which Berger is a part, is one way for fans to support a unique Olympic Games without international spectators.

“The reason why I have a career is because of fans, it’s because of everyone behind what I do,” Berger said. “We’re still going to give it our ‘A’ game whether or not the fans are there. It’s not like every day on the board at the skate park we have a bunch of fans waiting for us. Hopefully the fans are able to support in different ways.”

Canadian supporters are encouraged to show support through sending postcards to Olympic athletes like Berger that can be cut out of Cheerios cereal boxes.

As for his daily schedule over the next few weeks as he preps for Tokyo, it’s going to be a lot of what Berger’s already used to doing: hitting up the skatepark, doing some yoga to relax his muscles, and spending time at the beach with his friends.

“It really is just rinse and repeat,” Berger said. “It’ll be weekly working on different things going into it, and making sure we’re feeling the best we can on our board going into Tokyo.”