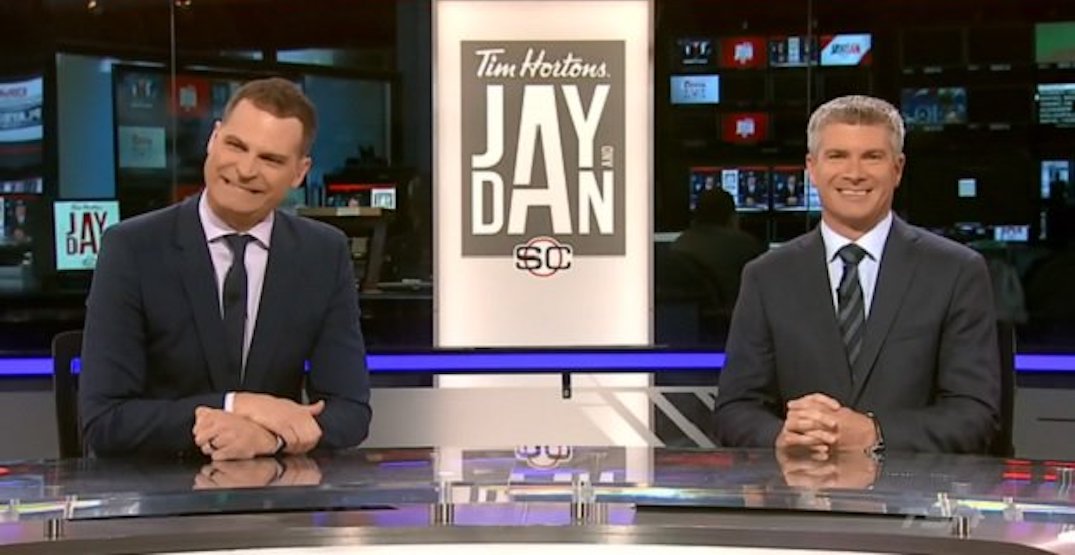 The Canadian media conglomerate let go more than 200 employees this past week, including sportscaster Dan O’Toole, co-host of the popular TSN highlights show SportsCentre with Jay and Dan.

O’Toole and longtime running mate Jay Onrait returned to Canada and TSN in 2017, after four years with Fox Sports 1 in the United States.

Other well-known TSN sportscasters included in the recent layoffs include longtime Ottawa reporter Brent Wallace, and SportsCentre anchor Natasha Staniszewski according to one report.

“We have made some changes at TSN as we streamline the organization,” a Bell Media spokesperson told Daily Hive. “The changes have affected some on-air personalities, who depart with our sincere thanks for their contributions to the network and the sports community.”

These layoffs have left sports fans very unhappy, and they took to social media to express their frustration.

Hey @BellMediaPR "Ya blew it"

Sincere thanks LOL. 18 years together and they couldn’t even give them a last show. So disappointed in TSN. @Bell @BellMediaPR

It’s refreshing to know TV execs North of the Border make colossally bad decisions that viewers hate as often as the ones down here.

Breaking up Jay & Dan is a huge mistake…

Jay and Dan was always my fav show. 😢 https://t.co/OdTEFxJdTY

Absolutely blasphemous that TSN got rid of Dan O'Toole #JanAndDan was absolute go to in the morning. https://t.co/wvDQJCMm61

I’ll sure miss #JayAndDan. Perhaps my favourite thing that has ever happened to me is when Jay read a tweet I had just tweeted live on the show while I was watching. There’s no other show where this kind of magic could happen. Thank you to @notontvotoole for many years of laughs. pic.twitter.com/Lfqc8V1jh5

Dan O’Toole being let go from TSN is an absolute garbage decision on Bell Media’s take. If Videotron wasn’t the [email protected] major cable network in Quebec, I’d be changing to elsewhere. Dan and Jay revolutionized sports highlights. What a shame…

Just heard Dan O’Toole, Toolsey is gone from @TSN_Sports. What a damn shame.

WTF – Dan O'Toole gone, Brent Wallace gone, Natasha Staniszewski apparently also gone but don't know that for sure yet – what the hell's going on at TSN? Or perhaps more specifically, what the hell is Bell doing to TSN?

Why would TSN get rid of Dan O'Toole and Natasha Staniszewski? Do they hate talent?

With all of the problems in Canada, Jay and Dan weren't one of them. https://t.co/qaeLQLLCMf

Jay and Dan are no more, and in a few months Tim and Sid will be no more. I suggest a new power duo of Tim and Jay!!! https://t.co/bXi3vFVR6i