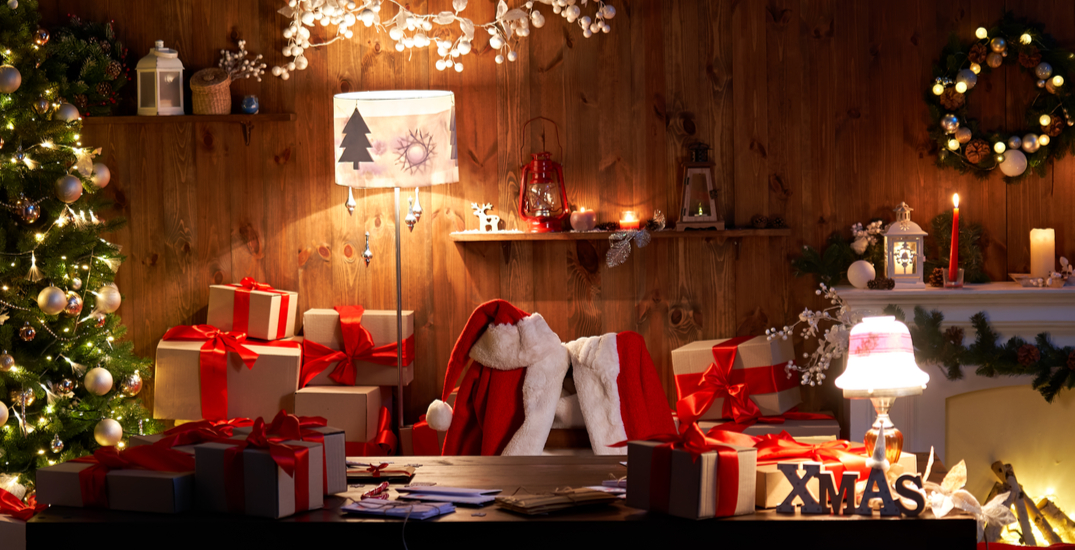 The COVID-19 pandemic has led to supply chain issues, delays, and shortages across the country, but one unexpected shortage is a lack of Santas.

Gone are the days of huge office Christmas parties, in-person Santa Claus parades, and long, winding line-ups to see the man in red. The COVID-19 pandemic put a swift end to those traditions. Office parties were put on hold, and Santa Claus parades and visits went virtual.

In 2021, while more people are vaccinated and some people move towards more pre-pandemic lifestyles, physical distancing and other public health measures are putting a strain on the available Santas.

One national Santa company said that they don’t have enough Santas to keep up with demand, and not just anyone can step into the role to make up for it.

Rozmin Watson, who is the North Pole operations manager at Hire A Santa, told Daily Hive that not just anyone can put on the red suit and white beard and become a Santa. Hire A Santa is a Vancouver-based company with Santas available from coast-to-coast.

Watson said that they hire out Santas for a number of events, including corporate and private events and your typical mall Santa. But as the holiday season ramps up, and the night when Santa shimmies down the chimney approaches, she’s finding it more difficult to find enough Santas.

“It’s harder to get Santas this year because those who were thinking about retiring last year, they now have retired,” she said.

That’s not the only reason, she said. Watson said that some Santas who opted for virtual visits last year preferred the flexibility they allowed. Others who had surgeries delayed due to the pandemic are now getting a chance to get their treatments. Others worry about being around so many people before seeing their own family for the holidays. Not to mention that those who take on this important role are often older and more at risk of COVID-19. Many of the children that want to visit Santa have not yet had a chance to get vaccinated.

“It’s not like you can just get up in the morning and say, ‘Okay, I’ll be Santa next week.’ It doesn’t work like that. I find this year there’s a real shortage for those reasons,” said Watson.

Another strain on the Santa supply chain is that physical distancing rules mean holiday parties are split up and spread out, Watson said. More people are having smaller, private parties. Prior to the pandemic, everyone would head to the office for the holiday party — now, not so much.

Like much of Canada’s population, the Santa population is also aging, which puts an additional strain on the system. One Santa who may have been able to work a 10-hour day five years ago will likely put in half that time now.

“I personally haven’t seen anybody under the age of 50 who applied. They’ve all been about 55 and up,” said Watson. “We’re open to hiring younger ones, older ones, experienced and non-experienced.”

She added that the new Santas almost always come back to the role. And they’re always open to recruiting new Santas.

“It’s very rare that they don’t stick around,” she said.

As for why people step into such an important role, she said it’s always for good reasons.

“They apply for very good reasons. Maybe their grandfather or father has been a Santa and they want to continue the legacy,” she said. “Other times, they’ve had such good experiences in the past with their own children and grandkids.”

In the pre-COVID holiday season, Hire A Santa would usually have about 150 Santas. This year, Watson said they have just over 100. She’s already looking ahead and planning for the 2022 holiday season.

“It’s a year-round job,” she said. “The retailers usually contact us in February, March.”

Then there’s the recruiting, paperwork, and North Pole workshop. The North Pole Santa School is usually held in September when the Santas gather to talk about, well, being Santa.

“We have a school once a year. We gather together and discuss the new trends, the new toys. We show them the different quality of suits and why their suit is so important. We talk about beards and beard-care and hygiene and maintenance of their suits,” said Watson.

So, if you’ve ever thought about being a Santa, maybe 2022 is your chance to don the beard (preferably real), step into the red suit, and put on the iconic glasses.

Keep the Santa traditions alive — you may find it’s the role of a lifetime!