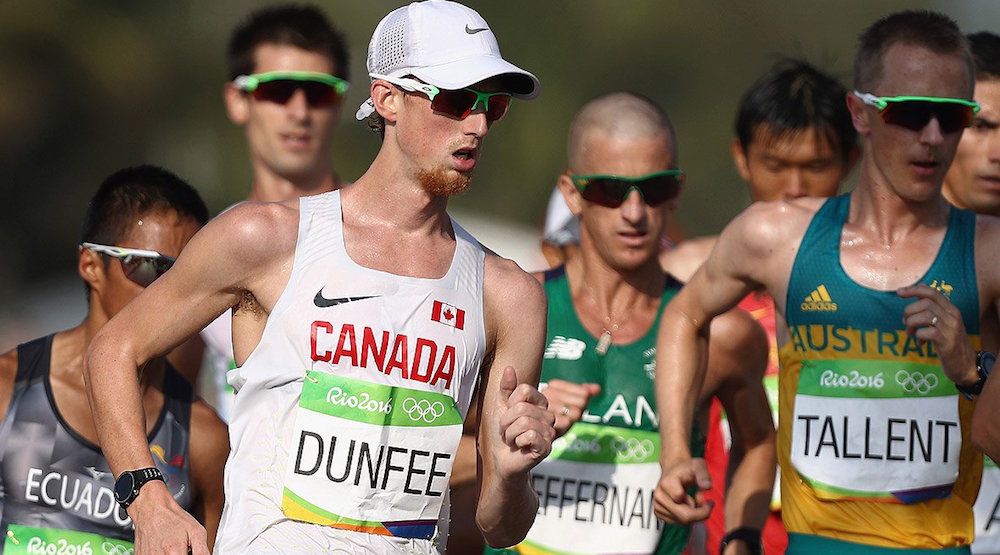 Having given it all he had, the Olympian from Richmond, BC was disappointed and exhausted, and collapsed at the finish line.

Dunfee was in bronze medal position until he was bumped by a Hirooki Arai from Japan. Arai overtook Dunfee soon after and held on for third place.

ICYMI | Another look at what happened in the final stretch of the race walk. @AthleticsCanada has filed a protest. https://t.co/m8vL9Cc2MZ

Of course, the 50-kilometre race walk is not a contact sport, and Canada filed a protest.

We have just heard back on the protest… #bronze for @EvanDunfee. We expect a counter protest from the Japanese.

The protest was successful and the race walker from Richmond, BC will be awarded the bronze medal.

*Update: Japan has won an appeal, which strips Dunfee of the bronze medal. Dunfee officially finishes in fourth place.

**Update: Dunfee has issued a statement (quote courtesy of CBC):

“I had the option to appeal the CAS and to me, I couldn’t have honestly and appropriately gone a step further. He was in the same world of hurt (as me). He brushed my shoulder. I’m an aggressive walker and maybe I leaned into him.

When I finally watched the video, I couldn’t say to myself that it was (intentional) or malicious. I had to ask myself, if I got this medal, would I be proud of it and be able to sleep at night?

And I came to the decision that I was so proud of my race and that I couldn’t honestly take away from him what he did. I’m very happy with how the process has gone.”

What a class act.