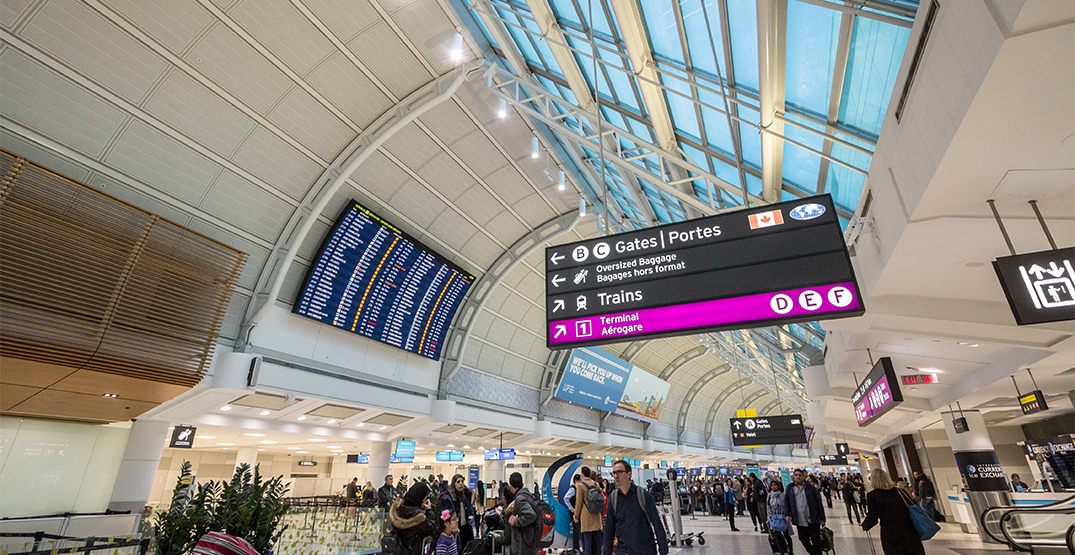 Wait times at Toronto Pearson have been making headlines for days, and now business leaders are calling on the federal government for a fix.

Passengers travelling through Pearson have been asked to arrive at least three hours early for international flights in light of the delays. It’s not just passengers catching departing flights that are facing delays, either. Passengers arriving at Pearson have had to wait for long periods on planes on the tarmac, so they don’t flood customs.

Business leaders in Toronto said that these delays are giving travellers to Toronto, and Canada as a whole, a bad first impression.

“My concern is that this poor first impression will keep people from returning to Canada,” said Edwin Frizzell, regional vice president of Accor Central Canada & General Manager of Fairmont Royal York at AccorHotels, said at a press conference on Thursday.

They spoke about the lengthy delays at Toronto Pearson that have been making headlines since April.

“Pearson is Canada’s largest airport. Over the past week alone, more than 100,000 people, 50% of travellers moving through Toronto Pearson suffered extensive delays,” Jan De Silva, president and CEO of Toronto Region Board of Trade, said at the press conference.

The groups are calling on the federal government to further ease COVID-19 restrictions and testing at airports in order to speed up the process and decrease delays. They worry that these constant delays will deter people from travelling to Canada.

“The recent travel experience will have a detrimental and lasting impact and how many perceive travelling to Toronto and Canada on the international stage,” Christopher Bloore, president and CEO of the Tourism Industry Association of Ontario, said at the press conference.

Bloore said that COVID-19 measures at airports could be lifted, as the City and province have been using wastewater to monitor for COVID-19. He said that lifting these measures would speed up wait times in all airports in Canada.

According to Bloore, these processes have increased CBSA processing from 30 seconds pre-pandemic to two minutes. The business leaders are asking the feds to drop these public health measures and to move random testing off-site.

Despite warning departing passengers to arrive early, and that there may be delays, arriving passengers are often caught off guard when they end up stuck on a tarmac.

A Daily Hive staff member travelled from the US to Toronto Pearson on Wednesday and waited on the tarmac for at least an hour. The flight crew had little information to pass on to passengers.

Soo.. how’s @TorontoPearson wait times lately? I’m flying YOW > YYZ > TPA but only have a 1 hour layover to go through security and customs. Should land in YYZ around 6:40 am. Getting mighty stressed but this is how it was booked via @AirCanada #pearsonairport #aircanada

“It’s disappointing. They should’ve predicted the amount of passengers and flights. This has been going on for two years,” a passenger who wanted to remain anonymous said.

Other passengers worried about family and friends waiting outside of the airport to pick them up, unable to give them an idea of when they might make it through customs.

“At least I have data, I can play on my phone a little, but I do feel bad for my family who’s waiting in the cellphone parking lot to pick me up because I know I’m holding them up. I’m glad that somebody posted on TikTok. Last week I saw a video saying get to the airport four hours early, so I got up at 4 am and did it,” Katarina Mogus said.

She added that she felt bad for the flight crew, who had little information and kept apologizing to passengers even though the delay wasn’t their fault.

The president and CEO of the Association of Canadian Travel Agencies (ACTA) said that they’ve heard that some passengers are cancelling or deferring their trips through Toronto Pearson due to the long wait times.

“Pearson Airport has already made their needs clear, and today we are urging the federal government to act on them. It’s time for the government to address resource shortages and remove legacy COVID-19 policies that are only slowing us down,”  Wendy Paradis said.