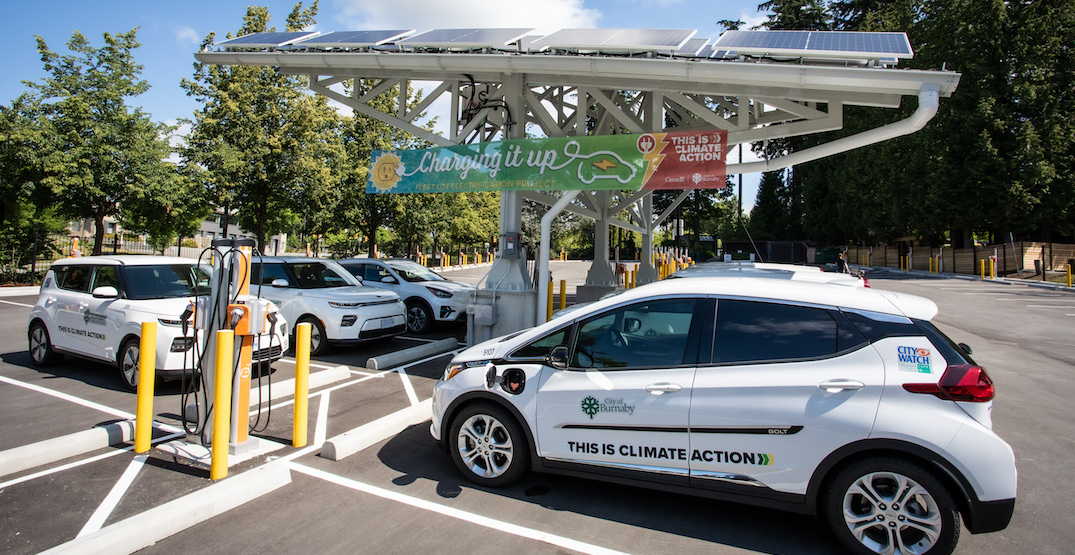 A total of 100 electric vehicle chargers have been added, along with the installation of a large-scale solar panel canopy. This will generate emissions-free energy, and help the municipal government reach its strategy of eliminating emissions from all city operations by 2040.

It is billed by the City of Burnaby as one of the largest designated electric-battery vehicle parking lots in the country.

In particular, the new charging stations at City Hall allow the City of Burnaby to accelerate its transition to an electric-battery vehicle fleet.

The municipal government has already installed 28 charging stations at its Still Creek Work yards and over the next three years, it has plans to install 200 more charging stations, mostly for its city fleet vehicles.

For the latest project at City Hall, the total cost reached over $1.1 million, with the federal government contributing $500,000 and the municipal government covering $650,000.

“This is an exciting project for the City of Burnaby as we strive to activate our community to more rapid action on climate change,” said Burnaby Mayor Mike Hurley in a statement.

“We are grateful for the federal government’s significant contribution to this project, as it will not only act as a catalyst for our fleet electrification but also as a source of inspiration for our community to act fast to achieve carbon neutrality.”

The solar panel scheme over City Hall’s parking lots is modelled after the ground-mounted solar panels on shade structures at the nearby BCIT Burnaby campus, known as the “Energy Oasis.” This infrastructure also supplies the electricity needs for electric-battery vehicle charging stations beneath the canopies at BCIT.