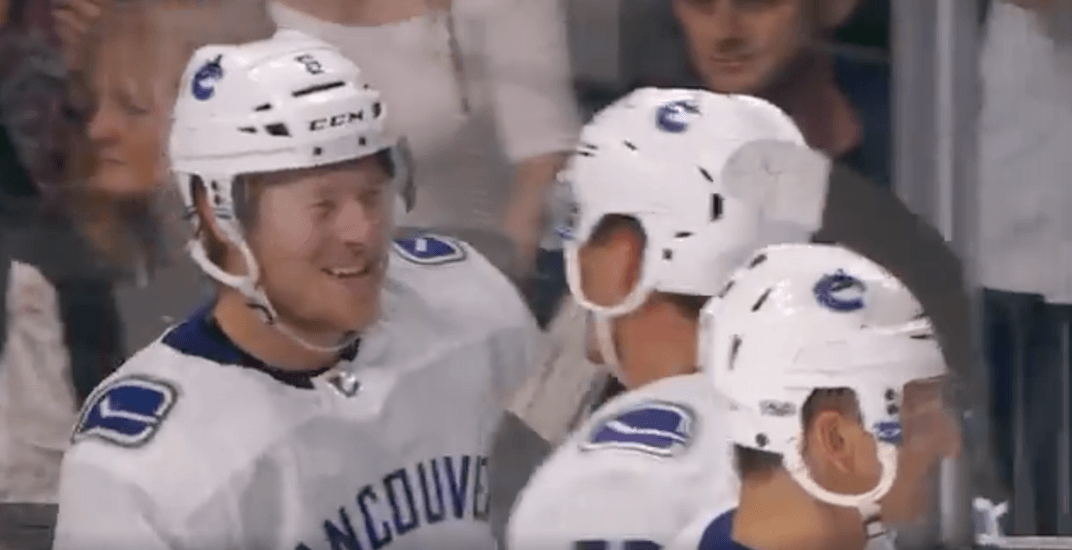 This will make Canucks fans smile.

Expectations for the Canucks are low this season. Nobody expects this to be a playoff team and many expect Vancouver to finish near the bottom of the standings.

So excitement level isn’t high, with the exception of the Canucks’ young players.

No player has the attention of the fanbase more than Brock Boeser these days. The 20-year-old is not guaranteed a spot on the opening night roster, but if his play in Saturday night’s preseason opener in Los Angeles is any indication, he won’t be boarding a plane to Utica anytime soon.

Boeser finished the game with a goal and an assist, with three shots in 16:27 of ice time, helping the Canucks beat the Kings 4-3 in overtime.

His goal in OT was a beauty. Boeser picked up the puck in his own end, went end-to-end, and ripped a shot past Kings goalie Darcy Kuemper.

It was a big-league shot by Boeser, who shot the puck in stride, ripping it through Kings defenceman Oscar Fantenberg’s legs and past the goalie.

Fantenberg might want reconsider backing up to his own hash marks next time he has a guy like Boeser streaking in on him.

Boeser also picked up an assist on Sven Baertschi’s tying goal late in the third period. The other two goals were scored by Markus Granlund and Jake Virtanen.

Virtanen had a good first outing, delivering a few big bodychecks. He led the Canucks with five hits.

Other standouts included Jacob Markstrom, who stopped all 19 shots he faced before giving way to Anders Nilsson who played the second half of the game. New Canucks defenceman Michael Del Zotto led all skaters for both teams with a whopping 26:54 of ice time.

Newcomer Alexander Burmistrov was also very noticeable for Vancouver, despite not lighting up the stats sheet. He played 21:56 for the Canucks on a line with Boeser and Baertschi.

Also with a huge performance? Sportsnet’s John Garrett, who followed up eating a pepperoni pizza with ketchup on Friday night with nachos and ketchup for breakfast on Saturday.

Quick follow up: late breakfast consisting of nacho chips, pump cheese and ketchup. No I did not take part. pic.twitter.com/IIVh6fnO5N

The Canucks will play their first home game of the preseason on Sunday (2 pm) against the Vegas Golden Knights, with a mostly prospect-filled lineup. Most of the veterans will board a plane for Shanghai on Sunday, in advance of a pair of preseason games in China.