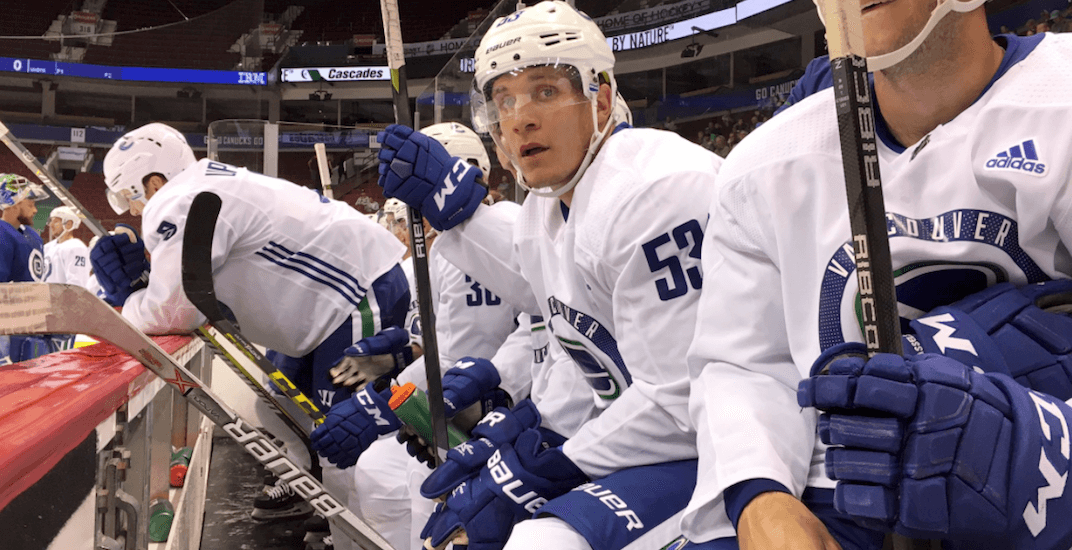 And in more ways than one.

Expectations aren’t high this year either for the Vancouver Canucks, who have missed the playoffs in three out of four seasons.

But for better or worse, this season will be different.

The Canucks have a new coach, and a bushelful of new players. They’ll have a new starting goalie, too.

Heck, they’ve even got flashy new practice jerseys that has some fans dreaming of a new jersey concept.

They’re also in the midst of the most competitive training camp in years with a number of roster spots in question. As the team prepares for their first preseason game on Saturday, here are seven training camp questions facing the team:

1. What kind of a difference does Travis Green make?

This question has a few levels to it.

First-year coach Travis Green made a splash on the first day of training camp. He signalled his arrival with a very vocal, high-intensity practice. Some players referred to the practice – which included a bag skate – as the toughest they’d experienced in years.

He also has new ideas, and a new system.

“He’s big on systems. He’s been showing us video every day of what he wants to do,” Bo Horvat told Daily Hive on Thursday.

Horvat said there are changes to the way the Canucks will play this system under a new coach.

“He likes to have speed, he likes moving your feet and getting things going through the neutral zone.”

2. What do they do with Virtanen?

Moving your feet through the neutral zone and playing a speed game would seem to play into Jake Virtanen’s skillset.

But will that be in Vancouver or Utica?

Because of his size and speed, Virtanen could conceivably play on a fourth line. That’s usually a bad idea for the development of a young player, but maybe not considering the depth Vancouver has.

But they’re trying to develop a difference-making power forward, not a depth energy guy.

Green could elect to use skilled players on his fourth line, which wouldn’t be a hinderance for the third-year pro.

On the other hand, it’s been a while since Virtanen really excelled at any level. There’s something to be said about sending him back to Utica – even if he has a good preseason – and let him get on a roll.

Green appears ready to give his young players a real shot to be difference-makers.

Nikolay Goldobin started training camp on a line with the Sedins, before moving to play with Horvat on Friday.

Does he find chemistry with any of them?

How does newcomer Michael Del Zotto fit with Erik Gudbranson, who he has been paired with in practice?

With so many options, a little bit of preseason chemistry could go far into deciding who makes the team, and what role they play.

4. Who wins the battle for open forward spots?

Nine veteran Canucks forwards appear to have a spot on the team locked up.

More than 10 other players have a realistic shot at earning one of four forward spots, and that doesn’t include Brendan Gaunce, who is out until November with an injury.

It’s a mix of old and young looking for a spot.

Brock Boeser is the most promising youngster on the cusp, but he’s not a lock. Goldobin and Virtanen also have youth on their side.

Alexander Burmistrov has been getting good wingers to play with in training camp so far – Thomas Vanek and Loui Eriksson to start, Sven Baertschi and Boeser on Friday – so he’s being given a serious look.

Michael Chaput and Jayson Megna are around too.

Philip Holm is a wild card for the Canucks.

The Swedish defenceman has never played in North America, but at age 25, he could be ready to play in the NHL.

Is he good enough?

We’ll see, though he looked capable in Thursday’s scrimmage. How composed he is when the games start for real will help reveal if he’s a legitimate NHL blueliner.

6. Who fills out the rest of the defence?

After that, it’s wide open.

Holm, Patrick Wiercioch, and Alex Biega would appear to have the inside track, but there’s only two open spots on the back end. Olli Juolevi, who has flown remarkably under the radar given he was a fifth overall draft pick a year ago, has a lot to prove.

Lastly, the story between the pipes will be an interesting one.

Jacob Markstrom and Anders Nilsson will make the team, we know that much.

"I'm excited to work with Anders. It will be healthy competition and Demko and Bachman are knocking on the door. Can't wait." – @j_markstrom

But who is the team’s No. 1 goalie? Who’s given the first and best opportunity to succeed?

He has two unproven 27-year-old goaltenders to choose from.

The best decision is to keep the position a meritocracy, not piling on any undue pressure onto either player.

The Canucks will play in Los Angeles on Saturday at 2 pm, at which point some players will travel to China for a pair of additional games against the Kings in Shanghai and Beijing. The rest of the team will stay in North America, as the Canucks play a home game against the Vegas Golden Knights on Sunday, also at 2 pm.