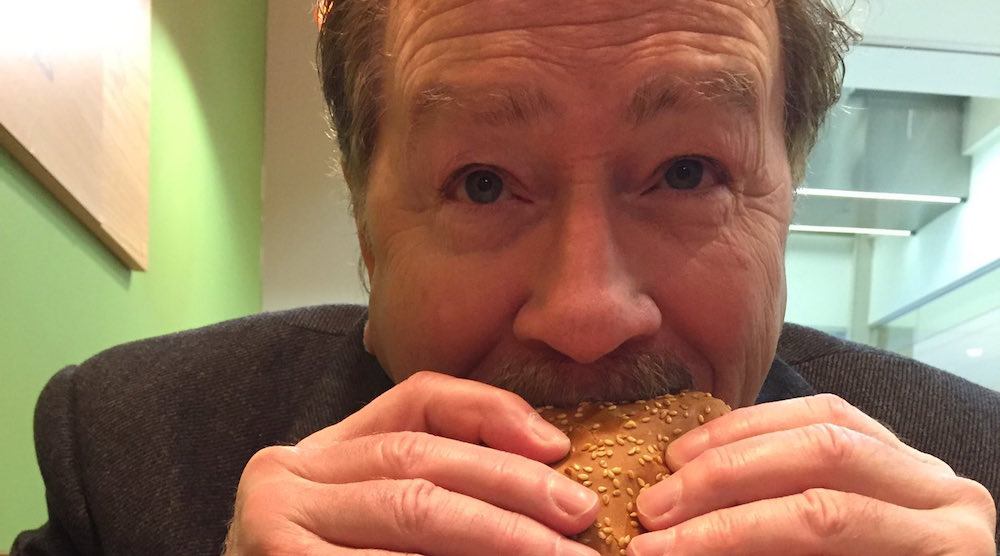 There are few former players or broadcasters that are more lovable characters than John Garrett.

The former NHL player and longtime colour commentator is famous for commenting on Safeway Score and Win products during Canucks broadcasts on Sportsnet. Personally, I love it. I could listen to him go on about what he puts Cheez Whiz on all day.

Some of the other Garrett stories are the stuff of legend.

He was going to win the NHL All-Star MVP (and a car) in 1983 until Wayne Gretzky stole it from him (figuratively, of course) in the third period.

He once tried to fight Mario Lemieux.

On a terrible Canucks team in 1984-85, he finished the season with a 6.49 goals against average. That earned him the nickname “Lotto.”

There are some great Garrett stories as a broadcaster too.

Former play-by-play partner Chris Cuthbert has told the tale that Garrett didn’t use utensils for a single meal during a three-week run in the Stanley Cup playoffs together.

That leads me to the main reason for this article: Garrett’s eating habits on the road.

If you’re a Canucks fan on Twitter, you follow Sportsnet’s Dan Murphy and you know what I’m about to show you next.

Burgers. So many burgers.

Murph has an ongoing series of John Garrett pictures that he graces the internet with. Nearly all of them involve the former Canucks goalie with his face in a hamburger.

“I can let you in on one little secret, I’m never there,” Murphy told Daily Hive. “Those pictures are always taken by John Shorthouse and sent to me because he doesn’t have Twitter.”

“I do not take part in the daily burger lunch,” he continued. “It’s always Shorthouse and Garrett. They’re the burger fiends.”

As a burger enthusiast myself, I get it. In-N-Out Burger in LA? Sign me up.

I think I could go toe to toe with Garrett and Shorthouse. For a few days, anyway. Because these guys are machines.

“If I ate like Shortie (John Shorthouse) for the past 20 years on the road, I would be 500 pounds. It’s amazing the genes those two have.”

On the road, Murph estimates that 75% of Garrett and Shorthouse lunches involve some kind of burger. He says that’s a conservative estimate.

“If Garrett wants a healthy lunch – I’m sometimes there with him – a healthy lunch for John is if we go to Subway. He gets the same thing every time. On Italian bread, he gets ham and cheese, double cheese, extra mayo. No veggies.”

While Shorthouse goes healthier at dinner, often with a salad, Garrett powers on.

“Even at dinner, most of the time we bow to Cheech’s pressure and we’ll go eat somewhere that’s a sports bar or something so he can not have to use utensils and I can usually find something as well.”

Here they are, the best John Garrett eating a burger on the road photos for the 2016-17 season:

Again, fries (+ ketchup) sacrificed for lent…so that's a burger with a side of burger. All in the name of religion. 🍔🍔🙏 pic.twitter.com/y4RLi9wwMo

Frisco Thickburger on Texas toast. Pretty sure he mean it. pic.twitter.com/wgddSw8G6w

Yes that is genuine excitement. pic.twitter.com/3cPCGUtrXS

Snowing in Calgary but that didn't stop Cheech from visiting the little girl with the red curl.
🍔🍟 pic.twitter.com/nsX16vuovK

Another day, another burger. What could go wrong? Well, just in case. 🍔 🚒 pic.twitter.com/mRoQfmv47S

Okay #canucks fans, your team can't score. But it's important to remember what really matters in life. Perspective. #king pic.twitter.com/LXTeq9aIz0

These are hard times for Garrett, as he’s given up fries and ketchup for 40 days during lent.

When you give up fries and ketchup for religion it's means onion rings and ranch dip. The sacrifice is real. #lent pic.twitter.com/3T00VXidTH

What does Garrett eat at games, you ask?

When the salad bar doesn't cut it….nachos and pump cheese always has your back. pic.twitter.com/oHHI0Gtsfq

How do you celebrate your last trip to the Joe? Nachos with fake cheese sauce. pic.twitter.com/YH6tJVkyg0

Christmas is done so it's time to watch the waistline now. That said, perogies after one. With sour cream and 🐷 pic.twitter.com/XOedYZ1o6t

John Garrett, I salute you, for you are truly the real Burger King.