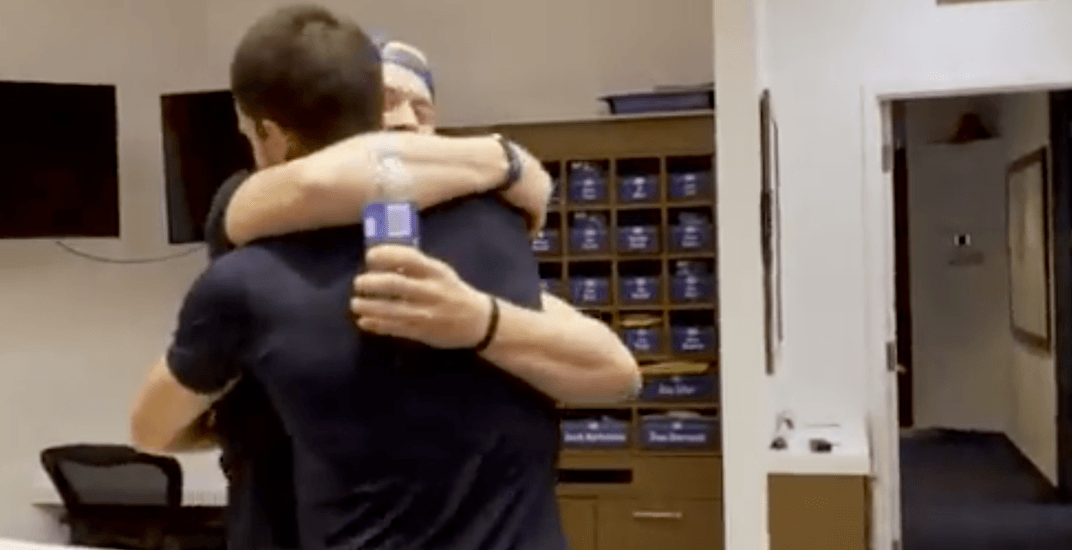 Brock Boeser stepped onto the ice at Rogers Arena for the first time this season on Wednesday.

Having finally put pen to paper on a new three-year, $17.625 million contract, Boeser jumped on a flight to Vancouver yesterday, meeting up with some of his Canucks teammates after their 4-2 preseason win over the Edmonton Oilers.

On Thursday, Boeser reunited with his old buddy Bo Horvat in the players lounge, and the Canucks’ video team caught the heartwarming moment.

“Horvat!” Boeser said, as he gave Bo a big hug.

The behind-the-scenes content gave fans a rare chance to see the two star players interact, with Boeser revealing that he hasn’t given Horvat a wedding present yet — nearly two months after Bo wedded his longtime girlfriend Holly.

“You didn’t want to pay for the shipping eh?” Horvat joked.

Boeser also revealed that he’s lost some weight over the offseason — clocking in at 203 pounds, which is down from 208, his official weight listed on NHL.com.

Canucks fans, as you might imagine, loved every second of this video.

#bromance… until that promised bagstake!

Why do I keep watching this?

Makes me so happy

There’s the captain with the prince

Boeser met with the media after practice, reiterating how happy he was to be back with his teammates after going all summer and four days of training camp without a contract.

On signing a bridge deal instead of a long term contract, Boeser didn’t seem bothered.

“I love Vancouver. My plan isn’t to just to play three years and get out of here. My plan is to play here as long as I can. I love the city, I love the fans, I love the organization.”

While a contract stalemate can weigh heavily on the mind of a player, it’s clear that Brock had more important things to worry about. His father Duke is battling cancer, though appears to be doing better of late.

The 22-year-old Burnsville, Minnesota native fought back tears as he told reporters “that was a tough couple of months there.”

Duke spent four weeks in the intensive care unit, but his health has improved since then.

“Even just spending that extra week [with my dad], he just started eating this past week, came really alert. Obviously he still has some delirium and hallucinations and stuff.”

“That meant a lot to me to be there and that’s kind of what kept me sane going through this whole process, just being able to go see him each and every day. Be there to support him. Just seeing him these last couple of days, it really let me relax a bit to see how well he’s doing and how well he’s coming along. On that side of things, it was really nice.”