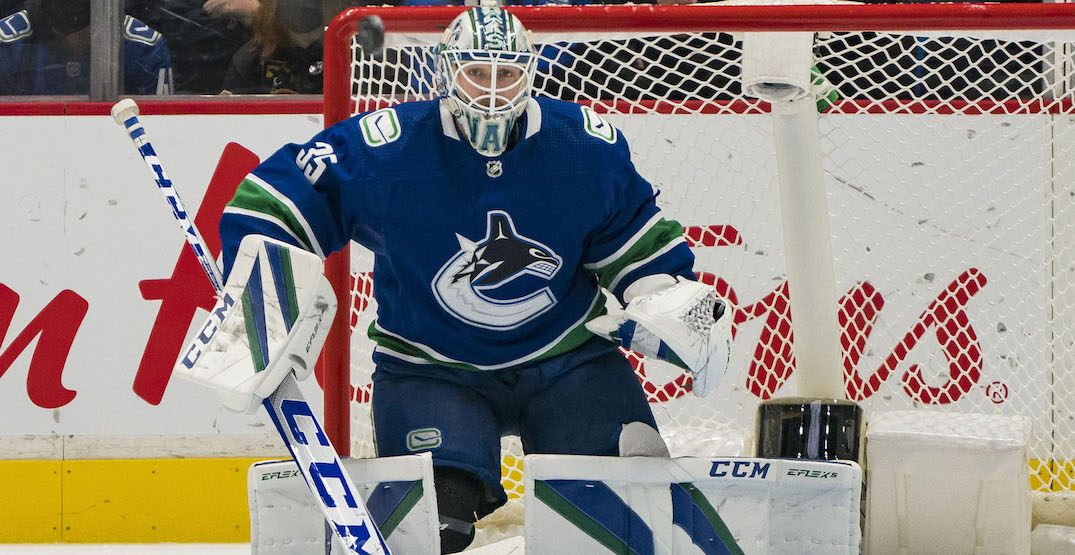 Did the Vancouver Canucks rely too much on Thatcher Demko last season?

When Canucks president of hockey operations Jim Rutherford was asked to assess his team’s season, he surprised many with how brutally honest he was willing to be.

“We’d like to see our team play a more structured game, and not depend on our goalie as much,” said Rutherford, and that was after just the first question of the press conference.

That was a not insignificant critique of Bruce Boudreau, which combined with Rutherford’s reluctance to commit to his head coach beyond next season, fuelled speculation about their relationship.

And while Boudreau has since agreed to return next season, and maintains there are no hard feelings between him and management, he doesn’t exactly agree in full with Rutherford’s assessment of last season.

“It’s a point of contention,” Boudreau said in an interview with Sportsnet 650’s Satiar Shah and Dan Riccio. “I mean, I agree that we rely on the goalie, but every team relies on their goalie. We had some deficiencies in other places, but a goalie would come up big, and every team needs a good goalie to win.

“I don’t care who you are. You can be Colorado, [if] they don’t get good goaltending from Kuemper, they’re not winning. So I sort of poo-poo the assessment that your goalie kept you in it and everything… We’re lucky to have him and I’m not gonna apologize for having great goaltending.”

If we get technical, there were only three teams that relied on their starting goalie more than the Canucks, as Demko ranked fourth in total ice time last season — playing over 3,700 minutes. That’s the eighth-most minutes played in a season by a goalie all-time in franchise history, with only Roberto Luongo (three times), Alex Auld, Kirk McLean (twice), and Gary Smith playing more.

There are multiple ways to look at the time-on-ice stat for goaltenders. On one hand, four of the top-six goalies in minutes played were on playoff teams, with Demko and Connor Hellebuyck the exceptions. On the other hand, two of the top six goalies (Juuse Saros and Tristan Jarry) suffered late-season injuries, and their teams were ousted in the first round of the playoffs.

It goes beyond minutes played though. Demko was spectacular on many nights and was named team MVP at the end of the season for that reason.

Boudreau doesn’t have to apologize for Demko playing great, but a great goalie alone won’t take the Canucks to the next level.

That’s a job for management though, more than the coach. Boudreau believes he can compete and win with the team he’s got, and to be fair that’s exactly what the Canucks did under his watch.

The Canucks went 32-15-10 under Boudreau, posting the 11th-best points percentage (.649) after he took over behind the bench.

Boudreau also pointed out that his team was top-five defensively with him in charge, and indeed that’s true. They ranked fifth in goals-against per game (2.67) since December 6.

So while Rutherford said the Canucks were one of the worst teams in the league at zone exits, Boudreau is pushing back.

“We may not have had the best entries or exits, whatever, but we were a top five defensive team in the league [after I took over]. So we must have done something else right that helped us do what we were doing… We do good things, not maybe as well as some other teams but other things that other teams didn’t do as well, we did better, and it usually equals out in the end.”

The question is, how much of that is sustainable, and what more needs to be done to get the Canucks on a Stanley Cup trajectory?

Rutherford and GM Patrik Allvin don’t seem fooled by the Canucks overachieving down the stretch, so they’re looking to improve in multiple areas. Part of the plan appears to get Boudreau to tweak some systems play next season, but of course, it’ll be Allvin’s job to improve the roster.

The Canucks are going to be more analytics-focused under Rutherford, and Boudreau has admitted that he has some learning to do in that area. Ultimately, the key is winning, and the Canucks racked up more W’s under Boudreau than most thought was possible with the roster he had.