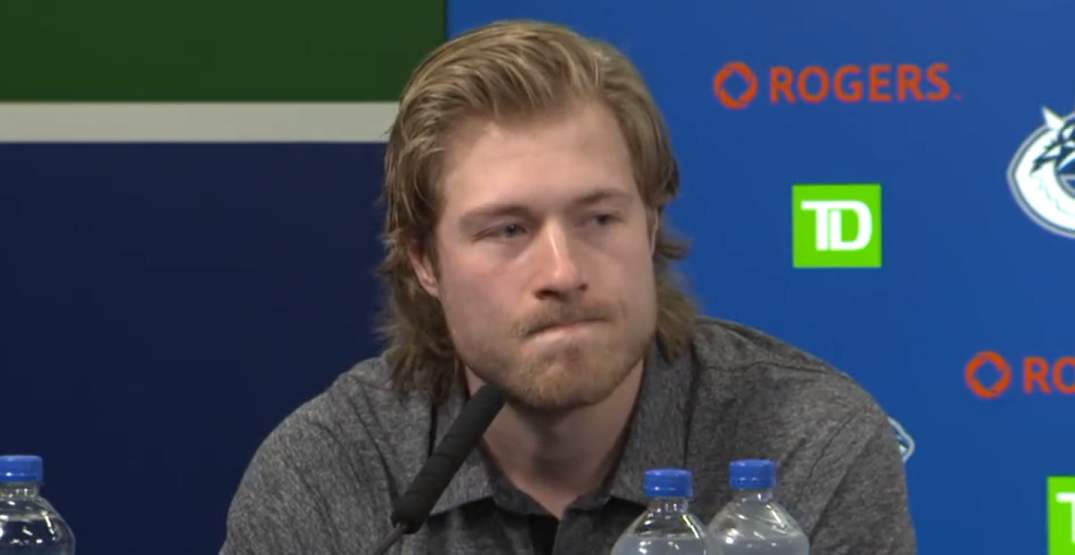 Vancouver Canucks forward Brock Boeser admitted that he didn’t have the season he hoped for this past year.

In 71 games with the Canucks, the 25-year-old winger put up 23 goals and 23 assists for a total of 46 points, which was the lowest points-per-game average of his five-year career.

“It was a tough year. I felt that could have been better for the team,” Boeser said at Sunday’s end of season media availability. “When Bruce [Boudreau] took over [as coach], I think I started find my game and score goals and get confident again. There are some things away from the rink that were tough this year, so it was definitely a challenging year.”

Asked about specific ways he could improve his game, Boeser touched on being a more well-rounded two-way player.

“Just 200 foot game I think you know, I really took pride last year and making sure you know, I was getting the D zone. I know I felt I wasn’t as good in the zone this year and a little details like that and showing up on a consistent basis,” Boeser said. “I think if I can fix that and be more consistent for this team, we could get a few more wins.”

Then asked specifically about his father Duke’s health, Boeser began to get emotional. Boeser had previously shared details about his father living with Parkinson’s back in 2020 but had mostly kept the matters private.

“No, I can answer that,” an emotional Boeser said before a long pause.

Prayers up for Brock Boeser and his entire family. 🙏♥️ #Canucks pic.twitter.com/htYeafzwfF

Canucks fans were strong in their support for the Boeser family.

My heart goes out to Brock Boeser. It's some perspective that we fans need. To his credit he has never used his father's difficult battle with both cancer and Parkinson's as an excuse, but you know it can't be far from his mind. All you can do is wish them both the best. #Canucks

Wanna give Brock Boeser a hug

Boeser’s teammates podium-side were also clearly touched by the moment.

“We’re gonna need Brock to be really good if we want to be good,” Hughes said. “I think it’s important for him to go home to Minnesota and spend good quality time with his family and enjoy the summer and then come back ready to go. I think he’ll do that. He’s a motivated kid. And he’ll be fine. He’s gonna come back he’s gonna have a great year next year.”