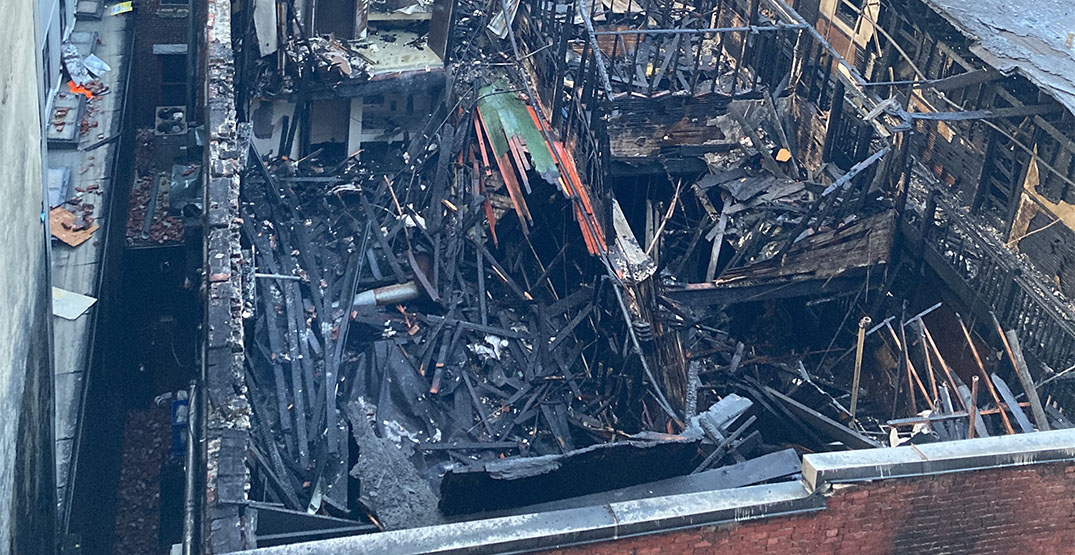 A body has been located during the demolition of the Winters Hotel at 203 Abbott Street in Gastown, Vancouver Fire and Rescue Services (VFRS) has confirmed.

Investigators and demolition crew said in a statement that they’ve been mindful that individuals may have been in the building, and have been proceeding with appropriate caution and care.

“The fire was too extensive and situation deemed too dangerous to allow firefighters into areas on floor two (where the fire originated) and above, which means an ‘all clear’ was not determined,” VFRS said in a statement.

According to VFRS, in a fire like this firefighters typically conduct a primary and secondary search for occupants.

“Given the 203 Abbott St. fire was a defensive attack, firefighters performed a primary search, exited the building and fought the fire from the outside.”

An investigation into the death has been referred to the Vancouver Police Department, which has engaged the BC Coroners Service. The VFRS statement suggests that the Coroner has attended the site.

Building demolition will resume after an all-clear is provided by BC Coroners Service.

“We appreciate the media’s avoidance of the scene out of respect for the deceased,” the VFRS statement continues.

Demolition began earlier this week on April 19, and just yesterday on April 21, the cause of the fire was revealed. VFRS determined the fire was accidental, caused by a candle that was unattended.

The City of Vancouver’s earliest estimate on when businesses in the area could open up was scheduled for April 22, and it is unclear whether the new development will cause further delays.