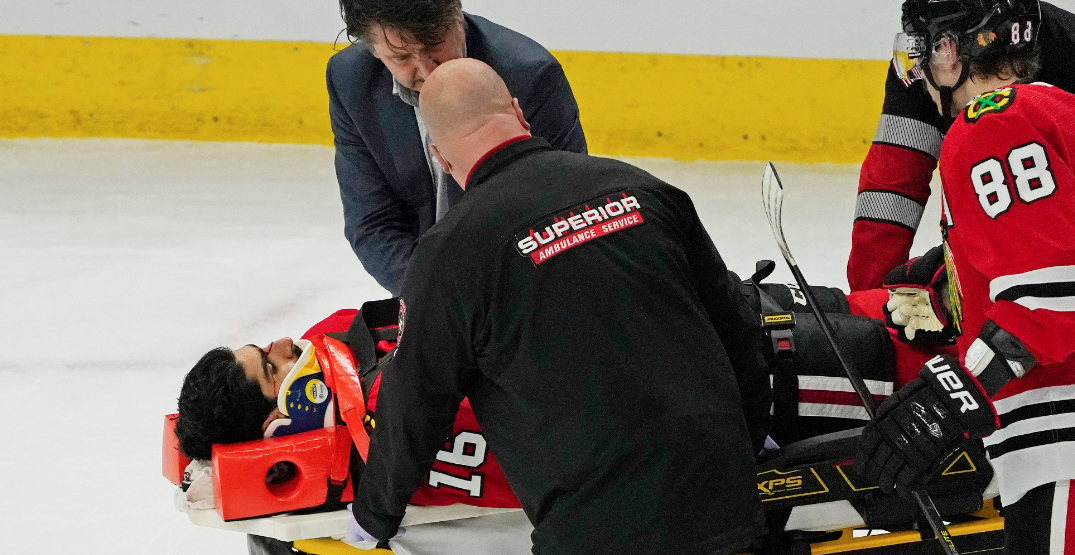 Chicago Blackhawks forward Jujhar Khaira has been released from hospital and is resting at home following a scary scene Tuesday night against the New York Rangers.

Khaira, who played 258 games over parts of six seasons with the Edmonton Oilers from 2015-2022, was taken off the ice on a stretcher following a hit by Rangers defenceman Jacob Trouba during the second period.

“Despite the significant injury, his prognosis is excellent, and we expect a full recovery. At this point, it is too early to put a timeline on return to play.”

Jujhar Khaira leaves the ice on a stretcher. #Blackhawks pic.twitter.com/FQ13rQdFJn

Khaira has played 18 games this season with the Blackhawks.

Khaira missed two games after sustaining a blow to the head in a fight with Calgary Flames forward Brett Ritchie on March 15, 2021.

Jeez, Jujhar Khaira to the room after this punch from Brett Ritchie to end their fight pic.twitter.com/OPNJToCOzW

He returned March 30 against the Montreal Canadiens, but left the contest early in the first period after taking a hit from defenceman Alexander Romanov and missed the next five games.

Dave Tippett believes Khaira may have hurt himself trying to hit Suzuki and slamming his head into the glass before he was buckled by Romanov a few seconds later. Either way #Oilers will be careful before putting him back in the lineup. #Canadiens #NHL pic.twitter.com/uJ4Rhi7WZe