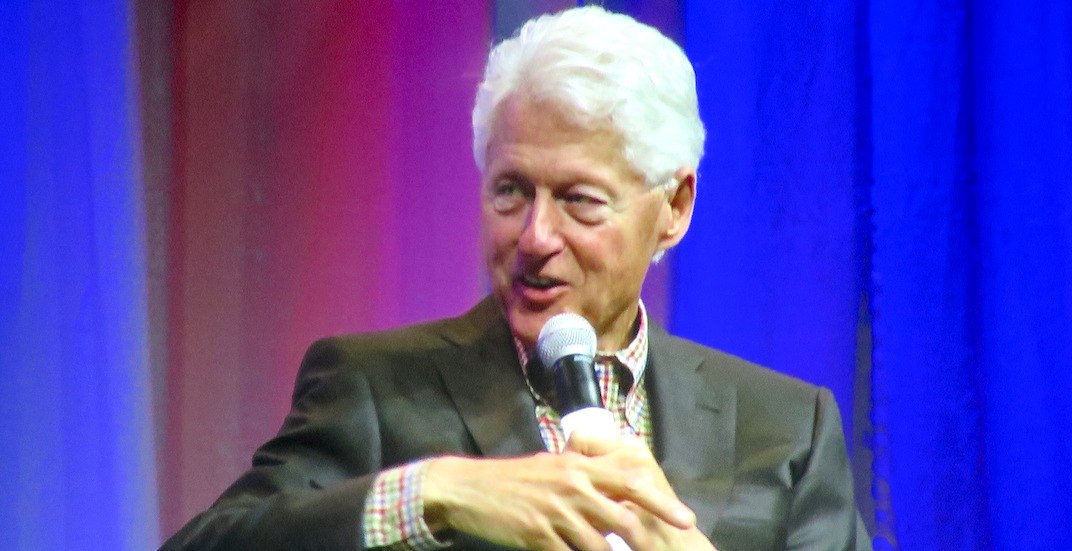 The 42nd president of the United States is in Vancouver today to promote his first novel, The President Is Missing.

Bill Clinton has written four books, including his 2004 autobiography My Life, however, his latest fictional political thriller – co-written with author James Patterson – is “something relatively unprecedented that will make an important point.”

Speaking to a crowd at the Vancouver Convention Centre this afternoon, he says the novel tells the story of what exactly would happen in a situation where a fictional president somehow went missing as a result of a coordinated attack on the state.

“[There are] some descriptions of how the president goes missing, but it has physically changed since 9/11,” said Clinton.

“The tunnels of the walkways under the White House are different and what used to be empty rooms were used for Dick Cheney to hide in, for example. Well not to hide in, but to be secure in.”

“I have to confess that when I was in Toronto [for the book tour], I didn’t have the heart to tell them we ‘blew up’ their subway system,” he said, causing the crowd to break out in laughter.

Much of the novel focuses on theoretical cyber crimes that could conceivably happen in real life. An attack on critical computer networks could not only cause the electricity to go out for a few hours, but it may even permanently erase bank records and medical records.

Patterson, who was also present during today’s event, lamented the fact that the United States does not spend enough on cyber defence. Its federal budget on defence totals $680 billion, but only about $15 billion goes towards protecting the country from threats of cyber attacks. And as a result, the country is at risk of falling behind other nation states.

Clinton added that it has come to a point where he wants to see similar international treaties on military defence for cyber defence. 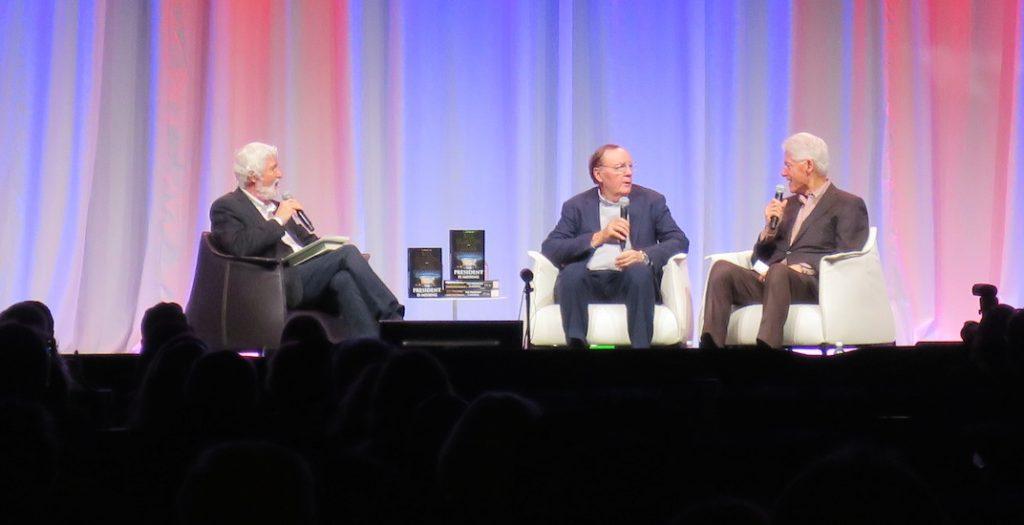 Clinton also briefly touched on the current divisive political climate in domestic situations around the world, including in his home country.

“When there is economic or social or cultural tension within the country, the quickest way to build support is to pick an enemy and make it an ‘us versus them’ fight. And that has been a standard of operating procedure,” said Clinton. “This ‘us versus them’ politics is basically threatening the gains of the last 30 years.

“Putin has maintained his power in Russia while the economy is going down because people think he has restored global respect for Russia while beating the hell out of his targets, and I think that’s true. But we were moving [away] from the Cold War, until recently, toward the idea that if you wanted the world to work, you needed inclusive prosperity and inclusive societies and inclusive political participation.”

On the subject of the American economy and the vocality of Trump supporters, who are largely the white working class, Clinton says this group has a “legitimate beef” as manufacturing jobs have disappeared and those jobs have not been replaced by new industries.

“We also know most of that is from automation and dramatic improvements in productivity in manufacturing, and because America has not had any fresh incentives since the one I passed in 2001 to invest in those areas,” he continued.

“What the Republicans understood was that if they could do whatever they could do to keep anything from passing, keep an infrastructure program and incentives from passing, those people would blame the president. And they would get more and more angry, and they would blame whoever is coming along after. So it is a very bad thing if in your political system, you get rewarded for exacerbating the problems that made people mad in the first place.”

Clinton’s next book stop tour is Saturday evening at Seattle’s McCaw Hall. It was announced last fall that The President Is Missing would be adapted into a drama television series on Showtime.