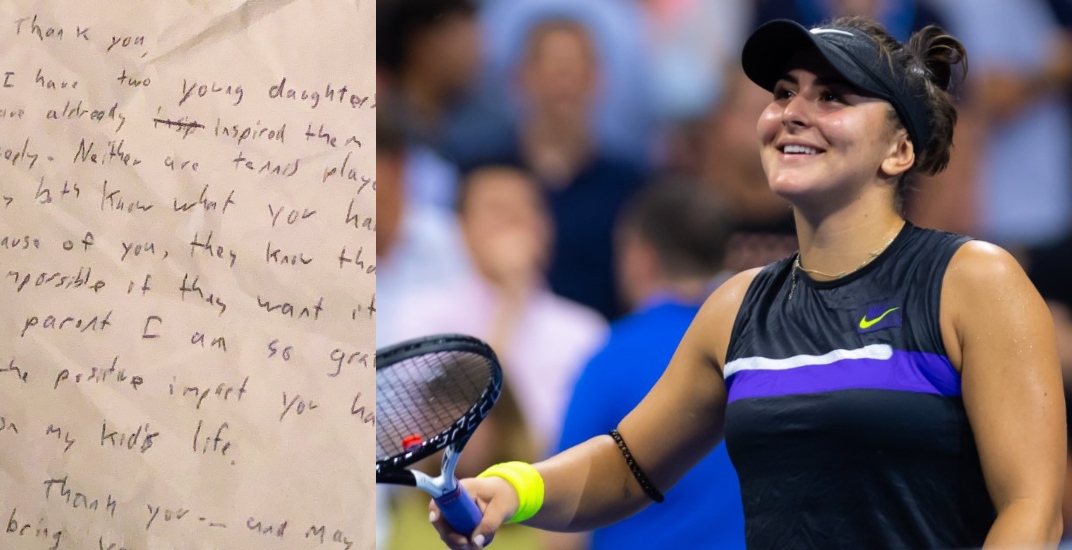 Bianca Andreescu got a nice surprise recently while travelling on an airplane.

For most of us mere mortals, extra leg room would qualify as a nice surprise on a flight, but for the US Open champ, life is just a little bit different nowadays.

A father of two young girls handed Andreescu a letter written on an airplane napkin, thanking the 19-year-old Canadian for the influence she’s had on his daughters.

“The best thing about what I do is this,” Andreescu wrote in a message posted to her social media accounts. “It brought tears to my eyes because sometimes I don’t understand the impact that I’ve made, and continue to make in [people’s] lives accomplishing what I’ve accomplished. Or acting how I act. So receiving this makes me feel so fulfilled.”

Here’s the full message, written by the man who identified himself only as “A Canadian.”

I have two young daughters. You have already inspired them both deeply. Neither are tennis players, but they both know what you have done, because of you, they know that nothing is impossible if they want it enough. As a parent, I am so grateful for the positive impact you have made on my kids’ life.

Thank you, and may your journey bring you as much joy as you have brought others,

Andreescu has had a breakout season for the ages, rising from relative obscurity last year as the 243rd-ranked player in the world to a Canadian-record No. 4 ranking this week. Her season not only includes the first-ever Grand Slam title won by a Canadian singles player, but also prestigious wins at Indian Wells and the Rogers Cup in Toronto.

“I’ve always wanted to do good in this world somehow and have a positive impact on [people’s] lives,” Andreescu said. “This isn’t where it ends [though], I want to continue to do so much in bigger ways. I’m very grateful to have a platform in which I can achieve that.

“So thank you to the guy that wrote me this and to everyone who has sent me mail or [message] requests. I’m beyond grateful.”