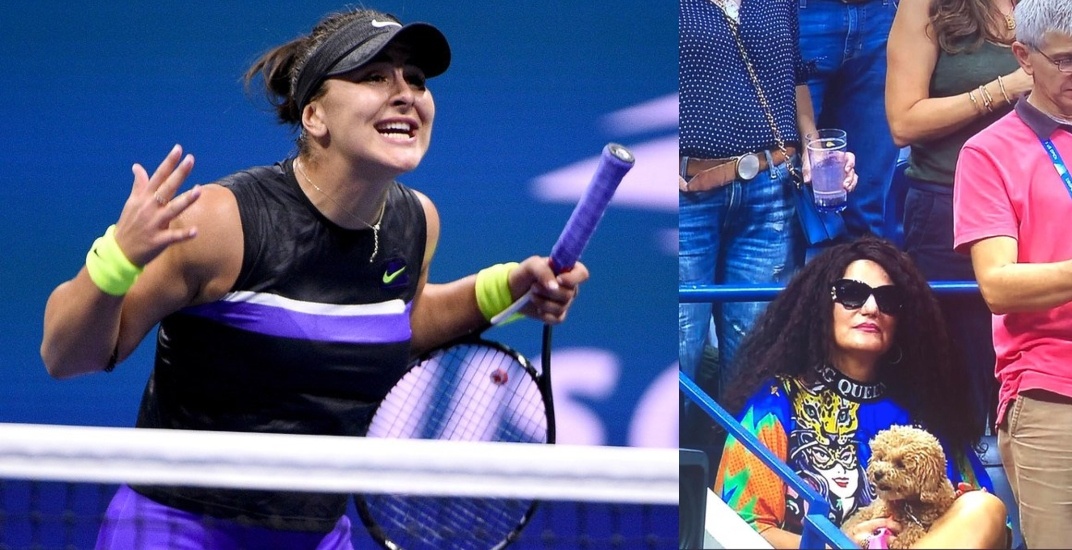 Bianca Andreescu wasn’t the only member of her family that stole the hearts of Canadians over the past two weeks at the US Open.

As the 19-year-old made her historic run in New York, fans became increasingly infatuated with her mother, Maria.

Despite pressure-packed matches and an electric atmosphere, Maria somehow managed to remain perfectly calm. Sitting next to her husband and Bianca’s father Nicu, Maria had the look of a Hollywood celebrity while watching their only child on the world stage.

She was at her absolute best during the quarter-finals, wearing sunglasses at night and a fashion-forward top that read “Dog Queen,” complete with the family pet, Coco, sitting on her lap.

Bianca Andreescu is through to the semis at the US Open, but I'm all about her Mom. I can only assume it is a Canadian tribute to be rocking the sunglasses at night. I can only hope she tops this outfit for the next game. And @kateberlant will play her in the TV movie. pic.twitter.com/tbXGjw8Ddi

“My mom’s honestly the coolest person I know,” Bianca later said in a post-match interview.

Mama Andreescu was a little more understated for the semi-finals, rocking a Louis Vuitton shawl — yet the sunglasses and level-headed demeanour remained the same.

How do you stay calm when your daughter is playing like this at the #USOpen ??

Bianca’s mom: Are you dumb look at me.

Mama Andreescu looking like she’s about to catch a flight to #TIFF2019 after this. 🎾 🇨🇦 🍿 pic.twitter.com/jpzTDVM6LG

Don’t let her calm disposition fool you, Maria is extremely proud of her daughter, something that’s clear to see with a visit to her Instagram account, which is basically a Bianca fan page.

Vegas with my Angel

The spotlight was never brighter on Maria and her daughter than during the final at the US Open on Saturday. So much so, that Bianca felt compelled to acknowledge her mother’s style on social media.

andreescu: *wins the biggest game of the match*
her mom: pic.twitter.com/2zk74h1nAl

Daughter wins first set of her biggest match of her life against greatest of all time in #USOpen final
Bianca Andreescu’s mom: pic.twitter.com/blwasqilCk

“This is actually hilarious,” Bianca said in response to a gif of her mother clapping like the Queen of England on Twitter. “My mom’s a straight G. I’ll never be that cool.”

Bianca’s parents immigrated to Canada from Romania in 1994, six years before the future tennis star was born in Mississauga.

“We arrived in Canada with two suitcases and that’s all,” Nicu told the Globe and Mail earlier this year.  “We had a great first impression when we arrived, having come from a former communist country. We wanted to go to Canada and start a new life and have a better future for any kids we might have.”

“Hopefully soon, I’ll start making enough money that they can travel with me. I’d definitely love that,” Bianca added.

Safe to say that after winning $3.85 million USD in prize money at the 2019 US Open alone, that dream can now be a reality.