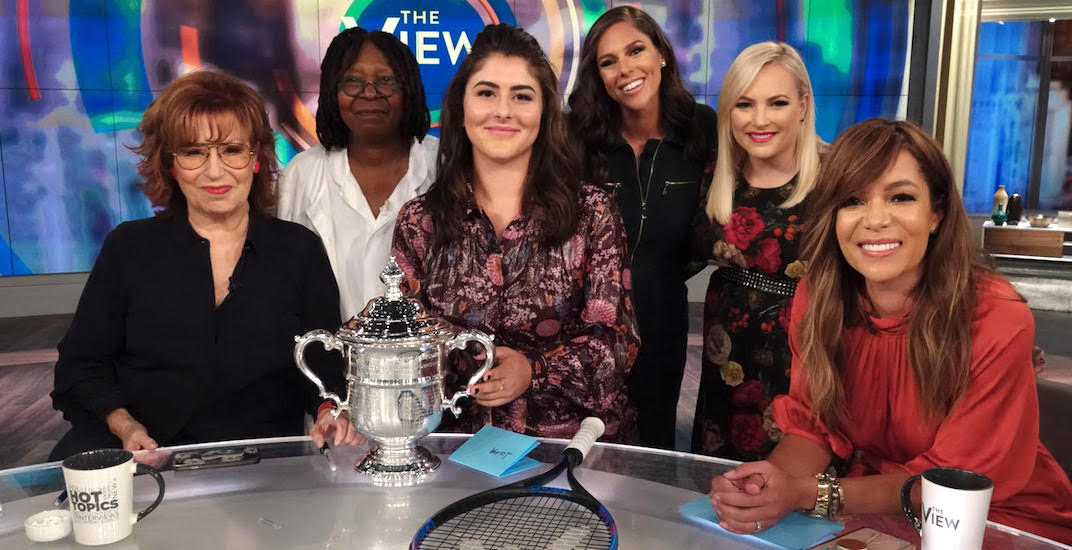 Bianca Andreescu has had no shortage of limelight over the past few days.

On Saturday, the 19-year-old won the US Open Championship in New York, becoming the first Canadian ever to win a major singles title. On Monday, she skyrocketed to No. 5 on the WTA world rankings.

Not to mention, she’s received hundreds of congratulatory messages along the way, including professional athletes, sports teams, and even Prime Minister Justin Trudeau.

So what would be a better way to cap off her tremendous achievement than making appearances on some of America’s biggest talk shows?

It was a busy Monday in New York for Andreescu, as she appeared on Good Morning America, The Today Show, The View, Live with Kelly and Ryan, and The Tonight Show Starring Jimmy Fallon to talk about her recent success.

On Good Morning America, Andreescu told host Robin Roberts that she’s been visualizing this moment since she was 12 years old.

.@Bandreescu_ tells @RobinRoberts she's been visualizing winning the #USOpen since she was 12 and she used to write fake winning checks to herself. "We create our reality with our mind," she said. https://t.co/MlhKp3cufX pic.twitter.com/tdNseZh3uz

.@Bandreescu_ tells @RobinRoberts it's hard to put into words what winning the #USOpen means to her: "I was just in awe of everything. I was just telling myself all that hard work paid off." https://t.co/MlhKp3cufX pic.twitter.com/LBqh4E5R2o

On The Today Show, she talked about the emotional moment when she won the US Open – saying all the injuries she went through were worth it.

“I’ve been through a lot of injuries… all I can say is that all those tough times are worth it.” #USOpen champion @Bandreescu_ talks to us about her big win against Serena Williams pic.twitter.com/zSJgGo9XJw

Then it was off to The View, answering questions from Whoopi Goldberg and company. Andreescu was asked about apologizing to the crowd following the match, saying: “that’s such a Canadian thing to do.”

Live with Kelly and Ryan

On Live with Kelly and Ryan, Andreescu described the work that she put in to get to this point: “It’s not an overnight success. I’ve been working for this moment for 10 years now.”

Between a Grand Slam title and meeting some of the United States’ biggest television personalities, the only thing she’s still waiting on is a shoutout from Drake.

After receiving congrats messages from many of her fellow Canadians, #USOpen Champ @Bandreescu_ hopes for one from Drake #FallonTonight pic.twitter.com/Qkk3T2lyxS